Molecules to Cells: Which came first - the catalysts or the hereditary molecules?

A discovery with profound implications for discussions of the origin of life is that RNA (ribonucleic acid), another nucleic acid, is capable of catalyzing its own processing.

Which came first-the catalysts or the hereditary molecules?

A discovery with profound implications for discussions of the origin of life is that RNA (ribonucleic acid), another nucleic acid, is capable of catalyzing its own processing. Until this discovery, catalytic activity was associated exclusively with proteins. RNA, rather than DNA, is now considered by many scientists to have been the original coding material, and it still serves this function in some viruses. The idea that catalysis and coding both occur in one molecule has provided a point of departure for more research on the origins of life.

The “RNA world” is the current conventional wisdom, but many unanswered questions exist regarding this point of view.

According to the RNA-world theory, the appearance of a form of RNA capable of coding for its own replication was the pivotal point in the origin of life. Polynucleotides can direct the formation of molecules whose sequence is an exact copy of the original. This process depends on a template mechanism (Figure 1.7), which is highly effective in producing exact copies but is a rela-tively slow process. A catalyst is required, which can be a polynucleotide, even the original molecule itself. Polypeptides, however, are more efficient catalysts than polynucleotides, but there is still the question of whether they can direct the formation of exact copies of themselves. Recall that in present-day cells, the genetic code is based on nucleic acids, and catalysis relies primarily on pro-teins. How did nucleic acid synthesis (which requires many protein enzymes) and protein synthesis (which requires the genetic code to specify the order of amino acids) come to be? According to this hypothesis, RNA (or a system of related kinds of RNA) originally played both roles, catalyzing and encoding its own replication. Eventually, the system evolved to the point of being able to encode the synthesis of more effective catalysts, namely proteins (Figure 1.8). Even later, DNA took over as the primary genetic material, relegating the more versatile RNA to an intermediary role in directing the synthesis of proteins under the direction of the genetic code residing in DNA. A certain amount of controversy surrounds this theory, but it has attracted considerable attention recently. Many unanswered questions remain about the role of RNA in the origin of life, but clearly that role must be important. 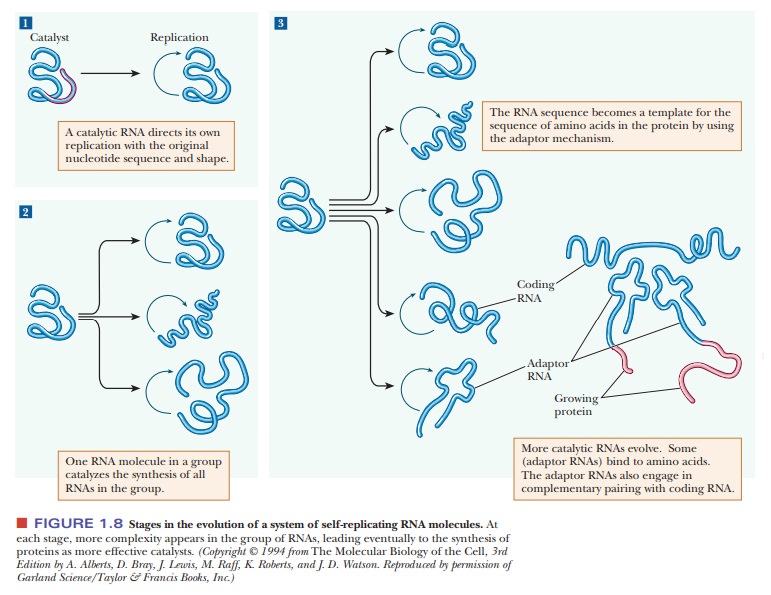 Another key point in the development of living cells is the formation of membranes that separate cells from their environment. The clustering of cod-ing and catalytic molecules in a separate compartment brings molecules into closer contact with each other and excludes extraneous material. For reasons we shall explore, lipids are perfectly suited to form cell membranes (Figure 1.9). For a particularly good summary of this scenario. This article was the grand-prize winner in an essay contest for young scientists. 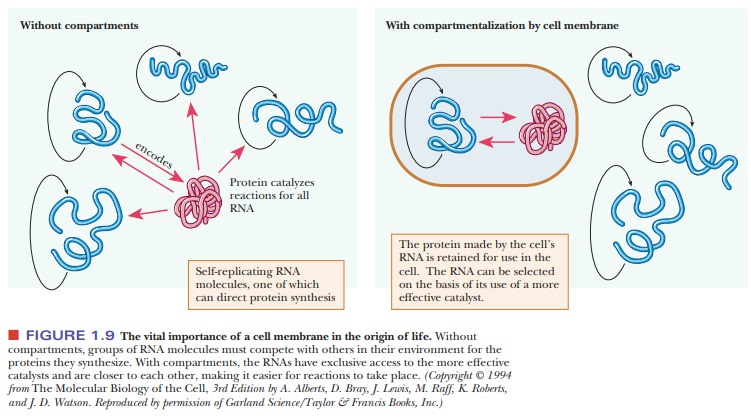 Some theories on the origin of life focus on the importance of proteins in the development of the first cells. A strong piece of experimental evidence for the importance of proteins is that amino acids form readily under abiotic conditions, whereas nucleotides do so with great difficulty. Proteinoids are artificially synthesized polymers of amino acids, and their properties can be compared with those of true proteins. Although some evidence exists that the order of amino acids in artificially synthesized proteinoids is not com-pletely random-a certain order is preferred-there is no definite amino acid sequence. In contrast, a well-established, unique amino acid sequence exists for eachprotein produced by present-day cells. According to the theory that gives primaryimportance to proteins, aggregates of proteinoids formed on the early Earth, probably in the oceans or at their edges. These aggregates took up other abioti-cally produced precursors of biomolecules to become protocells, the precursors of true cells. Several researchers have devised model systems for protocells. In one model, artificially synthesized proteinoids are induced to aggregate, forming structures called microspheres. Proteinoid microspheres are spherical in shape, as the name implies, and in a given sample they are approximately uni-form in diameter. Such microspheres are certainly not cells, but they provide a model for protocells. Microspheres prepared from proteinoids with catalytic activity exhibit the same catalytic activity as the proteinoids. Furthermore, it is possible to construct such aggregates with more than one type of catalytic activity as a model for primitive cells.

Note that these aggregates lack a coding system. Self-replication of peptides (coding and catalysis carried out by the same molecule) has been reported, but that work was done on isolated peptides, not on aggregates.

Recently, attempts have been made to combine several lines of reasoning about the origin of life into a double-origin theory. According to this line of thought, the development of catalysis and the development of a coding system came about separately, and the combination of the two produced life as we know it. The rise of aggregates of molecules capable of catalyzing reactions was one origin of life, and the rise of a nucleic acid-based coding system was another origin.

A theory that life began on clay particles is a form of the double-origin theory.

According to this point of view, coding arose first, but the coding material was the surface of naturally occurring clay. The pattern of ions on the clay sur-face is thought to have served as the code and the process of crystal growth is thought to have been responsible for replication. Simple molecules, and then protein enzymes, arose on the clay surface, eventually giving rise to aggregates that provided the essential feature of compartmentalization. At some later date, the rise of RNA provided a far more efficient coding system than clay, and RNA-based cells replaced clay-based cells. This scenario assumes that time is not a limiting factor in the process.

At this writing, none of the theories of the origin of life is definitely estab-lished, and none is definitely disproved. The topic is still under active investi-gation. It seems highly unlikely that we will ever know with certainty how life originated on this planet, but these conjectures allow us to ask some of the important questions, such as those about catalysis and coding, that we are going to see many times in this text.

Our solar system, including the Earth, is postulated to have been formed from chemical elements produced by first-generation stars. The early Earth had an atmosphere that consisted of simple chemical compounds.

The atmospheric conditions of the early Earth allowed the formation of molecules, such as amino acids, that play a role in life processes.

Several theories describe the origin of living cells from component mol-ecules. All require explanations for coding and for catalytic activity, and all assign an important role to RNA.