How and when did the Earth come to be?

The Beginnings of Biology: Origin of Life

The Beginnings of Biology: Origin of Life

The Earth and Its Age

To date, we are aware of only one planet that unequivocally supports life: our own. The Earth and its waters are universally understood to be the source and mainstay of life as we know it. A natural first question is how the Earth, along with the Universe of which it is a part, came to be.

How and when did the Earth come to be?

Currently, the most widely accepted cosmological theory for the origin of the Universe is the big bang, a cataclysmic explosion. According to big-bang cosmol-ogy, all the matter in the Universe was originally confined to a comparatively small volume of space. As a result of a tremendous explosion, this “primordial fireball” started to expand with great force. Immediately after the big bang, the Universe was extremely hot, on the order of 15 billion (15 × 109) K. (Note that Kelvin temperatures are written without a degree symbol.) The average temperature of the Universe has been decreasing ever since as a result of expansion, and the lower temperatures have permitted the formation of stars and planets. In its earliest stages, the Universe had a fairly simple composition. Hydrogen, helium, and some lithium (the three smallest and simplest elements on the periodic table) were present, having been formed in the original big-bang explosion. The rest of the chemical elements are thought to have been formed in three ways: (1) by thermonuclear reactions that normally take place in stars, (2) in explosions of stars, and (3) by the action of cosmic rays outside the stars since the formation of the galaxy. The process by which the elements are formed in stars is a topic of interest to chemists as well as to astrophysicists. For our purposes, note that the most abundant isotopes of biologically impor-tant elements such as carbon, oxygen, nitrogen, phosphorus, and sulfur have particularly stable nuclei. These elements were produced by nuclear reactions infirst-generation stars, the original stars produced after the beginning of the Universe (Table 1.2). Many first-generation stars were destroyed by explosions called supernovas, and their stellar material was recycled to produce second-generation stars, such as our own Sun, along with our solar system. Radioactive dating, which uses the decay of unstable nuclei, indicates that the age of the Earth (and the rest of the solar system) is 4 billion to 5 billion (4 × 109 to 5 × 109) years. The atmosphere of the early Earth was very different from the one we live in, and it probably went through several stages before reaching its cur-rent composition. The most important difference is that, according to most theories of the origins of the Earth, very little or no free oxygen (O2) existed in the early stages (Figure 1.3). The early Earth was constantly irradiated with ultraviolet light from the Sun because there was no ozone (O3) layer in the atmosphere to block it. Under these conditions, the chemical reactions that produced simple biomolecules took place. 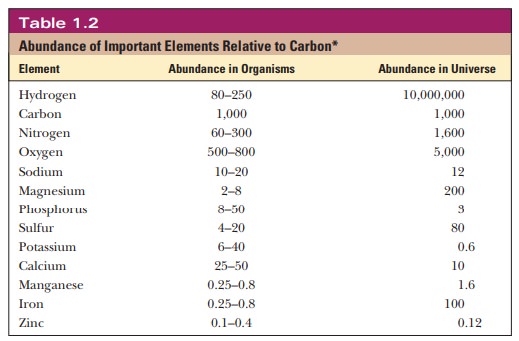 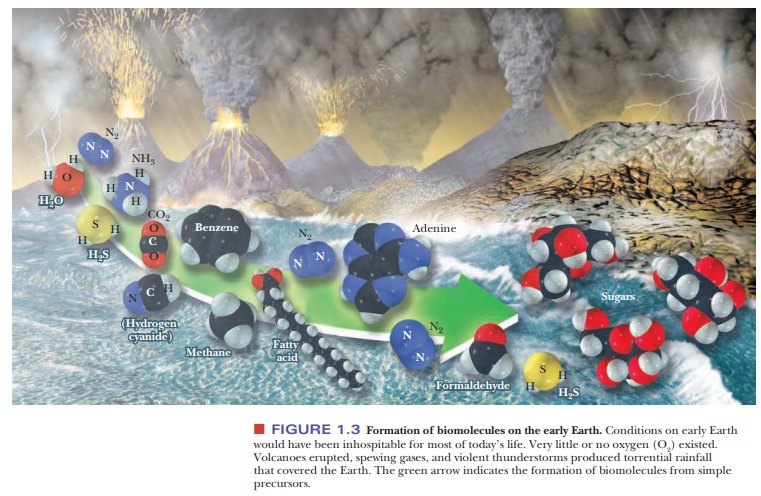 The gases usually postulated to have been present in the atmosphere of the early Earth include NH3, H2S, CO, CO2, CH4, N2, H2, and (in both liquid and vapor forms) H2O. However, there is no universal agreement on the rela-tive amounts of these components, from which biomolecules ultimately arose. Many of the earlier theories of the origin of life postulated CH4 as the carbon source, but more recent studies have shown that appreciable amounts of CO2 must have existed in the atmosphere at least 3.8 billion (3.8 × 109) years ago.

This conclusion is based on geological evidence: The earliest known rocks are 3.8 billion years old, and they are carbonates, which arise from CO2. Any NH3 originally present must have dissolved in the oceans, leaving N2 in the atmosphere as the nitrogen source required for the formation of proteins and nucleic acids.

Study Material, Lecturing Notes, Assignment, Reference, Wiki description explanation, brief detail
Biochemistry: Biochemistry and the Organization of Cells : How and when did the Earth come to be? |