How is prokaryotic DNA organized without a nucleus?

Although no well-defined nucleus is present in prokaryotes, the DNA of the cell is concentrated in one region called the nuclear region. This part of the cell directs the workings of the cell, much as the eukaryotic nucleus does.

Although no well-defined nucleus is present in prokaryotes, the DNA of the cell is concentrated in one region called the nuclear region. This part of the cell directs the workings of the cell, much as the eukaryotic nucleus does.

How is prokaryotic DNA organized without a nucleus?

The DNA of prokaryotes is not complexed with proteins in extensive arrays with specified architecture, as is the DNA of eukaryotes. In general, there is only a single, closed, circular molecule of DNA in prokaryotes. This circle of DNA, which is the genome, is attached to the cell membrane. Before a pro-karyotic cell divides, the DNA replicates itself, and both DNA circles are bound to the plasma membrane. The cell then divides, and each of the two daughter cells receives one copy of the DNA (Figure 1.10). 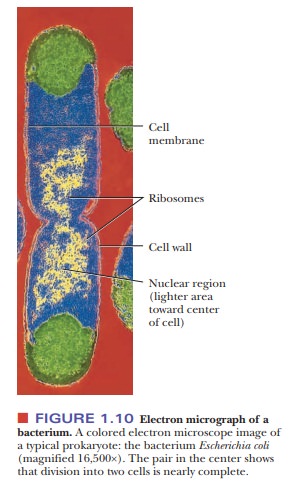 In a prokaryotic cell, the cytosol (the fluid portion of the cell outside the nuclear region) frequently has a slightly granular appearance because of the presence of ribosomes. Because these consist of RNA and protein, they are also called ribonucleoprotein particles; they are the sites of protein synthesis in all organisms. The presence of ribosomes is the main visible feature of prokaryotic cytosol. (Membrane-bound organelles, characteristic of eukaryotes, are not found in prokaryotes.)

Every cell is separated from the outside world by a cell membrane, or plasma membrane, an assemblage of lipid molecules and proteins. In addition to the cell membrane and external to it, a prokaryotic bacterial cell has a cellwall, which is made up mostly of polysaccharide material, a feature it shareswith eukaryotic plant cells. The chemical natures of prokaryotic and eukaryotic cell walls differ somewhat, but a common feature is that the polymerization of sugars produces the polysaccharides found in both. Because the cell wall is made up of rigid material, it presumably serves as protection for the cell.

Prokaryotes have a nuclear region, which contains DNA, and ribosomes, the site of protein synthesis, as their main features. They have a cell mem-brane, but do not have an internal membrane system.