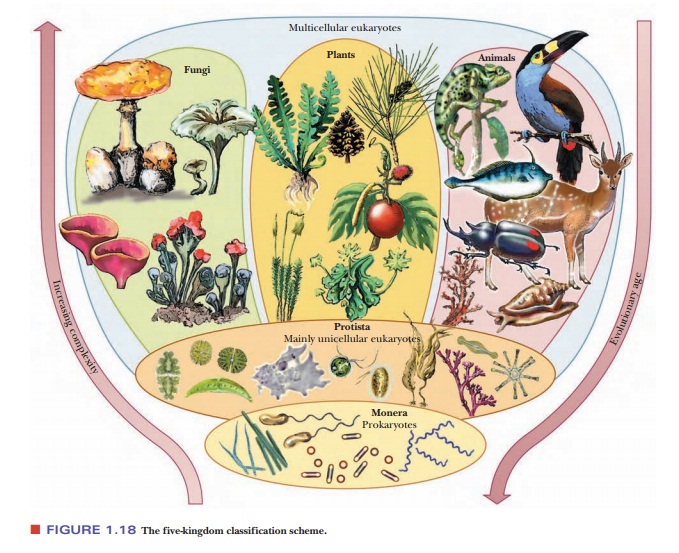 How do scientists classify living organisms today? Is there a simpler basis for classifying organisms?

Living organisms can be classified in many possible ways. The original biologi-cal classification scheme, established in the 18th century, divided all organisms into two kingdoms: the plants and the animals. In this scheme, plants are organisms that obtain food directly from the Sun, and animals are organisms that move about to search for food. There are many other methods, however. For example, one could distinguish life based on whether the organism had a cell wall or not, or whether the organism was single-celled or not.

With the original classification, researchers discovered that some organ-isms, bacteria in particular, do not have an obvious relationship to either king-dom. It has also become clear that a more fundamental division of living organ-isms is actually not between plants and animals, but between prokaryotes and eukaryotes. In the 20th century, classification schemes that divide living organ-isms into more than the two traditional kingdoms have been introduced.

A five-kingdom system takes into account the differences between prokaryotes and eukaryotes, and it also provides classifications for eukaryotes that appear to be neither plants nor animals.

The kingdom Monera consists only of prokaryotic organisms. Bacteria and cyanobacteria are members of this kingdom. The other four kingdoms are made up of eukaryotic organisms. The kingdom Protista includes unicel-lular organisms such as Euglena, Volvox, Amoeba, and Paramecium. Some protists, including algae, are multicellular. The three kingdoms that consist mainly of multicellular eukaryotes (with a few unicellular eukaryotes) are Fungi, Plantae, and Animalia. The kingdom Fungi includes yeasts, molds, and mushrooms. Fungi, plants, and animals must have evolved from simpler eukaryotic ances-tors, but the major evolutionary change was the development of eukaryotes from prokaryotes (Figure 1.18). 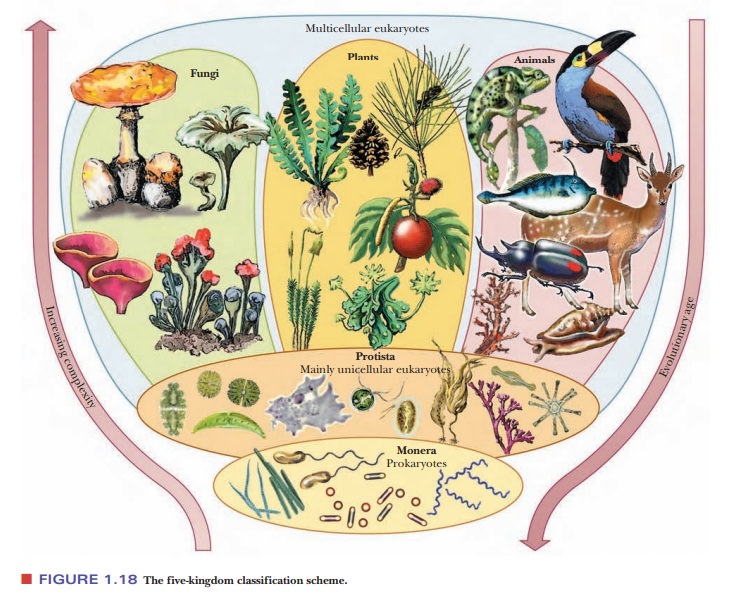 One group of organisms can be classified as prokaryotes in the sense that the organisms lack a well-defined nucleus. These organisms are called archae-bacteria (early bacteria) to distinguish them from eubacteria (true bacteria)because there are marked differences between the two kinds of organisms. Archaebacteria are found in extreme environments (see the Biochemical Connections box) and, for this reason, are also called extremophiles. Most of the differences between archaebacteria and other organisms are biochemical features, such as the molecular structure of the cell walls, membranes, and some types of RNA.

Is there a simpler basis for classifying organisms? 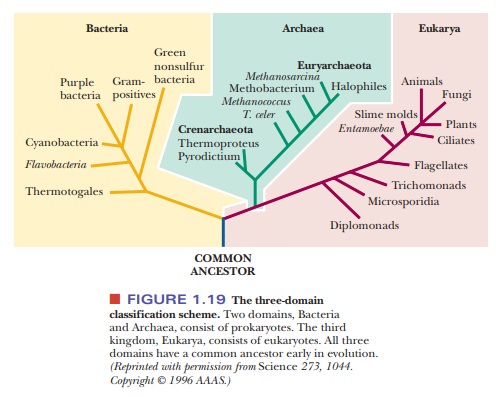 The three-domain classification scheme will certainly become more impor-tant as time goes on. A complete genome of the archaebacterium Methanococcusjannaschii has been obtained. More than half the genes of this organism (56%) differ markedly from genes already known in both prokaryotes and eukaryotes, a piece of evidence that lends strong support to a three-domain classifica-tion scheme. Complete genomes are being obtained for organisms from all three domains. They include those of bacteria such as Haemophilus influenzae and Escherichia coli, the latter being a bacterium in which many biochemical pathways have been investigated. Complete sequences for eukaryotes such as Saccharomyces cerevisiae (brewer’s yeast), Arabidopsis thaliana (mouse-ear cress),and Caenorhabditis elegans (a nematode) have been obtained (Figure 1.20). The sequencing of the genomes of the mouse (Mus musculus) and Drosophila mela-nogaster (a fruit fly) has also been completed, with genome sequences of manymore organisms on the way. The most famous of all genome-sequencing proj-ects, that for the human genome, has received wide publicity, with the results now available on the World Wide Web. 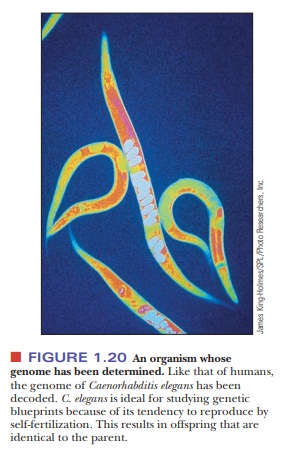 In the five-kingdom classification scheme, prokaryotes have a kingdom to themselves (Monera). The remaining four kingdoms-protists, fungi, plants, and animals-consist of eukaryotes.

In the three-domain classification schemes, eukaryotes have a domain to themselves. Two domains consist of prokaryotes. Eubacteria are the commonly encountered prokaryotes. Archaea are organisms that live in extreme environments such as those that were found on the early Earth.