Let us consider a very simple system to illustrate the concept of entropy.

Let us consider a very simple system to illustrate the concept of entropy. We place four molecules in a con-tainer. There is an equal chance that each molecule will be on the left or on the right side of the container. Mathematically stated, the probability of finding a given molecule on one side is 1/2. We can express any prob-ability as a fraction ranging from 0 (impossible) to 1 (completely certain). We can see that 16 possible ways exist to arrange the four molecules in the container. In only one of these will all four molecules lie on the left side, but six possible arrangements exist with the four molecules evenly distributed between the two sides. Aless ordered (more dispersed) arrangement is more probable than a highly ordered arrangement. Entropy is definedin terms of the number of possible arrangements of molecules.

Boltzmann’s equation for entropy, S, is S = k ln W. In this equation, the term W represents the number of possible arrangements of molecules, ln is the logarithm to the base e, and k is the constant universally referred to as Boltzmann’s constant. It is equal to R/N where R is the gas constant and N is Avogadro’s number (6.02 × 1023), the number of molecules in a mole. 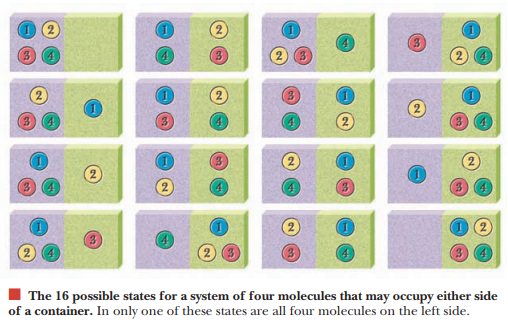