Appearing in the Early Devonian with the dipnoans are the three clades referred to as tetrapodamorphs. 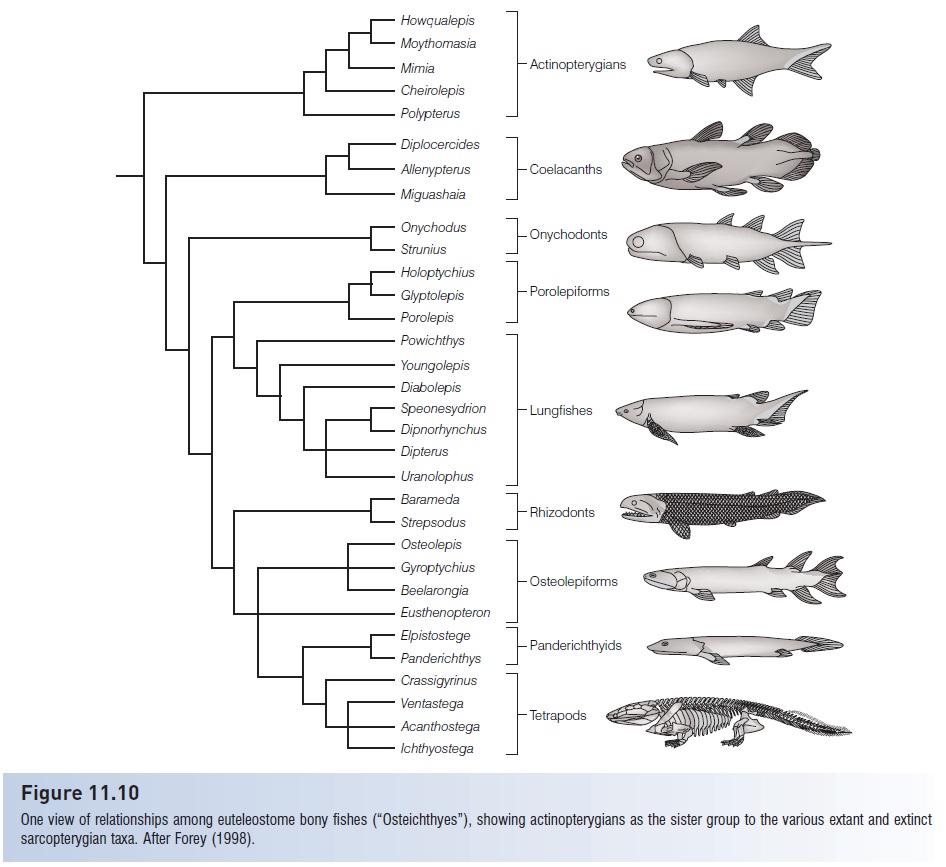 Tetrapodamorphs as a group were large, predatory fishes characterized by sarcopterygian traits such as two dorsal fins, cosmine covering of the bones and scales, kinetic (jointed) skulls, lobed fins, and replacement teeth on the jaw margins. They remained common throughout the latter half of the Paleozoic, and most forms disappeared by the end of the Permian. Some were large (up to 4 m long), cylindrically shaped predators that occurred primarily in shallow, freshwater habitats (Fig. 11.13). Evolutionary trends include reduction in dermal bone thickness, a change from diamond- to round-shaped scales, and an increasingly symmetrical tail. The latter trait is often considered indicative of a hydrostatic function for the gas bladder (Moy-Thomas & Miles 1971). 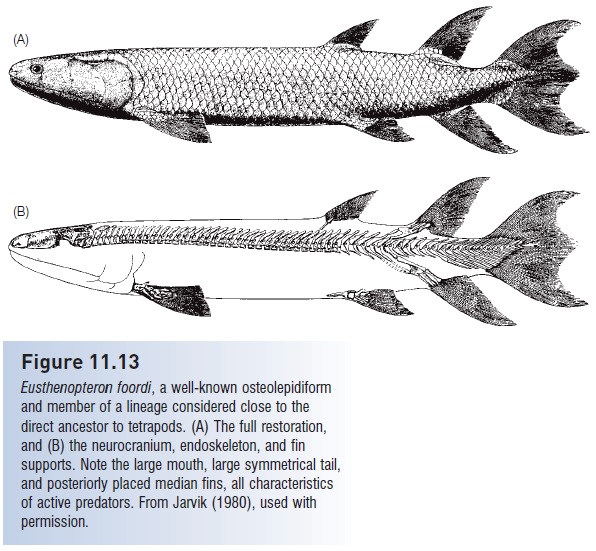 Eusthenopteron foordi, a well-known osteolepidiform and member of a lineage considered close to the direct ancestor to tetrapods. (A) The full restoration, and (B) the neurocranium, endoskeleton, and fin supports. Note the large mouth, large symmetrical tail, and posteriorly placed median fins, all characteristics of active predators. From Jarvik (1980), used with permission.

Of the three groups, we know most about the osteolepidiforms and especially the tristichopterid Eusthenopteron foordi because of exceedingly well-preserved material painstakingly prepared by E. Stensiö and associates (Fig. 11.13). One specimen alone required 6 years of serial grinding and many more years of analysis to characterize just the anatomy of the skull of this fish. Jarvik (1980) commented that we probably know more about the skeletal anatomy of Eusthenopteron than we do about most extant fishes. This knowledge is fundamental to our understanding of the anatomical transitions that occurred as sarcopterygians changed from purely aquatic forms capable of breathing atmospheric oxygen to semiterrestrial forms capable of movement on land and no longer dependent on gills (Fig.11.14).

Presumed key traits that characterized the sarcopterygian ancestors of tetrapods, as evidenced by Eusthenopteron. Among the traits are (A) an intracranial joint in the skull roof associated with the profundus nerve foramen; (B) the arrangement of the dermal skull bones; (C) axial elements of the pectoral fin skeleton (e.g., humerus, ulna, ulnare); and (D) support skeleton of the second dorsal fin. After Ahlberg and Johanson (1998).

Although osteolepidiforms possessed many homologies with later tetrapods, these fishes were unlikely to have been transitional forms to living on land, even temporarily. It is the elpistostegalians that are generally considered the most likely sister group of modern tetrapods. Focus has been placed on many apparent homologies, including eye position, skull roof bones, paired fins, dentition, and vertebral accessories (Pough et al. 1989, 2005; Forey 1998). Elpistostegalians and tetrapods both have eyes set close together on the top of the skull facing upwards, with eyebrowlike ridges. The median series of skull roof bones – frontals, parietals, and nasals – may be homologous, although not all workers agree on terminology. The paired fins of the osteolepidiforms and elpistostegalians are very similar to those of the stem non-amniote tetrapods of the Upper Devonian, such as Ichthyostega (Fig. 11.15). This fin type contains bones homologous to the proximal elements of tetrapod fore- and hindlimbs (humerus, radius, ulna; femur, tibia, fi bula), unlike the axially arranged, leafl ike archipterygial fins of the dipnoans. 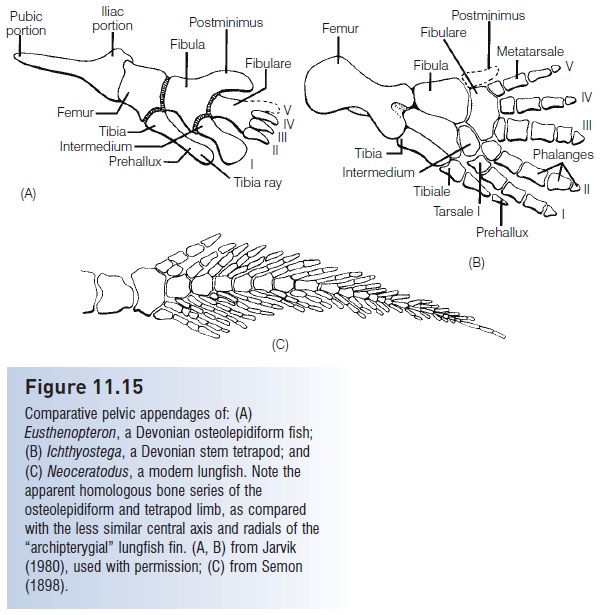 Comparative pelvic appendages of: (A) Eusthenopteron, a Devonian osteolepidiform fish; (B) Ichthyostega, a Devonian stem tetrapod; and (C)Neoceratodus, a modern lungfish. Note the apparent homologous bone series of the osteolepidiform and tetrapod limb, as compared with the less similar central axis and radials of the “archipterygial” lungfish fin. (A, B) from Jarvik (1980), used with permission; (C) from Semon (1898).

The tetrapodomorph fin could provide improved body support for benthic locomotion, perhaps including movement across land. The dentition of both osteolepidimorphs and early tetrapods was very similar, consisting of conical teeth with numerous infoldings of the dentine, termed labyrinthodont dentition, although this may have been a convergent trait among large carnivorous vertebrates (see Pough et al. 2005). Both groups also had ossified neural spines that grew dorsally from ring-shaped, ossified, vertebral centra.

The search for the putative missing link between piscine sarcopterygians and early tetrapods (the latter no longer classified as amphibians) was greatly clarified with publication in 2006 of the description of Tiktaalik roseae and a discussion of its place in the vertebrate lineage. Few fossil discoveries, aside from those involving hominid ancestors, have received as much media attention.