A calcified cartilaginous skeleton and internal fertilization, among other traits, link the Holocephali (“whole heads”) with the elasmobranchs.

A calcified cartilaginous skeleton and internal fertilization, among other traits, link the Holocephali (“whole heads”) with the elasmobranchs. Holocephalans arguably date back to at least the Late Devonian (Fig. 11.29). Holocephalans and elasmobranchs are considered to form a monophyletic unit with the shared, derived traits of prismatic endoskeletal calcifi cation and pelvic claspers. The stem group is debated, but a Middle Devonian braincase from Bolivia of an animal named Pucapampella has been proposed as ancestral. 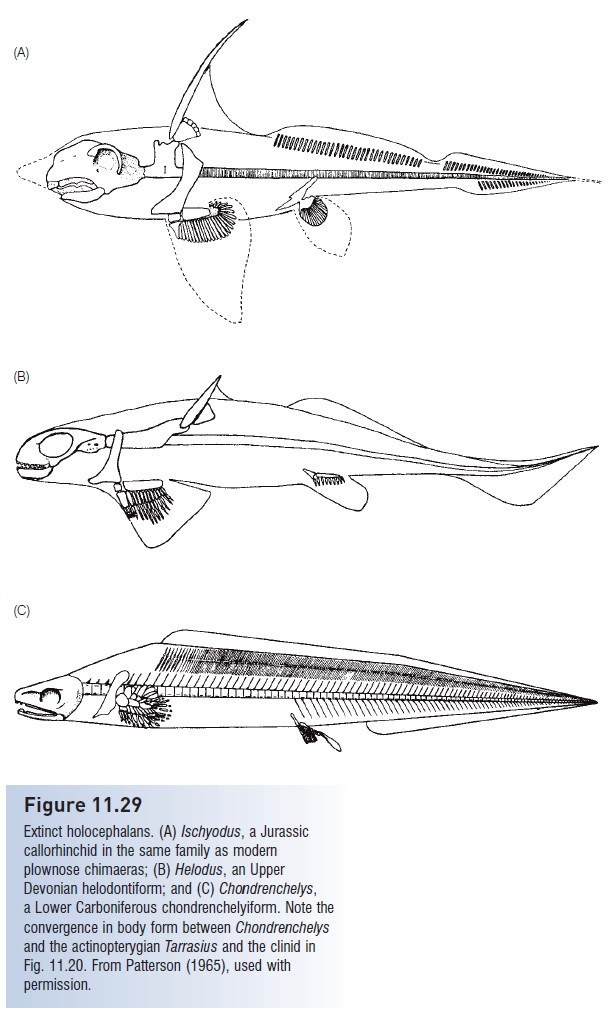 Regardless, holocephalans differ in many respects from elasmobranchs. Most notable is the position and structure of the gill chamber, which is located further forward than in sharks and has a single opercular opening covering four gill openings. Holocephalans have non-protrusible jaws because the palatoquadrate (upper jaw) is fused to the braincase (=autostylic suspension); in modern elasmobranchs the upper jaw gains mobility via a posterior hyomandibula and an anterior ligamentous connection to the chondrocranium (=hyostylic suspension). Most fossil and all modern chimaeras and ratfishes have tooth plates on the jaw margins that continue to grow during ontogeny; iniopterygians and eugeneodontiforms had replacement dentition. Tail form in holocephalans is variable but often of a diphycercal nature, hence the “ratfish” designation for extant chimaeras.

Chimaeras are a truly ancient group of fishes, the living members of which represent a very small subset of a previously diverse clade. Recent work has identified (with contention) two superorders and 13 orders of holocephalans, 12 of which are extinct. Even two of the three suborders of Chimaeriformes, the order containing all modern forms, are extinct. None of the extinct forms existed into the Cenozoic, and all three modern holocephalan families have fossil records dating back to the Jurassic and Cretaceous. Early holocephalans showed a tremendous diversity of form, including orodontids that reached 4 m in length and debeeriids that did not exceed 10 cm in length. Some petalodontiforms such as Janassa were skatelike in morphology and others such as Belantsea were globose and almost pufferfishlike in shape. Chondrenchelys was eel-like (Fig. 11.29C). A chimaera in Greek mythology was an imaginary monster constructed of incongruous parts.

The past few decades have seen an impressive increase in discoveries of fossil holocephalans, largely through the untiring efforts of Eileen Grogan and Richard Lund . In our 1997 edition, we anticipated “fossil discoveries [that would help] develop a more meaningful synthesis” of relationships among holocephalans.