The superclass Gnathostomata is characterized by a number of innovations lacking in jawless forms.

The superclass Gnathostomata is characterized by a number of innovations lacking in jawless forms. Jaws are present, derived from gill arches. Paired limbs with skeletal support are usually present, as is endochondral bone, three semicircular canals, anddentine-based rather than horny teeth. However, no clearly intermediate fossils between jawed and jawless forms have been found. The origins of jaws and the other structures that characterized the early gnathostomes are buried in the fossil record, belonging to some group yet to be discovered. Homologies between the gill arches of osteostracomorphs and the jaws of later groups are unclear, and the early fossils of jawed fishes already possessed jaws, teeth, scales, and spines. To further complicate our understanding of chronology and phylogeny is the age of different fossils versus the widely held view that placoderms preceded acanthodians and may have been ancestral to chondrichthyans. However, chondrichthyan scales and denticles have been found in Late Ordovician deposits, acanthodians show up later in the Lower Silurian, and the earliest placoderms do not appear “until” the Middle Silurian (Nelson 2006). 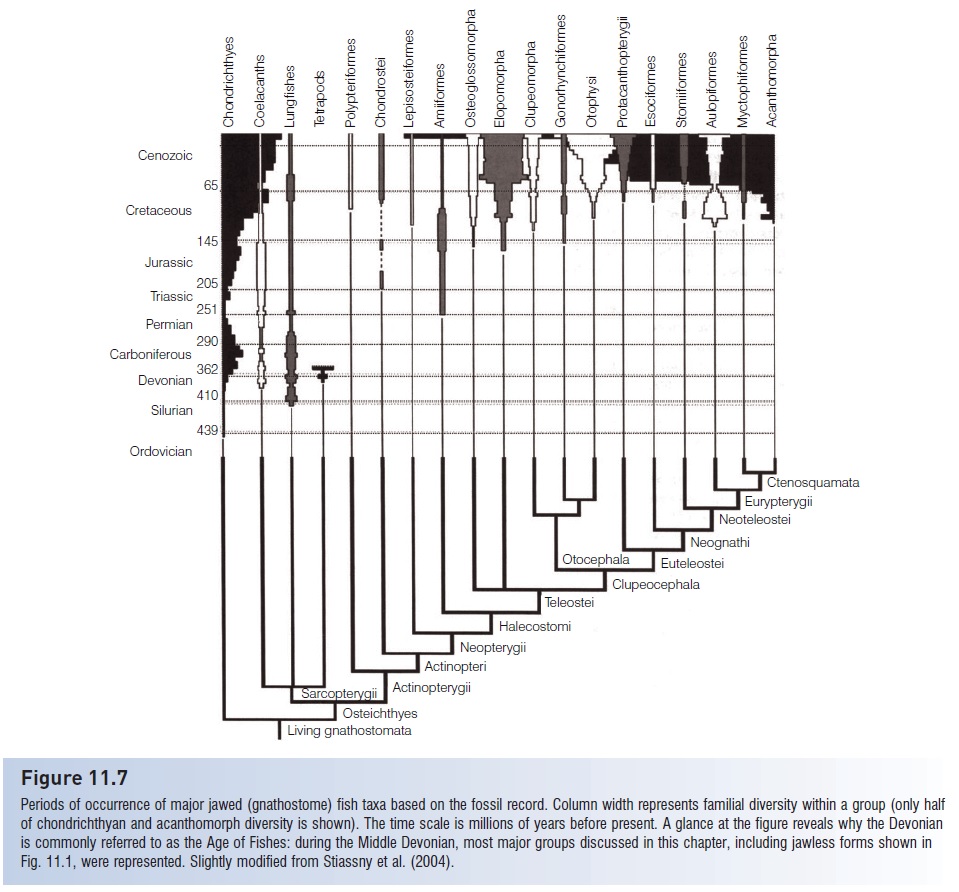 Periods of occurrence of major jawed (gnathostome) fish taxa based on the fossil record. Column width represents familial diversity within a group (only half of chondrichthyan and acanthomorph diversity is shown). The time scale is millions of years before present. A glance at the figure reveals why the Devonian is commonly referred to as the Age of Fishes: during the Middle Devonian, most major groups discussed, including jawless forms shown in Fig. 11.1, were represented. Slightly modified from Stiassny et al. (2004).

What we do have is an abundance of fossil material that gives us a clear picture of the diversity of forms that the innovation of jaws must have permitted, with groups proliferating and with many early groups giving rise to extant taxa (Fig. 11.7). The evolutionary importance of true jaws cannot be overemphasized: “perhaps the greatest of all advances in vertebrate history was the development of jaws and the consequent revolution in the mode of life of early fishes” (Romer 1962, p. 216).

This revolution included a diversifi cation of the food types that early fishes could eat. Large animal prey could be captured and dismembered, and hard-bodied prey could be crushed. Agnathous fishes were probably limited to planktivory, detritivory, parasitism, and microcarnivory. Stomachs for storage of food evolved, probably as a consequence of jaws that could bite off pieces of food. With the advent of jaws, both carnivory and herbivory on a grand scale became possible, as reflected in the size of the fishes that soon evolved. Jaws also allowed for active defense against predators, leading to de-mphasis on armor, which in turn meant greater mobility and fl exibility. This increase in agility was greatly enhanced by the development of paired, internally supported pectoral and pelvic appendages, “the most outstanding shared derived charac- ter of the gnathostomes besides the jaw” (Pough et al. 1989, p. 235).