The oldest fossils of relatively advanced, jawed fishes belong to Acanthodians, or “spiny sharks”, from Late Ordovician deposits. Their Latin name refers to the stout median and paired spines evident in most fossils; their similarity to sharks is largely superfi cial and few current authors feel they are related to modern chondrichthyans (but see Jarvik 1980). Acanthodians were generally small (20 cm to 2.5 m); occurred in both salt and fresh water, mostly in Laurasia; had cartilaginous skeletons; a body covered with small, non-overlapping scales; large heads; and large eyes. Their streamlined, round bodies, reduced armor when compared to ostracoderms, subterminal mouths often studded with teeth (including teeth inside the mouth and on the gill rakers), and fin placement indicate they were water column, not benthic, feeders. Given the success of ostracoderms in benthic habitats, it is not surprising that the next fish group to evolve would occupy the relatively unexploited water column. 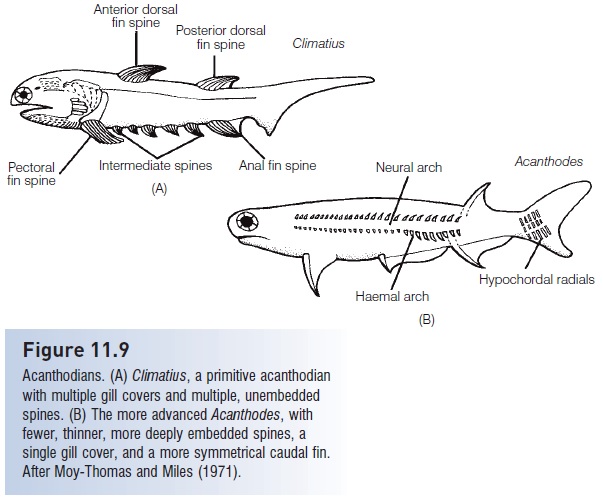 Three orders, nine families, and at least 60 genera of acanthodians have been described, many from isolated spines and teeth (Carroll 1988). All three orders show interesting parallels in evolution. Early acanthodians had multiple gill covers, broad unembedded spines anterior to all fins except the caudal, as well as additional spine pairs between the pectoral and pelvic fins (Fig. 11.9A). More advanced species had single gill covers and lost the ancillary paired spines, the remaining spines being thinner and embedded in the body musculature (e.g., Acanthodes, Fig. 11.9B). Some specialized lineages were toothless and had long gill rakers, indicating a planktivorous habit. Because acanthodians possessed a third (horizontal) semicircular canal and neural haemal arches associated with the unconstricted vertebral column, and other shared, derived traits (otoliths, lateral line canals, ossified operculum, branchiostegals, cranial and jaw series, including the new interhyal bone), they are included within the Teleostomi (Lauder & Liem 1983; Maisey 1986). Acanthodians survived until the Early Permian, outlasting the major ostracoderm groups by 100 million years.