Vertebrate craniates possess, among other features, a dermal skeleton and neural crest, the latter describing regions of the developing nerve cord that are precursors to gill arches, pigment cells, connective tissue, and bone.

Vertebrate craniates possess, among other features, a dermal skeleton and neural crest, the latter describing regions of the developing nerve cord that are precursors to gill arches, pigment cells, connective tissue, and bone. Within the vertebrates are seven superclasses of fishes, five of which are extinct.

Between Late Proterozoic and Late Triassic times (600 to 200 mybp), a group of animals known as conodonts (“coneshaped teeth”) arose, proliferated, and died in seas worldwide. The fossil remains, referred to as conodont “elements”, consist of toothlike structures generally about 1 mm long and made from calcium phosphate (Fig. 11.2). Known since the mid-1800s, their abundance allowed them to serve as stratigraphic landmarks in determining the age of fossil beds. It was not until the 1980s that fossilized soft body parts were discovered, allowing speculation on true relationships (Briggs et al. 1983; Smith et al. 1987). 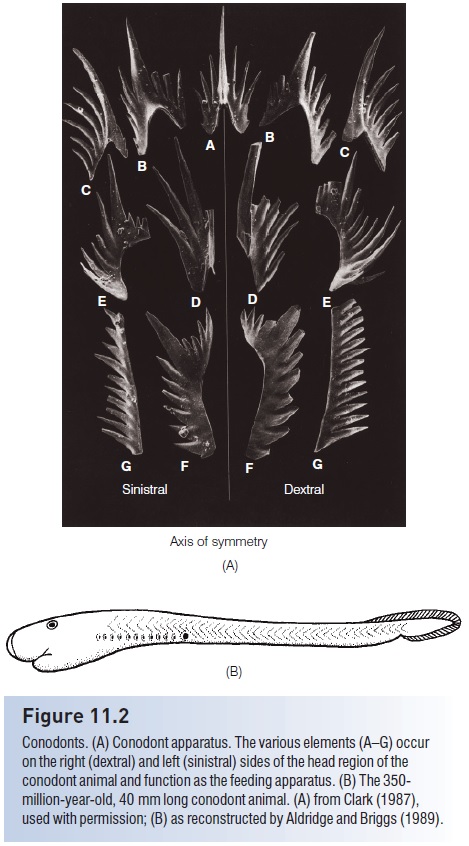 Conodonts. (A) Conodont apparatus. The various elements (A–G) occur on the right (dextral) and left (sinistral) sides of the head region of the conodont animal and function as the feeding apparatus. (B) The 350- million-year-old, 40 mm long conodont animal. (A) from Clark (1987), used with permission; (B) as reconstructed by Aldridge and Briggs (1989).

Before these discoveries, the elements were identified variously as copulatory structures of nematodes, as radulae of snails, and as jaws of annelid worms, among other things. More conservative authors generally placed the animals in a separate, extinct phylum, the †Conodonta, with uncertain relationships (Clark 1987).

The recent discoveries and subsequent reanalyses indicate that the earliest “protoconodonts” of the Paleozoic and Early Cambrian may likely have been invertebrates aligned to chaetognaths (Donoghue et al. 2000). Later euconodonts (“true conodonts”) that arose in the Late Cambrian are true chordates, with V-shaped muscle blocks, a bilobate head and cartilaginous head skeleton, eyes contained in otic capsules, extrinsic eye muscles, a compressed body, axial lines suggestive of a notochord, and unequal tail fins supported by raylike elements (Donoghue et al. 1998) (Fig. 11.2B).

The total body length ranged between 4 and 40 cm. The conodont elements were contained in the head region and apparently functioned as teeth. Eyeballs and extrinsic eye muscles, chevron-shaped muscle blocks, and apparent bone cells in a dermal skeleton of some species strongly suggest that not only were conodonts chordates, but they may even be classified as vertebrates (Gabbott et al. 1995; Janvier 1995; Purnell 1995).

What are the affinities then of this ancient, highly successful, tooth-bearing, primitive chordate/vertebrate? Initially following the discovery of the actual animal, the popular interpretation was that the conodont elements were dentition homologous to the rasping, book-closing action of modern hagfishes, placing conodonts near the base of the hagfish lineage. However, more complete, cladistic analysis incorporating multiple structures and taxa indicates that conodonts constitute a separate, extinct superclass and class that arose after the earliest myxine hagfishes and petromyzontomorph lampreys, i.e., they are more derived than hagfishes and lampreys and may even be basal to the jawed fishes that arose later (Donoghue et al. 1998, 2000).

The first fishes, conodonts aside, were historically termed ostracoderms (“shell-skinned”), in reference to a bony shield that covered the head and thorax. But ostracoderm is now considered an artifi cial designation that includes perhaps four distinct superclasses of jawless craniate fishes, the Pteraspidomorphi, Anaspida, Thelodonti, andOsteostracomorphi. Relationships between ostracoderm groups and modern jawless fishes such as hagfishes and lampreys remain speculative, with revised interpretations appearing as new fossil discoveries are made.

Pteraspidomorphi (or Diplorhina =“two nares”) derive their alternate name from impressions on the inside of the head plates indicating two separate olfactory bulbs in the brain. Pteraspidomorphs were jawless filter feeders in both marine and freshwater environments; they occurred from the Lower Silurian until the end of the Devonian. Three subclasses of pteraspidomorphs are recognized, the Astraspida, Arandaspida, and Heterostraci. Primitive forms, such as the Ordovician Astraspis, Arandaspis, and arandaspid Sacabambaspis, had symmetrical tails, full body armor, and multiple branchial openings (Fig. 11.3). 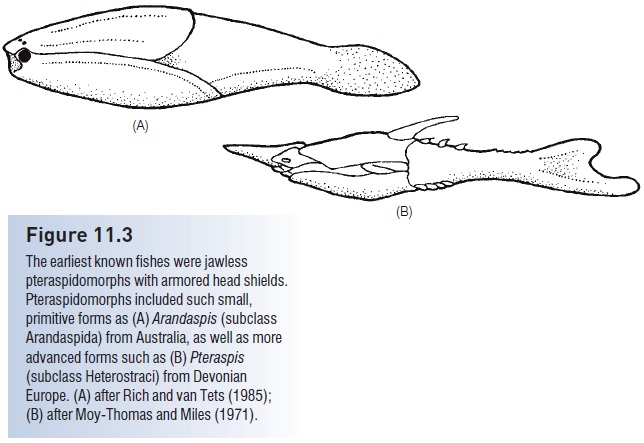 The earliest known fishes were jawless pteraspidomorphs with armored head shields. Pteraspidomorphs included such small, primitive forms as (A) Arandaspis (subclass Arandaspida) from Australia, as well as more advanced forms such as (B) Pteraspis (subclass Heterostraci) from Devonian Europe. (A) after Rich and van Tets (1985); (B) after Moy-Thomas and Miles (1971).

Heterostracans (“those with a different shell”) had dermal armor that extended from the head almost to the tail, necessitating swimming by lashing the tail back and forth, much like a tadpole. The tail in most forms was hypocercal, in that the notochord extended into the enlarged lower lobe of the tail. Their body form, armor, and tail morphology suggest that heterostracans plowed the bottom, pumping sediments into the ventral mouth, and filtering digestible material through the pharyngeal pouches. The armor is generally sutured and shows growth rings, indicating incremental growth. Early pteraspidiforms were small (c. 15 cm), but some heterostracans reached 1.5 m. Two orders, seven families, and more than 50 genera are recognized (see Denison 1970; Carroll 1988).

Later heterostracans, such as the pteraspidiform Pteraspis from the Lower Devonian, had hypocercal tails, fused dorsal and ventral head plates, and single branchial openings (Fig. 11.3B). The Devonian also produced highly derived forms, such as the sawfishlike Doryaspis and the tube-snouted, blind Eglonaspis. Trends in the development of pteraspidiform lineages include the reduction of armor through fusion of plates, narrowing of the head shield, and development of lateral, presumably stabilizing, projections (cornua). These changes all suggest strong selection for increased mobility and maneuverability. While these anatomical changes were taking place, pteraspidiforms invaded freshwater habitats (Carroll 1988).

The more fusiform, compressed anaspidiforms, such as Pharyngolepis (Fig. 11.4A), occurred from the Upper Silurian through the Late Devonian. They were seldom larger than 15 cm, and had pronounced hypocercal tails and terminal mouths. Anaspids originated in nearshore marine habitats and gradually entered fresh water. The anapsid body was covered largely with overlapping, tuberculate scales. One advance was the development of fl exible, lateral, finlike projections that had muscles and an internal skeleton, thus giving these small fishes considerable 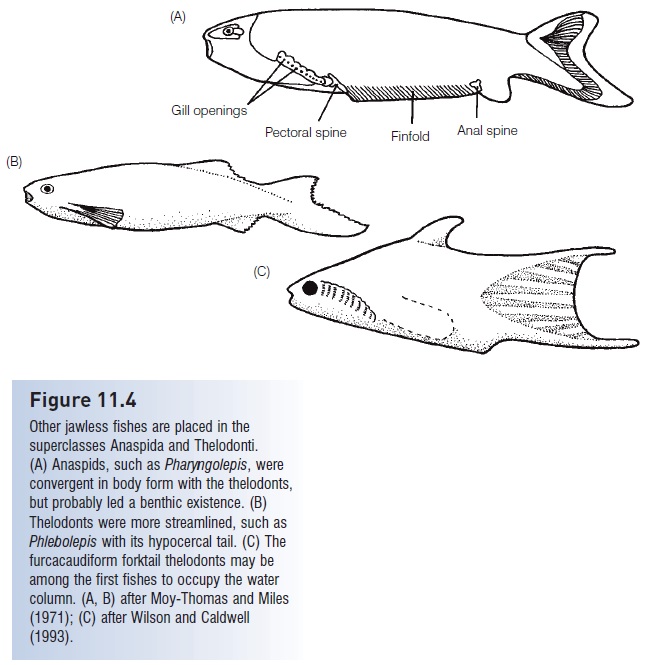 Other jawless fishes are placed in the superclasses Anaspida and Thelodonti. (A) Anaspids, such as Pharyngolepis, were convergent in body form with the thelodonts, but probably led a benthic existence. (B) Thelodonts were more streamlined, such as Phlebolepis with its hypocercal tail. (C) The furcacaudiform forktail thelodonts may be among the first fishes to occupy the water column. (A, B) after Moy-Thomas and Miles (1971); (C) after Wilson and Caldwell (1993).

Thelodonts (“nipple teeth”, also known as coelolepids or “hollow scales”) were diminutive (10–20 cm), fusiform, jawless fishes that were covered with denticles rather than bony plates (Fig. 11.4B). They were abundant and widespread, their denticles/scales serving as stratigraphic indicators in paleontological studies. Most were depressed, with a horizontal mouth, asymmetrical hypocercal tails, and a detectable lateral line that ran the length of the body. Many thelodonts had dorsal and anal “fins”. Their mode of life was probably similar to pteraspidiforms, namely skimming and filtering small organisms from bottom sediments while swimming, although genera with a fusiform body shape and terminal mouths suggest they may have been water column swimmers. A suprabenthic existence is almost certain for the recently discovered furcacaudiform (literally “forktail”) thelodonts of northwestern Canada (Fig. 11.4C). These were shaped like minnows or pupfishes and had compressed bodies, symmetrically forked tails, tubular mouths, and a stomach (Wilson & Caldwell 1993). Five orders and perhaps 14 families are recognized, with representatives from the Upper Ordovician to the Upper Devonian. Early thelodonts appear in marine deposits but later groups invaded fresh water. Nelson (2006) summarizes the diversity of viewpoints that exist about thelodont position and relationships.

The superclass Osteostracomorphi contains one class and three orders of jawless fishes. The highly diverse class Cephalaspidomorphi (or Monorhina =“single nostril”) first appears in the Upper Silurian, approximately 100 million years after the appearance of the pteraspidiforms. They too flourished until the end of the Devonian. They had two semicircular canals and evidence of true bone cells. The alternative name Monorhina refers to the single, median, slitlike opening, the nasohypophyseal foramen, in the anterior region of the head shield, associated with the pineal body.

The best known cephalaspidomorphs are a predominantly freshwater group, the Cephalaspidiformes (Fig. 11.5). These were abundant and diverse fishes; nearly 100 species just in the genus Cephalaspis have been described (see Jarvik 1980). Rather than acellular bone, cephalaspidiform armor was cellular. Another cephalaspidiform innovation, also evolved in jawed vertebrates, is ossifi cation of the endoskeleton. Paired lateral appendages in cephalaspidiforms are thought by some to be homologous to gnathostome pectoral fins (Nelson 2006). Unlike the armor of pteraspidiforms, cephalaspidiform head shields are sutureless and lack any apparent growth rings. In fact, all fossils of many species are the same size, suggesting a naked (nonfossilizing), growing larva that metamorphosed into an armored adult of fixed size. The head shield included one medial and two lateral regions (sensory fields) of small plates sitting in depressions and connected to the inner ear by large canals, for which either an acousticolateralis, electrogenerative, or electroreceptive function has been suggested (Moy-Thomas & Miles 1971; Carroll 1988; Pough et al. 1989). The tail was heterocercal, which may have made skimming along the bottom easier by counteracting the upward lift that the lateral appendages and flattened underside of the head would have generated. 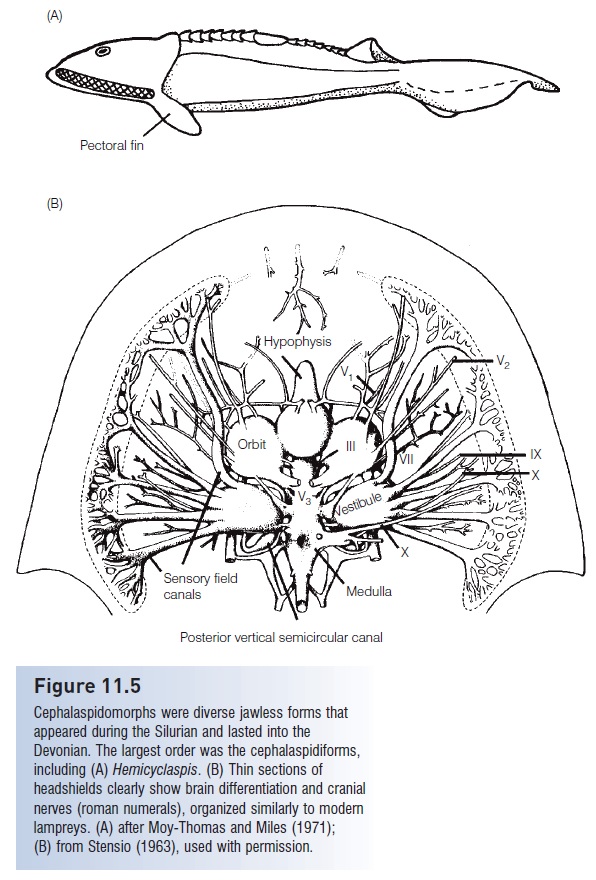 Cephalaspidomorphs were diverse jawless forms that appeared during the Silurian and lasted into the Devonian. The largest order was the cephalaspidiforms, including (A) Hemicyclaspis. (B) Thin sections of headshields clearly show brain differentiation and cranial nerves (roman numerals), organized similarly to modern lampreys. (A) after Moy-Thomas and Miles (1971); (B) from Stensio (1963), used with permission.

The internal anatomy of the cephalaspidiform head shield is remarkably well known. Swedish paleontologist Erik Stensiö and colleagues painstakingly sectioned rocks containing cephalaspidiforms and worked out the anatomical details of the braincase and cranial nerves (Fig. 11.5B).

These efforts allowed identification of such structures as the olfactory lobes, diencephalons, and myelencephalon, the relationship of the hypophyseal sac to the olfactory opening, the relative sizes of the right and left ganglia, the alternation of cranial nerves, the separation of dorsal and ventral nerve roots, the location of blood vessels, the existence of two vertical semicircular canals, and other details (Moy-Thomas & Miles 1971).

The other two cephalaspidomorph orders are the recently discovered galeaspidiforms, with 10 families restricted to China, and the pituriaspidiforms, with two species found only in Australia. In galeaspidiforms, the median nasohypophyseal opening is large and anterior to the eyes. Paired gill compartments are numerous, up to 45 in number, which is the extreme among vertebrates. Bone was acellular rather than cellular (Halstead et al. 1979; Janvier 1984; Pan Jiang 1984).

Based on the detailed anatomical studies of Stensio, subsequent workers interpreted many cephalaspidiform head structures to be homologous with modern lampreys, concluding that an ancestral–descendant relationship existed. However, more recent analyses indicate that the osteostracomorphs are the closest jawless relatives to jawed vertebrates or gnathostomes, constituting a sister group (i.e., osteostracomorphs and gnathostomes are more closely related to each other than they are to any other clade, including lampreys).