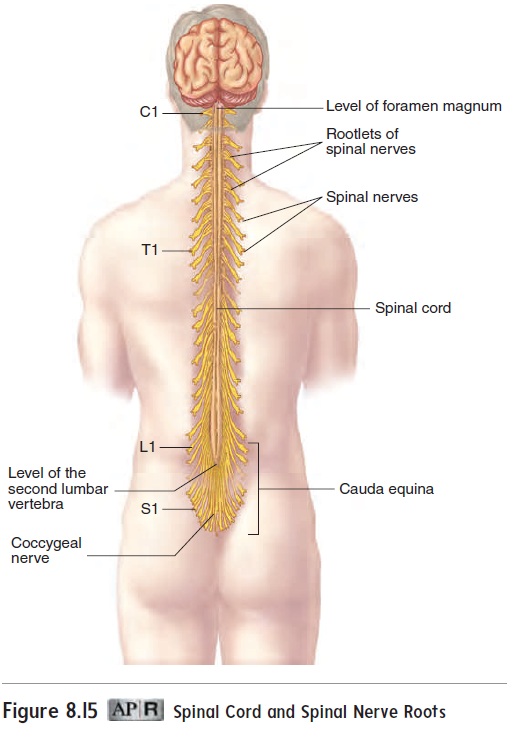 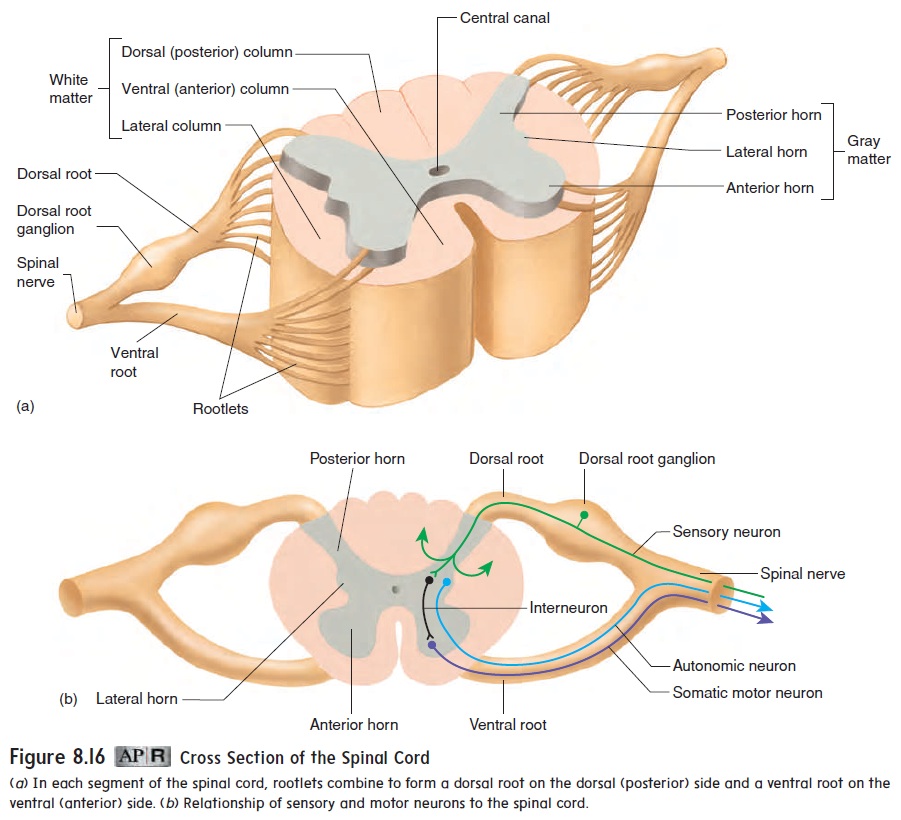 The gray matter of the spinal cord is shaped like the letter H, with posterior horns and anterior horns. Small lateral horns exist in levels of the cord associated with the autonomic nervous system. Thecentral canal is a fluid-filled space in the center of the cord.

The cell bodies of pseudo-unipolar sensory neurons are in the dorsal root ganglia (figure 8.16b). The axons of these neurons originate in the periphery of the body. They pass through spinal nerves and the dorsal roots to the posterior horn of the spinal cord gray matter. In the posterior horn, the axons either synapse with interneurons or pass into the white matter and ascend or descend in the spinal cord.

An example of a converging pathway involves a motor neuron in the spinal cord that stimulates muscle contraction (figure 8.17a). Sensory fibers from pain receptors carry action potentials to the spinal cord and synapse with interneurons, which in turn synapse with a motor neuron. Neurons in the cerebral cortex, controlling conscious movement, also synapse with the same motor neuron by way of axons in descending tracts. Both the interneurons and the neurons in the cerebral cortex have axons that converge on the motor neuron, which can therefore be stimulated either through the reflex arc or by conscious thought.

An example of a diverging pathway involves sensory neurons within the spinal cord (figure 8.17b). The axon of a sensory neu- ron carrying action potentials from pain receptors branches within the spinal cord. One branch produces a reflex response by synaps-ing with an interneuron. The interneuron, in turn, synapses with a motor neuron, which stimulates a muscle to withdraw the injured region of the body from the source of the pain. The other branch synapses with an ascending neuron that carries action potentials through a nerve tract to the brain, where the stimulation is inter-preted as pain.

The simplest reflex is the stretch reflex, in which muscles contract in response to a stretching force applied to them. The knee-jerkreflex, orpatellar reflex(figure 8.18), is a classic example of thestretch reflex. When the patellar ligament is tapped, the quadriceps femoris muscle tendon and the muscles themselves are stretched. Sensory receptors within these muscles are also stretched, and the stretch reflex is activated. Consequently, contraction of the muscles extends the leg, producing the characteristic knee-jerk response. 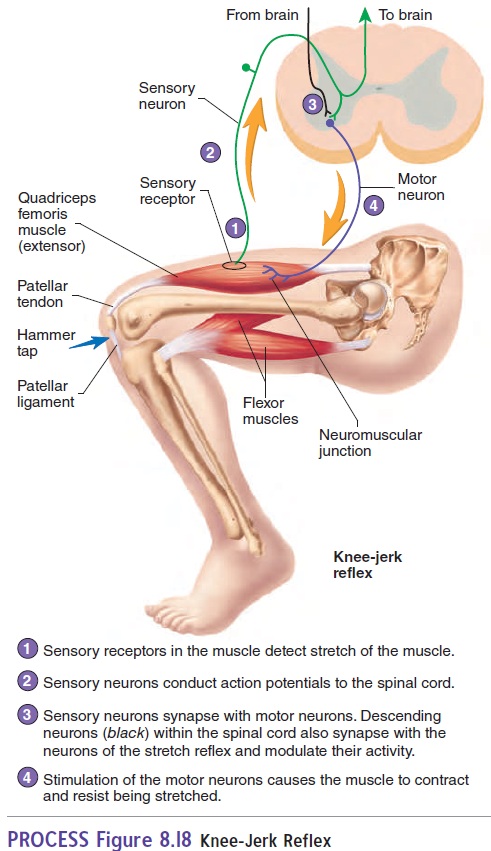 Clinicians use the knee-jerk reflex to determine if the higher CNS centers that normally influence this reflex are functional. Descending neurons within the spinal cord synapse with the neu-rons of the stretch reflex and modulate their activity. This activity is important in maintaining posture and in coordinating muscular activity. Following a severe spinal cord injury, all spinal reflexes are lost below the level of injury. By about 2 weeks after the injury, the knee-jerk reflex returns, but it is often exaggerated. When the stretch reflex is absent or greatly exaggerated, it indicates that the neurons within the brain or spinal cord that modify this reflex have been damaged.

The function of the withdrawal reflex, or flexor reflex, is to remove a limb or another body part from a painful stimulus. The sensory receptors are pain receptors . Following painful stimuli, sensory neurons conduct action potentials through the dorsal root to the spinal cord, where the sensory neurons synapse with interneurons, which in turn synapse with motor neurons (figure 8.19). These neurons stimulate muscles, usually flexor mus-cles, that remove the limb from the source of the painful stimulus. 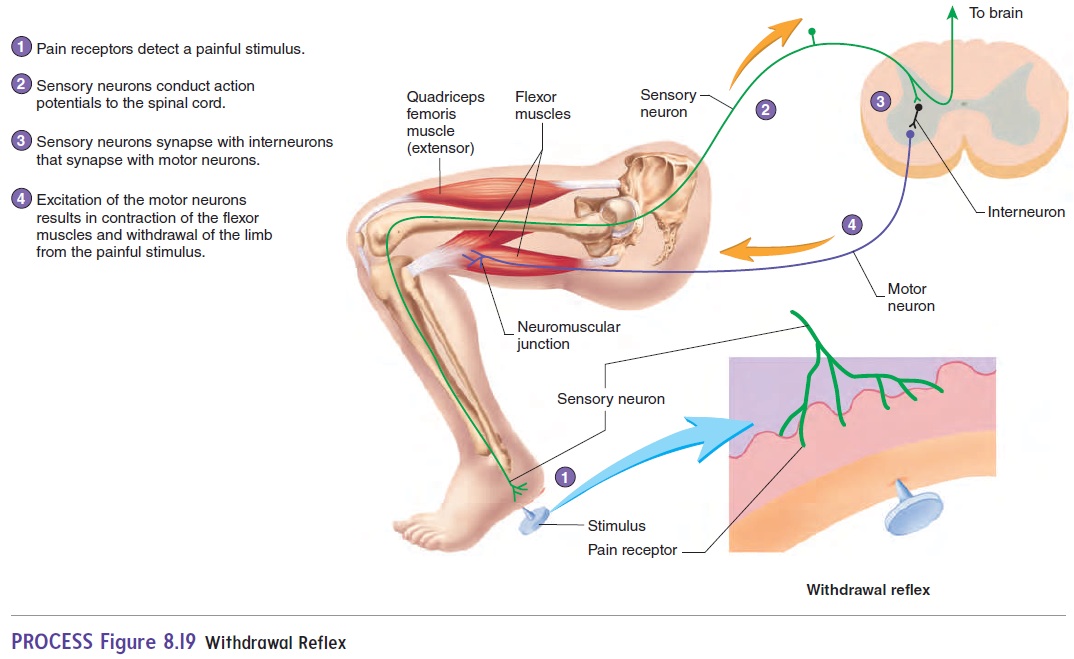