Different levels of consciousness can be revealed by different patterns of electrical activity in the brain.

Different levels of consciousness can be revealed by different patterns of electrical activity in the brain. Electrodes placed on a person’s scalp and attached to a recording device can record the brain’s electrical activity, producing an electroencephalogram (ē-lek′ trō-en-sef′ ă-lō-gram) (EEG) (figure 8.32). These electrodes are not positioned so that they can detect individual action poten-tials, but they can detect the simultaneous action potentials in large numbers of neurons. Most of the time, EEG patterns are irregular, with no particular pattern, because the brain’s electrical activity is normally not synchronous. At other times, however, EEG patterns can be detected as wavelike patterns known as brain waves. Their intensity and frequency differ, based on the state of brain activity. The different levels of consciousness in an awake and a sleeping person are marked by different types of brain waves. Alpha waves are observed in a normal person who is awake but in a quiet, rest-ing state with the eyes closed. Beta waves have a higher frequency than alpha waves and occur during intense mental activity. During the beginning of sleep, a rapid transition takes place from a beta rhythm to an alpha rhythm. As sleep deepens, progressively more delta waves occur. Delta waves occur during deep sleep, in infants, and in patients with severe brain disorders. A fourth type of brain waves, theta waves, are usually observed in children, but they can also occur in adults who are experiencing frustration or who have certain brain disorders. Neurologists use these patterns to diagnose and determine the treatment for the disorders. 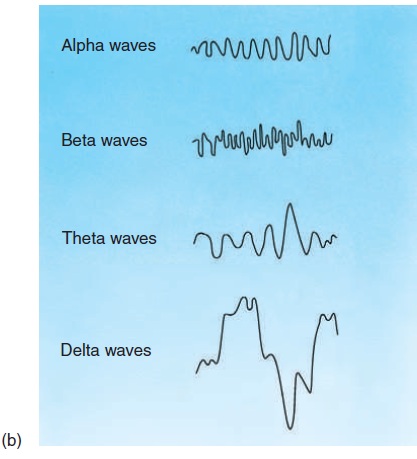 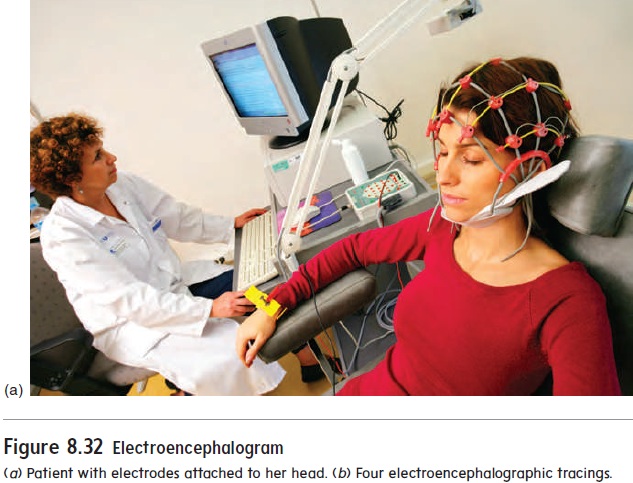