A. Describe a resting membrane potential, and explain how an action potential is generated and propagated. Compare the roles of leak and gated ion channels. B. Describe the structure and function of a synapse. C. List the parts of a reflex arc, and describe its function. D. Describe a converging and a diverging circuit and the role of summation in neural pathways.

A.    Describe a resting membrane potential, and explain how an action potential is generated and propagated. Compare the roles of leak and gated ion channels.

B.     Describe the structure and function of a synapse.

C.    List the parts of a reflex arc, and describe its function.

D.    Describe a converging and a diverging circuit and the role of summation in neural pathways.

All cells exhibit electrical properties. The inside of most cell mem-branes is negatively charged compared to the outside of the cell mem-brane, which is positively charged. This uneven distribution of charge means the cell membrane is polarized. In an unstimulated (or resting) cell, the uneven charge distribution is called the resting membrane potential. The outside of the cell membrane can be thought of as the positive pole of a battery and the inside as the negative pole. Thus, a small voltage difference, called a potential, can be measured across the resting cell membrane. 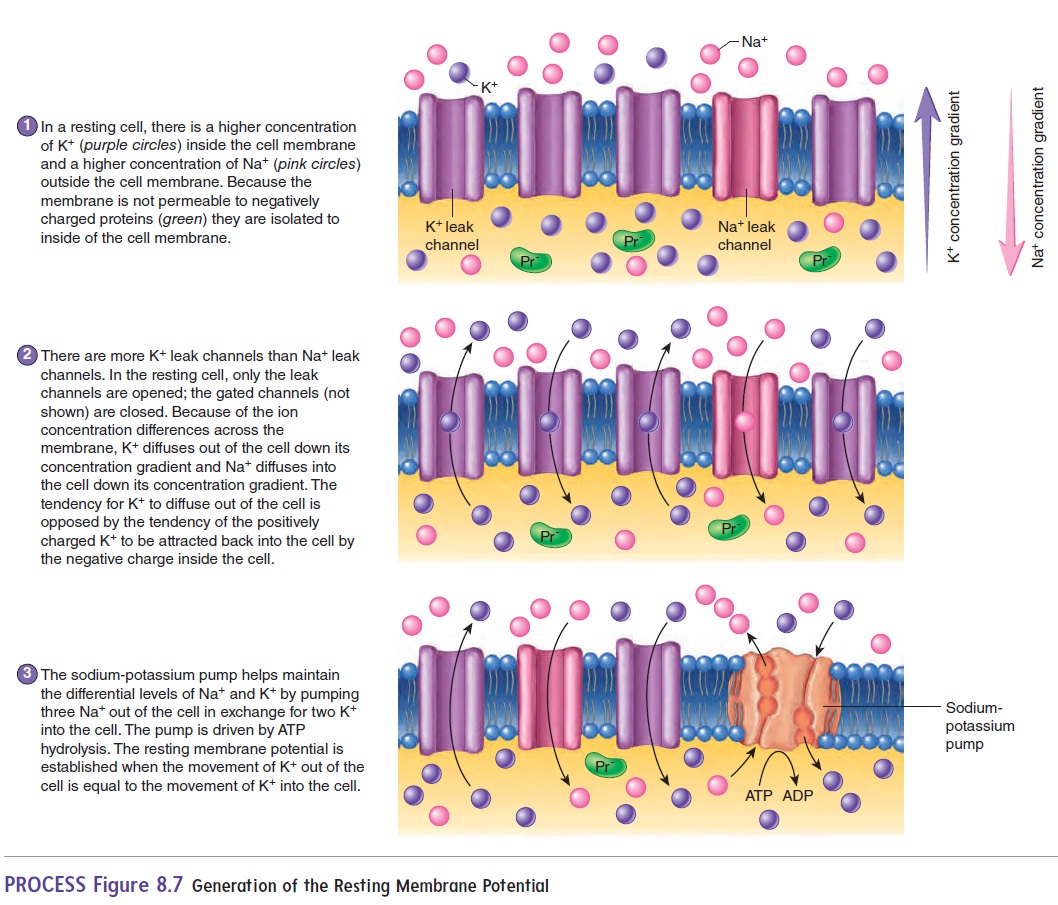 The difference in membrane permeability is due to the differ-ence in the number of open ion channels. Recall that ions cannot move freely across the cell membrane; instead, ions must flow through ion channels, which are proteins embed-ded in the cell membrane. Ions flow through channels due to the differences in their concentration across the membrane. There are two basic types of ion channels: leak channels and gated channels (see figure 3.5). Leak channels are always open. Thus, as the name suggests, ions can “leak” across the membrane down their concentration gradient. When a cell is at rest, the membrane potential is established by diffusion of ions through leak channels. 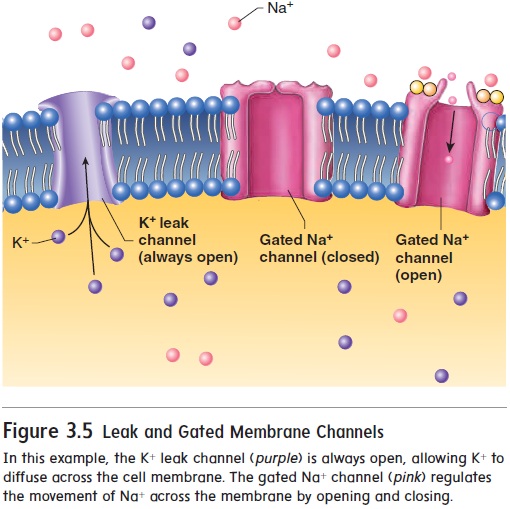 To compensate for the constant leakage of ions across the membrane, the sodium-potassium pump (Na+–K+ pump) is required to maintain the greater concentration of Na+ outside the cell mem-brane and K+inside. The pump actively transports K+ into the cell and Na+ out of the cell (figure 8.7, step 3). The importance of this pump is indicated by the astounding amount of energy it consumes. It is estimated that the sodium-potassium pump consumes 25% of all the ATP in a typical cell and 70% of the ATP in a neuron.

Muscle and nerve cells are excitable cells, meaning that the resting membrane potential changes in response to stimuli that activate gated ion channels. The opening and closing of gated channels can change the permeability characteristics of the cell membrane and hence change the membrane potential. 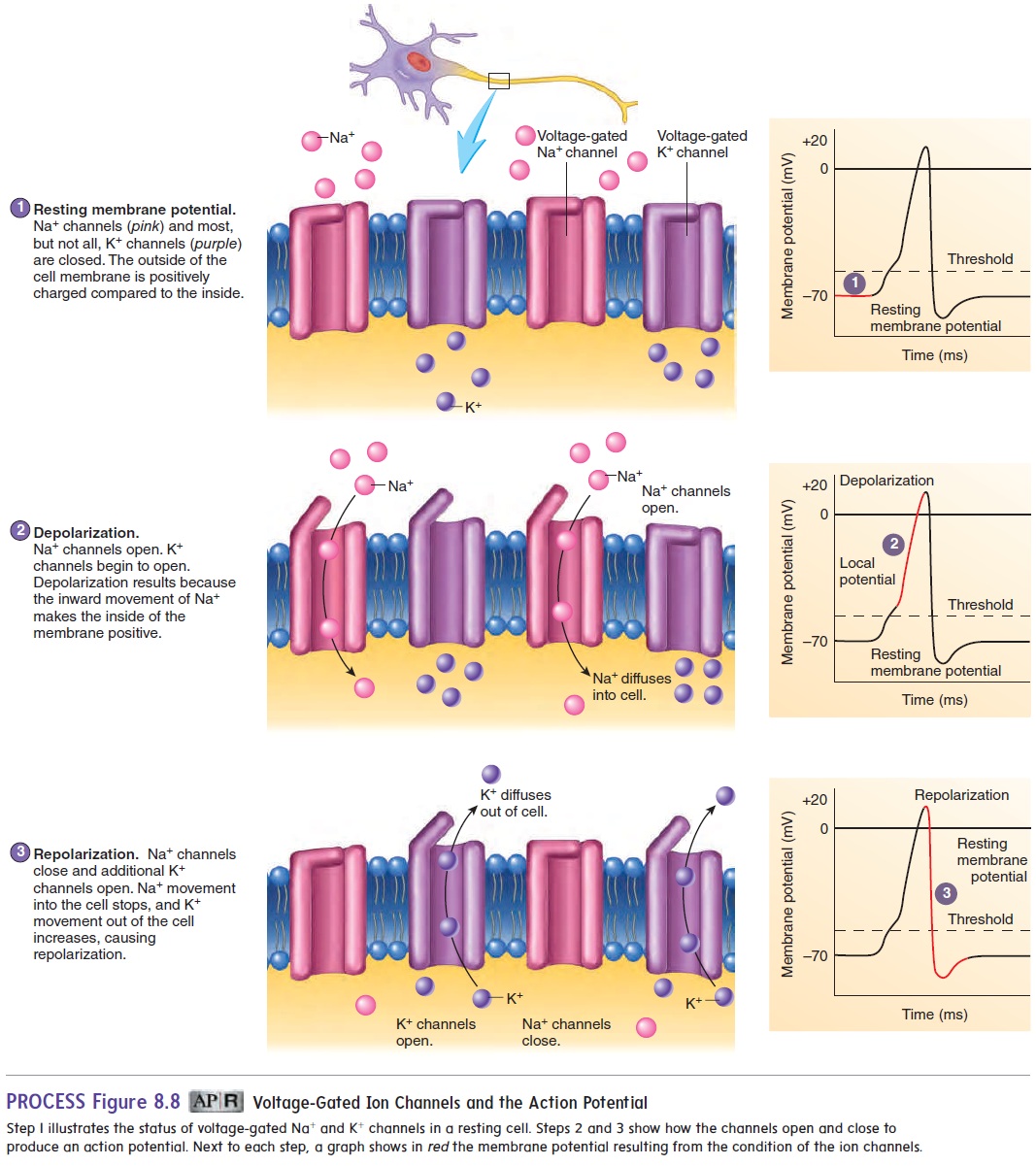 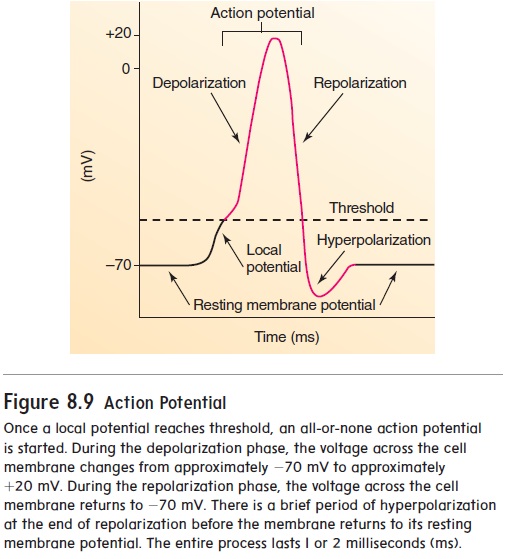 In summary, the resting membrane potential is set by the activity of the leak channels. On stimulation, chemically gated channels are opened and initiate localpotentials. If sufficiently strong, the local potentials activate voltage-gated channels to initi-ate an action potential. 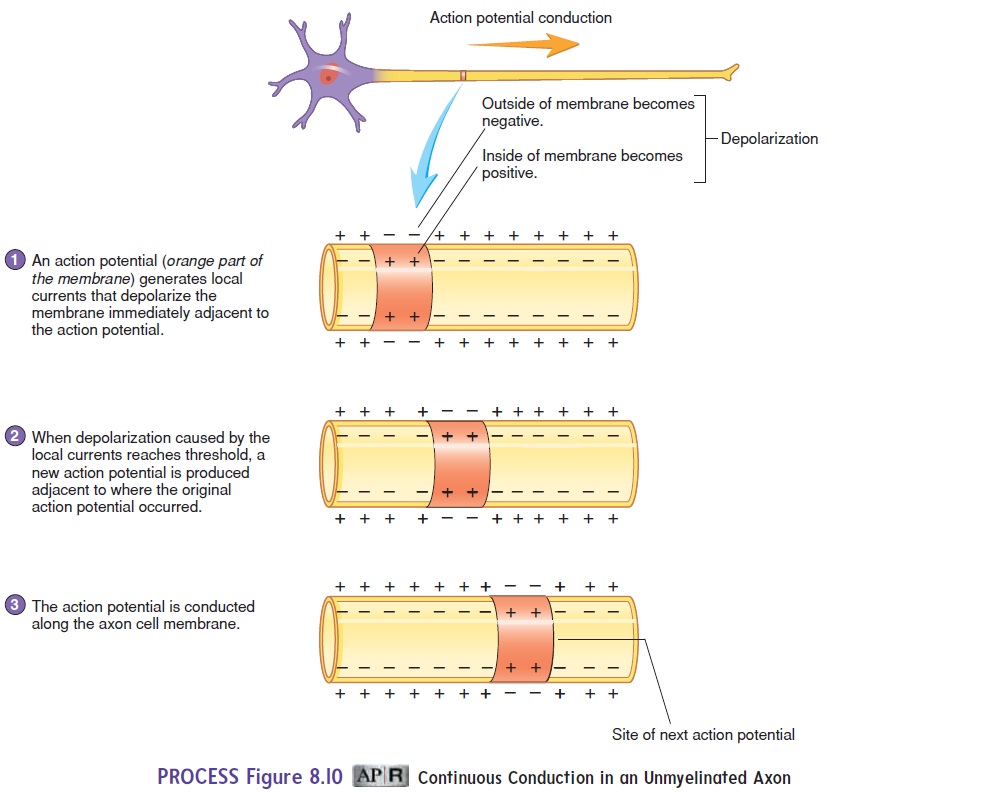 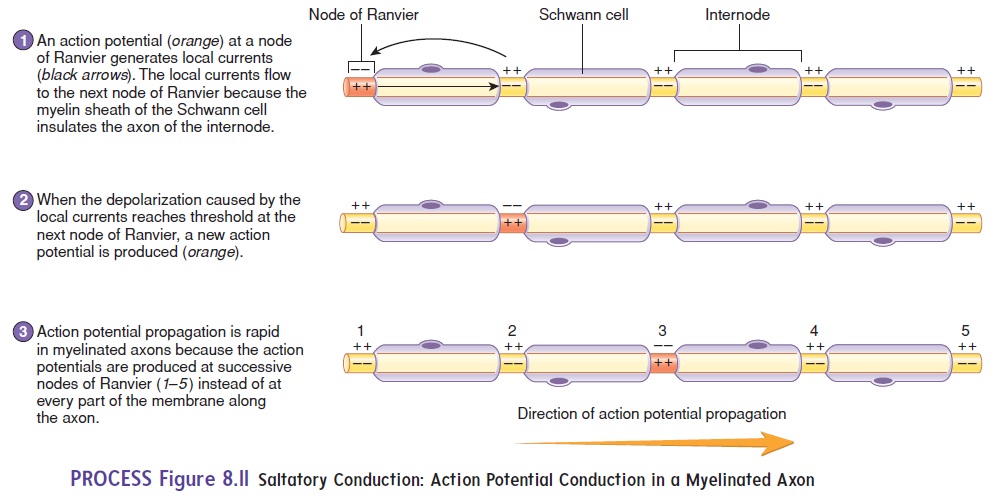 Saltatory conduction greatly increases the conduction velocity because the nodes of Ranvier make it unnecessary for action potentials to travel along the entire cell membrane. Action potential conduc-tion in a myelinated fiber is like a child skipping across the floor, whereas in an unmyelinated axon it is like a child walking heel to toe across the floor.

Medium-diameter, lightly myelinated axons, characteristic of autonomic neurons, conduct action potentials at the rate of about 3–15 meters per second (m/s), whereas large-diameter, heavily myelinated axons conduct action potentials at the rate of 15–120 m/s. These rapidly conducted action potentials, carried by sensory and motor neurons, allow for rapid responses to changes in the external environment. In addition, several hundred times fewer ions cross the cell membrane during conduction in myelinated cells than in unmyelinated cells. Much less energy is therefore required for the sodium-potassium pump to maintain the ion distribution.

Of the many neurotransmitters or suspected neurotransmitter substances, the best known are acetylcholine (ACh) (as′ e-til-kō′ lēn) and norepinephrine (nōr′ ep-i-nef′ rin). Other neurotrans-mitters include serotonin (sēr- ō-tō′ nin), dopamine (dō′ pă-mēn), γ (gamma)-aminobutyric (gam′ă ă-mē′nō-bū-tēr′ik) acid (GABA),glycine, and endorphins (en′ dōr-finz; endogenous morphine) (table 8.2). Neurotransmitter substances are rapidly broken down by enzymes within the synaptic cleft or are transported back into the presynaptic terminal. Consequently, they are removed from the synaptic cleft, so their effects on the postsynaptic membrane are very short-term. In synapses where acetylcholine is the neurotrans-mitter, such as in the neuromuscular junction , an enzyme called acetylcholinesterase (as′ e-til-kō-lin-es′ - ter-ās) breaks down the acetylcholine. The breakdown products are then returned to the presynaptic terminal for reuse. Norepinephrine is 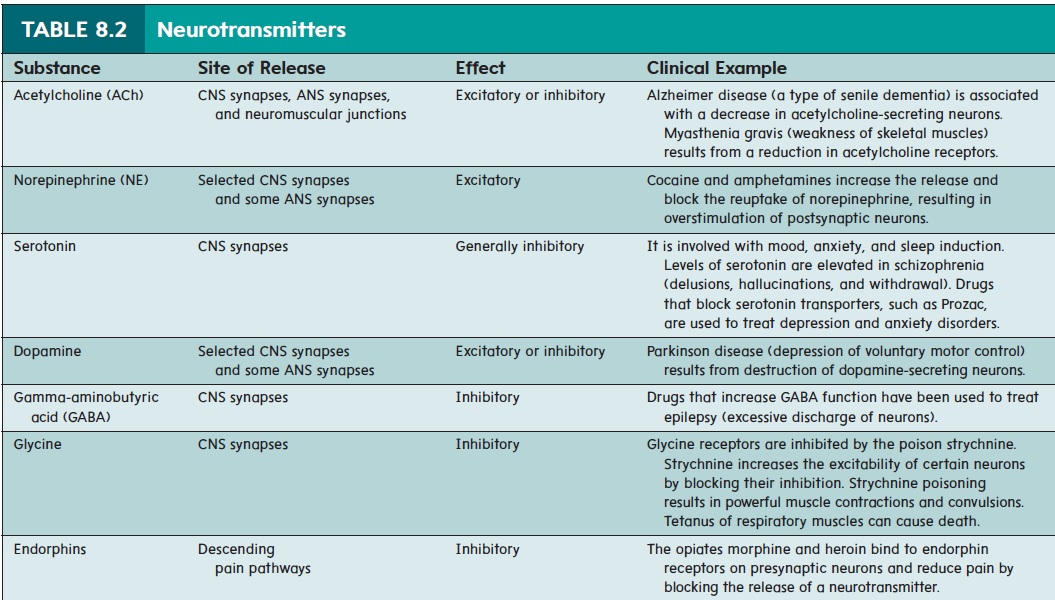 either actively transported back into the presynaptic terminal or broken down by enzymes. The release and breakdown or removal of neurotransmitters occurs so rapidly that a postsynaptic cell can be stimulated many times a second. Drugs can modulate the action of neurotransmitters at the synapse. Cocaine and amphetamines increase the release and block the reuptake of norepinephrine, resulting in overstimulation of postsynaptic neurons and deleteri-ous effects on the body. Drugs that block serotonin reuptake are particularly effective at treating depression and behavioral disorders.

A reflex is an involuntary reaction in response to a stimulus applied to the periphery and transmitted to the CNS. Reflexes allow a person to react to stimuli more quickly than is possible if conscious thought is involved. A reflex arc is the neuronal pathway by which a reflex occurs (figure 8.13). The reflex arc is the basic functional unit of the nervous system because it is the smallest, simplest pathway capable of receiving a stimulus and yielding a response. A reflex arc generally has five basic components:(1) a sensory receptor; (2) a sensory neuron; (3) in some reflexes, interneurons, which are neurons located between and communi-cating with two other neurons; (4) a motor neuron; and (5) an effector organ (muscles or glands). The simplest reflex arcs donot involve interneurons. Most reflexes occur in the spinal cord or brainstem rather than in the higher brain centers.

One example of a reflex occurs when a person’s finger touches a hot stove. The heat stimulates pain receptors in the skin, and action potentials are produced. Sensory neurons conduct the action potentials to the spinal cord, where they synapse with interneurons. The interneurons, in turn, synapse with motor neurons in the spi-nal cord that conduct action potentials along their axons to flexor muscles in the upper limb. These muscles contract and pull the finger away from the stove. No conscious thought is required for this reflex, and withdrawal of the finger from the stimulus begins before the person is consciously aware of any pain.

Neurons are organized within the CNS to form pathways ranging from relatively simple to extremely complex. The two simplest pathways are converging and diverging pathways. In a convergingpathway,two or more neurons synapse with (converge on) the sameneuron (figure 8.14a). This allows information transmitted in more than one neuronal pathway to converge into a single pathway. In a diverging pathway, the axon from one neuron divides (diverges) and synapses with more than one other neuron (figure 8.14b). This allows information transmitted in one neuronal pathway to diverge into two or more pathways. 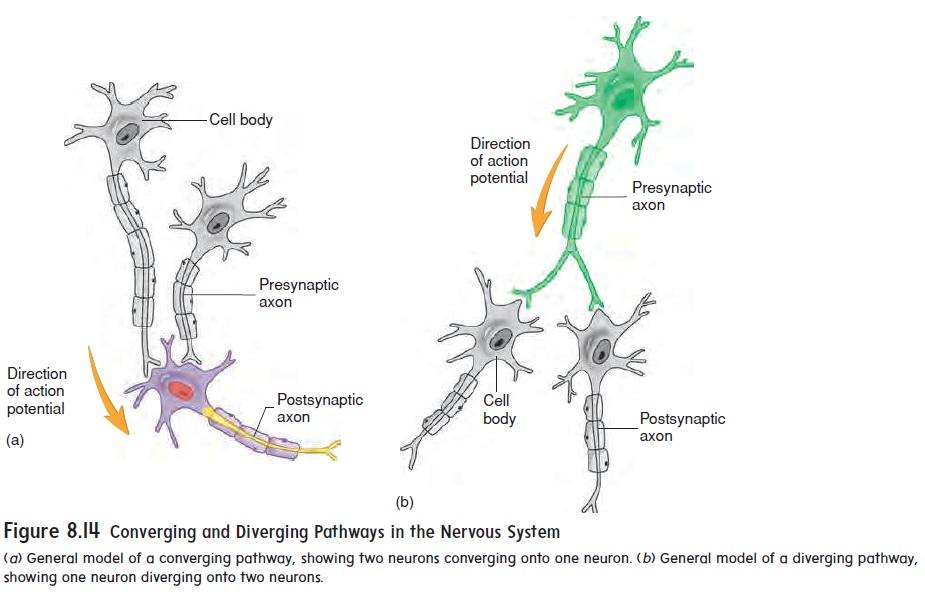