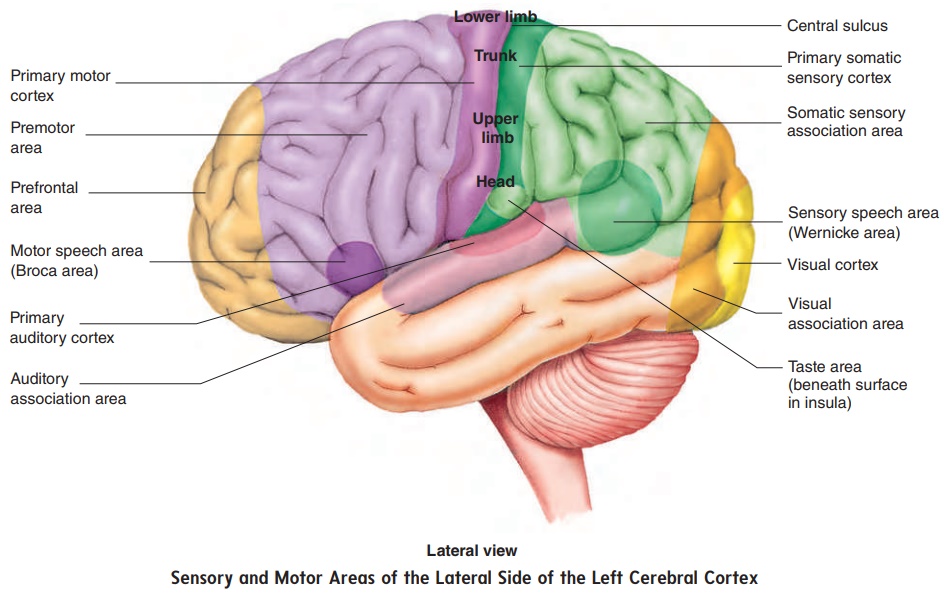 A. Describe the motor area of the cerebral cortex, and discuss how it interacts with other parts of the frontal lobe. B. Distinguish between upper and lower motor neurons and between direct and indirect tracts. C. Discuss how the basal nuclei and cerebellum regulate motor functions.

The motor system of the brain and spinal cord is responsible for maintaining the body’s posture and balance, as well as moving the trunk, head, limbs, tongue, and eyes and communicating through facial expressions and speech. Reflexes mediated through the spinal cord and brainstem are responsible for some body movements. These are called involuntary movements because they occur without conscious thought. Voluntary movements, on the other hand, are consciously activated to achieve a specific goal, such as walking or typing. Although consciously activated, the details of most voluntary movements occur automatically. For example, once you start walking, you don’t have to think about the moment-to-moment control of every muscle because neural circuits in the reticular formation and spinal cord automatically control your limbs. Once learned, complex tasks, such as typing, can be performed relatively automatically.

Motor Areas Of The Cerebral Cortex

The primary motor cortex is located in the posterior portion of the frontal lobe, directly anterior to the central sulcus (figure 8.27). Action potentials initiated in this region control voluntary move-ments of skeletal muscles. Upper motor neuron axons project from specific regions of this cortex to specific parts of the body so that a topographic map of the body exists in the primary motor cortex, with the head inferior, analogous to the topographic map of the primary somatic sensory cortex (figure 8.27). The premotor area of the frontal lobe is where motor functions are organized before they are actually initiated in the primary motor cortex. For example, if a person decides to take a step, the neurons of the premotor area are first stimulated, and the determination is made there as to which muscles must contract, in what order, and to what degree. Action potentials are then passed to the upper motor neurons of the pri-mary motor cortex, which initiate each planned movement. 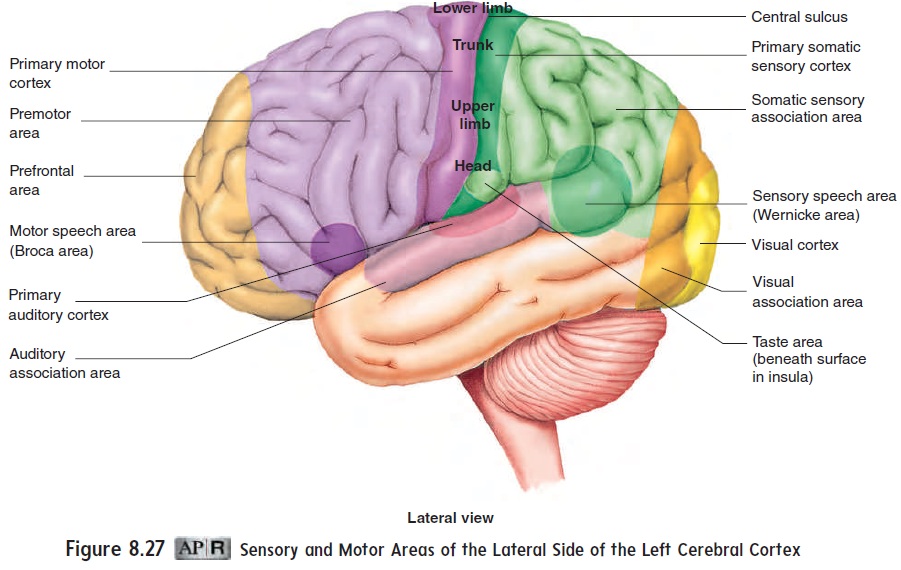 The motivation and foresight to plan and initiate movements occur in the anterior portion of the frontal lobes, called the pre-frontal area. This region of association cortex is well developedonly in primates, especially humans. It is involved in motivation and regulation of emotional behavior and mood. The large size of this area in humans may account for our emotional complexity and our relatively well-developed capacity to think ahead and feel motivated. 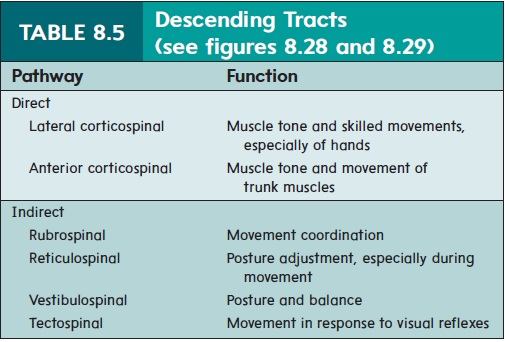 The descending tracts control different types of movements (table 8.5). Tracts in the lateral columns (see figure 8.16; figure 8.28) are most important in controlling goal-directed limb movements, such as reaching and manipulating. The lateral corticospinaltracts are especially important in controlling the speed and precisionof skilled movements of the hands. Tracts in the ventral columns, such as the reticulospinal tract, are most important for maintaining posture, balance, and limb position through their control of neck, trunk, and proximal limb muscles. 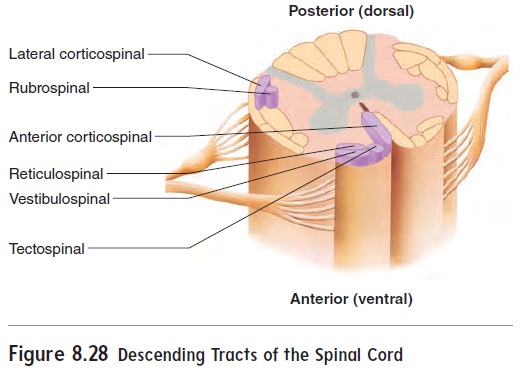 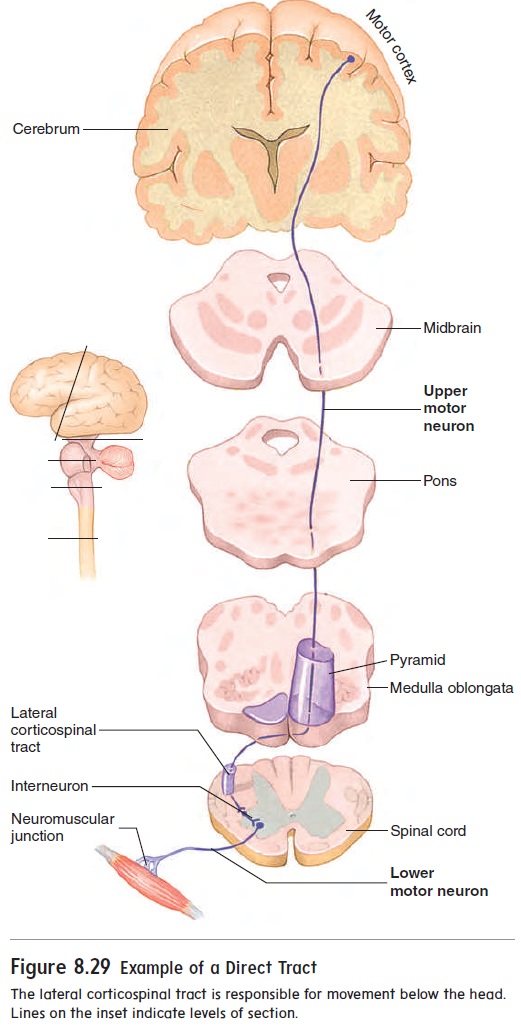 The basal nuclei are a group of functionally related nuclei (figure 8.30). Two primary nuclei are the corpus striatum (kōr′ -pŭs strı̄-ā′ tŭm), located deep within the cerebrum, and the substantianigra, a group of darkly pigmented cells in the midbrain.

The basal nuclei are important in planning, organizing, and coordinating motor movements and posture. Complex neural cir-cuits link the basal nuclei with each other, with the thalamus, and with the cerebral cortex. These connections form several feedback loops, some of which are stimulatory and others inhibitory. The stimulatory circuits facilitate muscle activity, especially at the 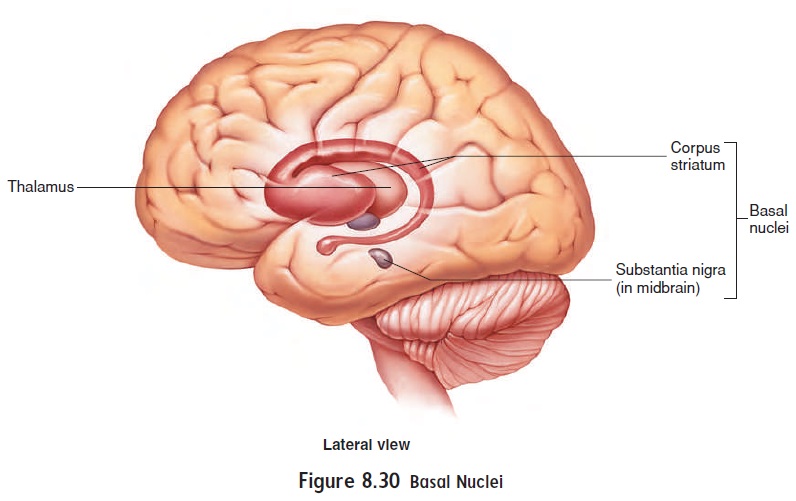 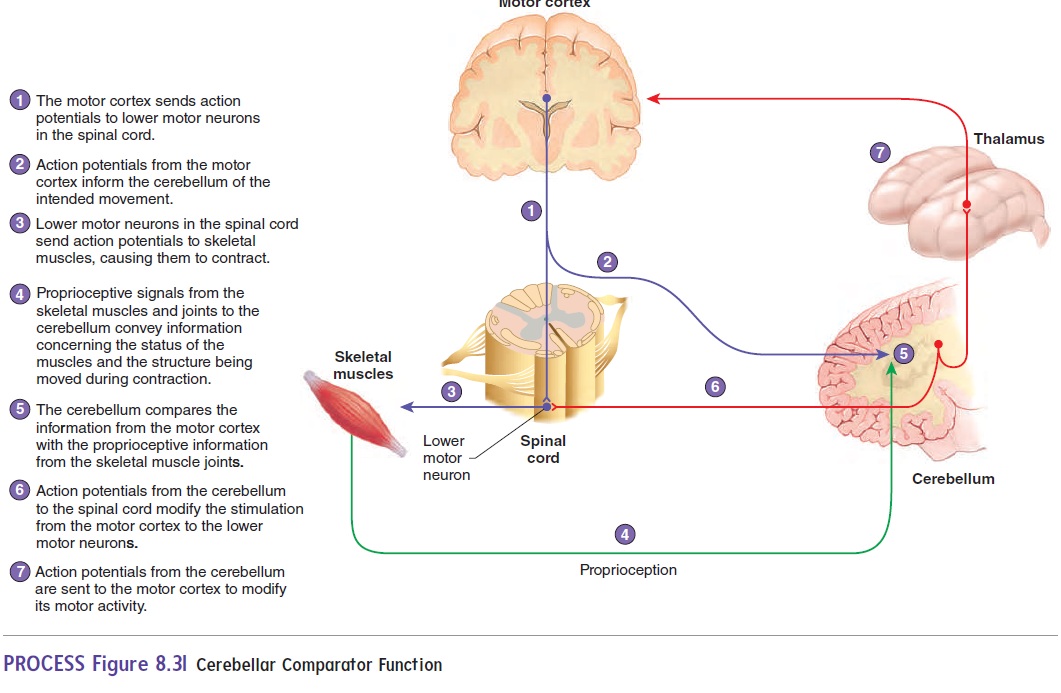 Another function of the cerebellum involves participating with the cerebrum in learning motor skills, such as playing the piano. Once the cerebrum and cerebellum “learn” these skills, the special-ized movements can be accomplished smoothly and automatically.