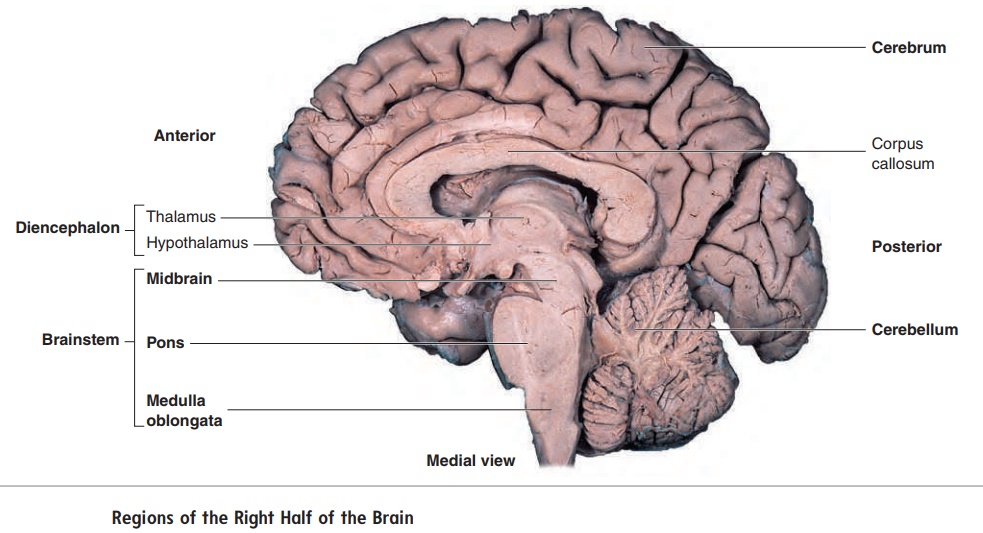 The major regions of the brain are the brainstem, the cerebellum, the diencephalon, and the cerebrum (figure 8.21). 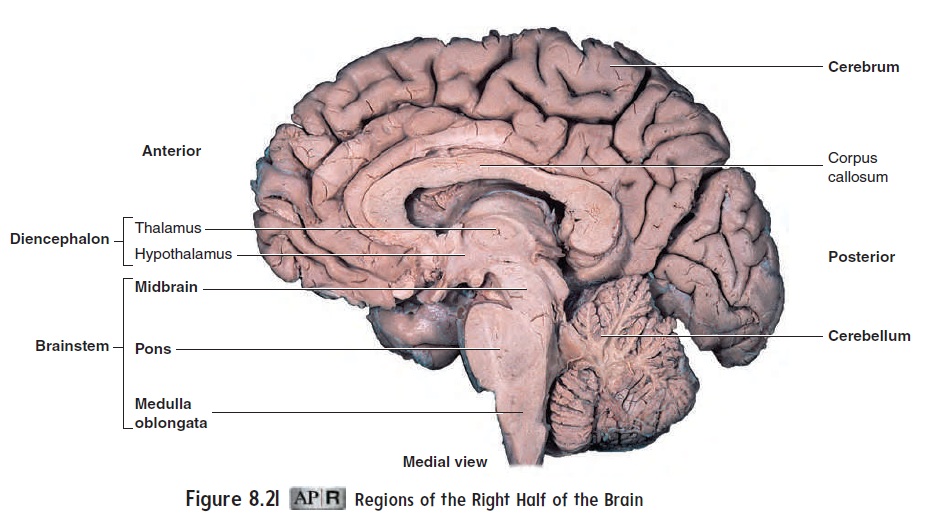 The brainstem connects the spinal cord to the remainder of the brain (figure 8.22). It consists of the medulla oblongata, the pons, and the midbrain. The brainstem contains several nuclei involved in vital body functions, such as the control of heart rate, blood pressure, and breathing. Damage to small areas of the brainstem can cause death, whereas damage to relatively large areas of the cerebrum or cerebellum often do not. Nuclei for all but the first two cranial nerves are also located in the brainstem. 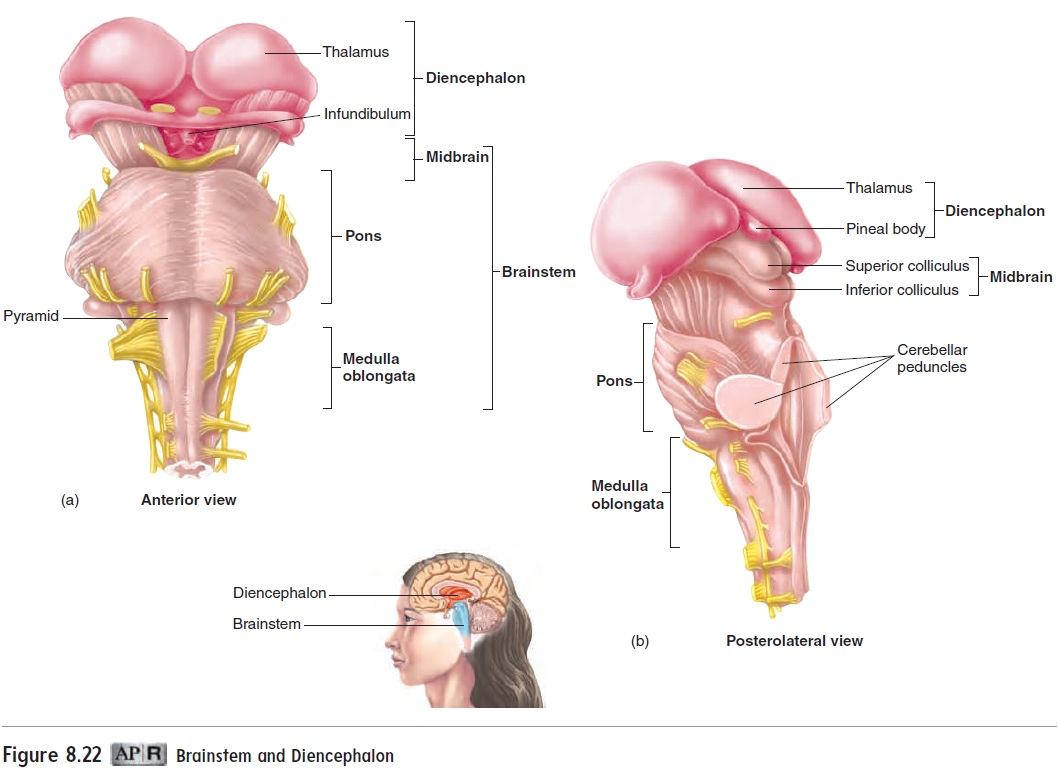 The medulla oblongata (ob′ long-ğa ′ t̆a ) is the most inferior portion of the brainstem (figure 8.22) and is continuous with the spinal cord. It extends from the level of the foramen magnum to the pons. In addition to ascending and descending nerve tracts, the medulla oblongata contains discrete nuclei with specific functions, such as regulation of heart rate and blood vessel diameter, breathing, swal-lowing, vomiting, coughing, sneezing, balance, and coordination.

On the anterior surface, two prominent enlargements called pyramids extend the length of the medulla oblongata (figure 8.22a).The pyramids consist of descending nerve tracts, which transmit action potentials from the brain to motor neurons of the spinal cord and are involved in the conscious control of skeletal muscles.

Immediately superior to the medulla oblongata is the pons (ponz; bridge). It contains ascending and descending nerve tracts, as well as several nuclei. Some of the nuclei in the pons relay information between the cerebrum and the cerebellum. Not only is the pons a functional bridge between the cerebrum and cerebellum, but on the anterior surface it resembles an arched footbridge (figure 8.22a). Several nuclei of the medulla oblongata, described earlier, extend into the lower part of the pons, so functions such as breathing, swallowing, and balance are controlled in the lower pons, as well as in the medulla oblongata. Other nuclei in the pons control func-tions such as chewing and salivation.

The midbrain, just superior to the pons, is the smallest region of the brainstem (figure 8.22b). The dorsal part of the midbrain consists of four mounds called the colliculi (ko-lik′ ̄u -l ; sing. colliculus, hill). The two inferior colliculi are major relay centers for the auditory nerve pathways in the CNS. The two superior colliculi are involved in visual reflexes and receive touch and audi-tory input. Turning the head toward a tap on the shoulder, a sudden loud noise, or a bright flash of light is a reflex controlled in the superior colliculi. The midbrain contains nuclei involved in coor-dinating eye movements and controlling pupil diameter and lens shape. The midbrain also contains a black nuclear mass, called the substantia nigra (s̆ub-stan′sh̄e-̆an′gr̆a; black substance), whichis part of the basal nuclei (see “Basal Nuclei”) and is involved in regulating general body movements. The rest of the midbrain consists largely of ascending tracts from the spinal cord to the cerebrum and descending tracts from the cerebrum to the spinal cord or cerebellum.

The cerebellum (ser-e-bel′ ŭm; little brain), shown in figure 8.21, is attached to the brainstem by several large connections called cerebellar peduncles (pe-dŭng′klz;pes,foot). These connectionsprovide routes of communication between the cerebellum and other parts of the CNS. The structure and function of the cerebellum are discussed in “Motor Functions” later.

The diencephalon (dı̄′ en-sef′ ă-lon) is the part of the brain between the brainstem and the cerebrum (figure 8.23). Its main components are the thalamus, the epithalamus, and the hypothalamus. 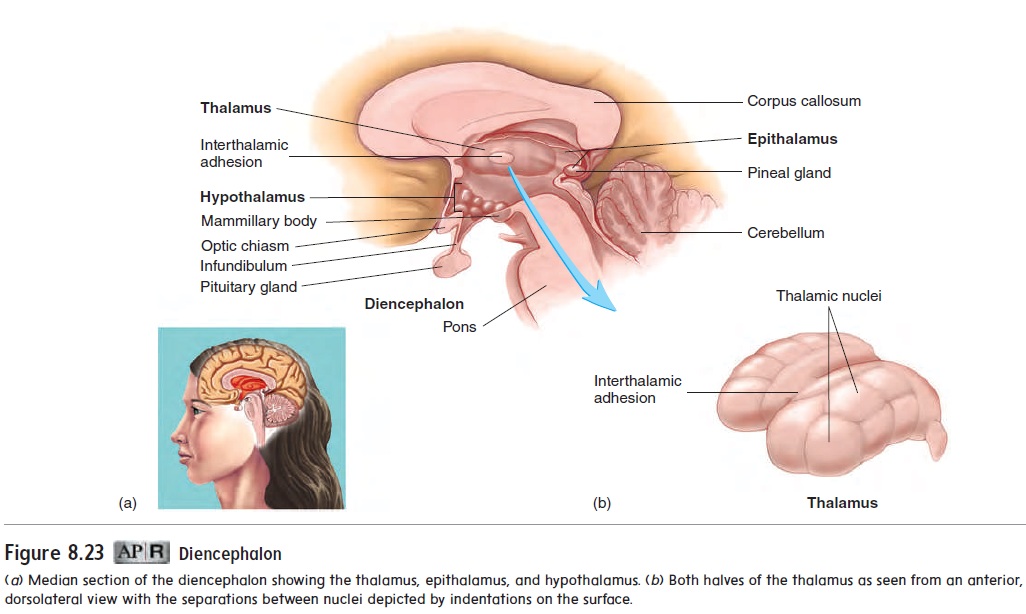 The thalamus (thal′ a-mŭs) is by far the largest part of the dien-cephalon. It consists of a cluster of nuclei and is shaped somewhat like a yo-yo, with two large, lateral parts connected in the center by a smallinterthalamic adhesion (figure 8.23). Most sensory input that ascends through the spinal cord and brainstem projects to the thalamus, where ascending neurons synapse with thalamic neurons. Thalamic neurons, in turn, send their axons to the cere-bral cortex. The thalamus also influences mood and registers an unlocalized, uncomfortable perception of pain.

The epithalamus (ep′ i-thal′ ă-mŭs; epi, upon) is a small area superior and posterior to the thalamus (figure 8.23). It consists of a few small nuclei, which are involved in the emotional and visceral response to odors, and the pineal gland. The pineal (pin′ ē-ăl; pinecone-shaped) gland is an endocrine gland that may influence the onset of puberty and may play a role in controlling some long-term cycles that are influenced by the light-dark cycle. In animals, the pineal gland is known to influence annual behaviors, such as migration in birds, as well as changes in the color and density of fur in some mammals .

The hypothalamus is the most inferior part of the diencephalon; it contains several small nuclei that are very important in main-taining homeostasis. The hypothalamus plays a central role in the control of body temperature, hunger, and thirst. Sensations such as sexual pleasure, rage, fear, and relaxation after a meal are related to hypothalamic functions. Emotional responses that seem inap-propriate to the circumstances, such as “nervous perspiration” in response to stress or hunger as a result of depression, also involve the hypothalamus. A funnel-shaped stalk, the infundibulum (in-fŭn-dib′ ū-lŭm; a funnel), extends from the floor of the hypo-thalamus to the pituitary gland. The hypothalamus plays a major role in controlling the secretion of hormones from the pituitary gland . The mammillary (mam′ i-lār-ē;mamilla, nipple) bodies form externally visible swellings on the poste-rior portion of the hypothalamus and are involved in emotional responses to odors and in memory.

The cerebrum (ser′ ĕ-brŭm, sĕ-rē′ brŭm; brain) is the largest part of the brain (figure 8.24). It is divided into left and right hemispheres by a longitudinal fissure. The most conspicuous features on the surface of each hemisphere are numerous folds called gyri (jı̄′ r ı̄; sing. gyrus, gyros, circle), which greatly increase the surface area of the cortex, and intervening grooves called sulci (sŭl′ sı̄; sing. sulcus, a furrow or ditch). 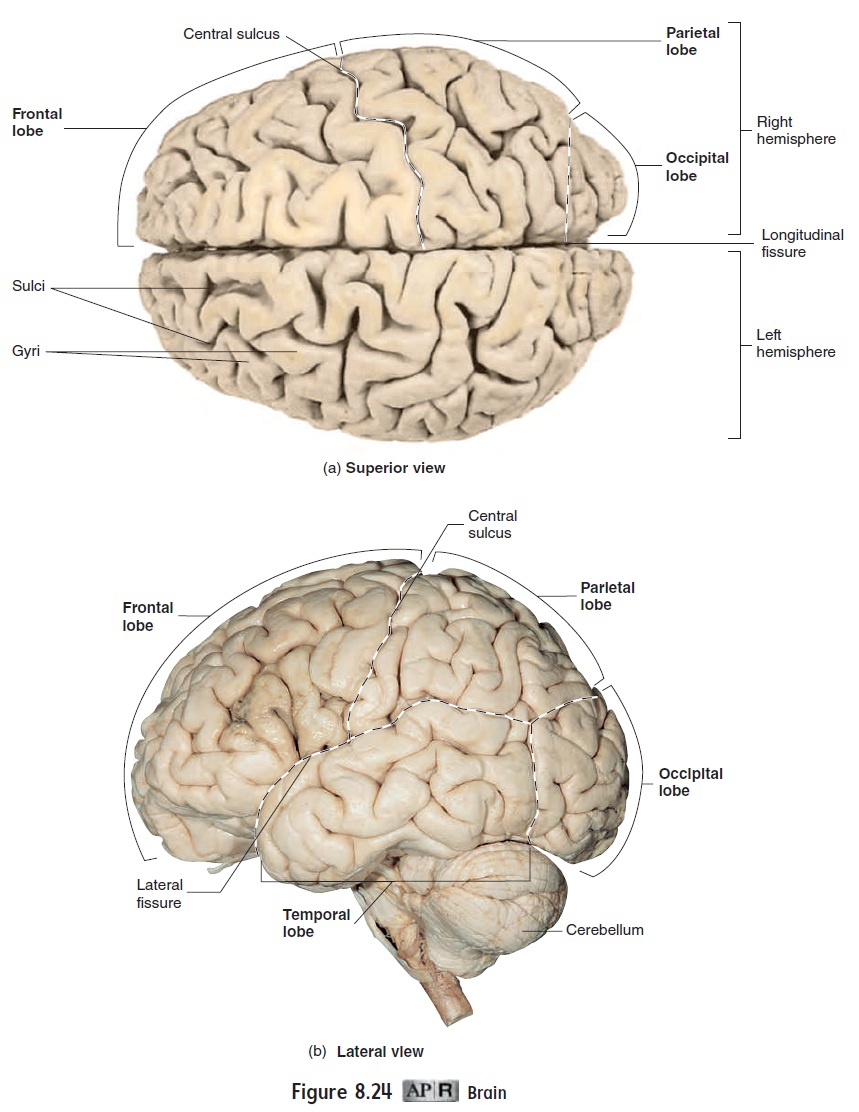 Each cerebral hemisphere is divided into lobes, which are named for the skull bones overlying them. The frontal lobe is important in the control of voluntary motor functions, motivation, aggression, mood, and olfactory (smell) reception. The parietallobe is the principal center for receiving and consciously perceivingmost sensory information, such as touch, pain, temperature, and balance. The frontal and parietal lobes are separated by the cen-tral sulcus. The occipital lobe functions in receiving and perceiv-ing visual input and is not distinctly separate from the other lobes. The temporal lobe (figure 8.24b) is involved in olfactory (smell) and auditory (hearing) sensations and plays an important role in memory. Its anterior and inferior portions, called the “psychic cortex,” are associated with functions such as abstract thought and judgment. Most of the temporal lobe is separated from the rest of the cerebrum by the lateral fissure, and deep within the fissure is the insula (in′ soo-lă), often referred to as the fifth lobe.