Cells of the Nervous System 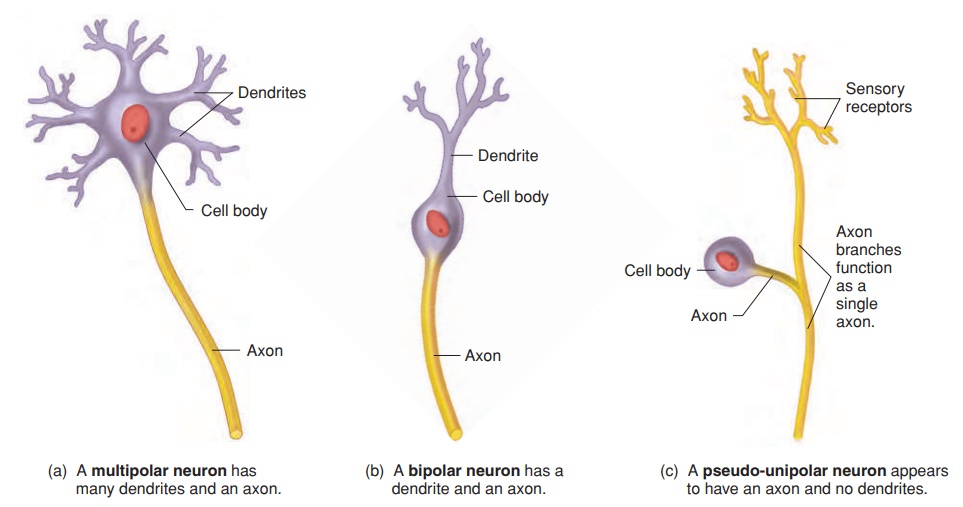 CELLS OF THE NERVOUS SYSTEM

The two types of cells that make up the nervous system are neurons and glial cells.

Neurons (noor′onz; nerve), ornerve cells(figure 8.3), receive stim-uli, conduct action potentials, and transmit signals to other neurons or effector organs. There are three parts to a neuron: a cell body and two types of processes, called dendrites and axons.

Each neuron cell body contains a single nucleus. As with any other cell, the nucleus of the neuron is the source of information for gene expression. Extensive rough endoplasmic reticulum (rough ER), a Golgi apparatus, and mitochondria surround the nucleus. Large numbers of neurofilaments (intermediate filaments) and microtubules organize the cytoplasm into distinct areas.

Each neuron has an axon, a single long cell process extending from the neuron cell body. The area where the axon leaves the neu-ron cell body is called the axon hillock. Each axon has a uniform diameter and may vary in length from a few millimeters to more than a meter. Axons of sensory neurons conduct action potentials towards the CNS, and axons of motor neurons conduct action potentials away from the CNS. Axons also conduct action poten-tials from one part of the brain or spinal cord to another part. An axon may remain unbranched or may branch to form collateral (ko-lat′ er-ăl) axons. Axons can be surrounded by a highly special-ized insulating layer of cells called the myelin sheath (described in more detail in “Myelin Sheaths,”). 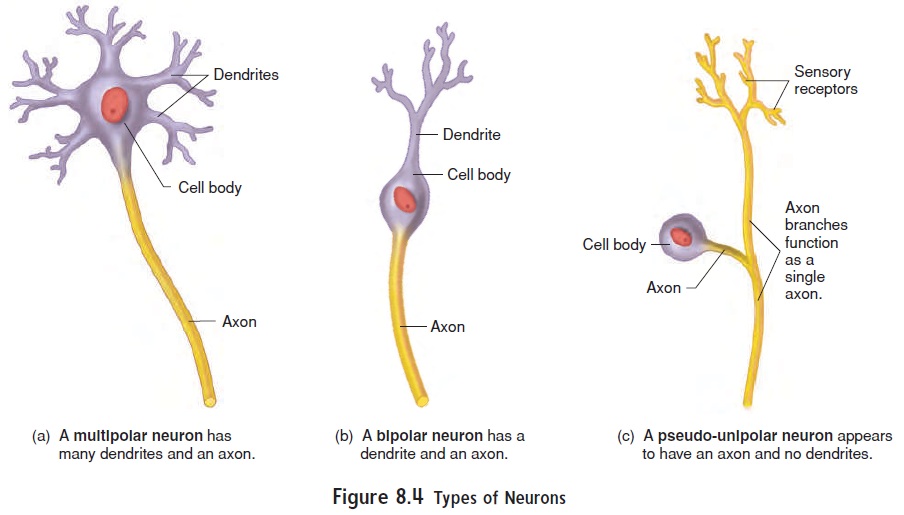 single axon. Most of the neurons within the CNS and nearly all motor neurons are multipolar. Bipolar neurons have two process-es: one dendrite and one axon. Bipolar neurons are located in some sensory organs, such as in the retina of the eye and in the nasal cavity. Most other sensory neurons are pseudo-unipolar. Pseudo-unipolar neurons have a single process extending from the cellbody. This process divides into two processes a short distance from the cell body. One process extends to the periphery, and the other extends to the CNS. The two extensions function as a single axon with small, dendritelike sensory receptors at the periphery. The axon receives sensory information at the periphery and transmits that information in the form of action potentials to the CNS.

Glial cells (glı̄′ăl, glē′ăl), orneuroglia(noo-rog′lē-ă; nerve glue),are the primarily supportive cells of the CNS and PNS, meaning these cells do not conduct action potentials. Neuroglia are far more numerous than neurons. Most neuroglia retain the ability to divide, whereas neurons do not. There are five types of glial cells. Astrocytes (as′trō-sı̄tz) serve as the major supporting cells in theCNS. In this role, astrocytes can stimulate or inhibit the signal-ing activity of nearby neurons. In addition, astrocytes participate with the blood vessel endothelium to form a permeability barrier, called the blood-brain barrier,between the blood and the CNS. Astrocytes help limit damage to neural tissue; however, the repair 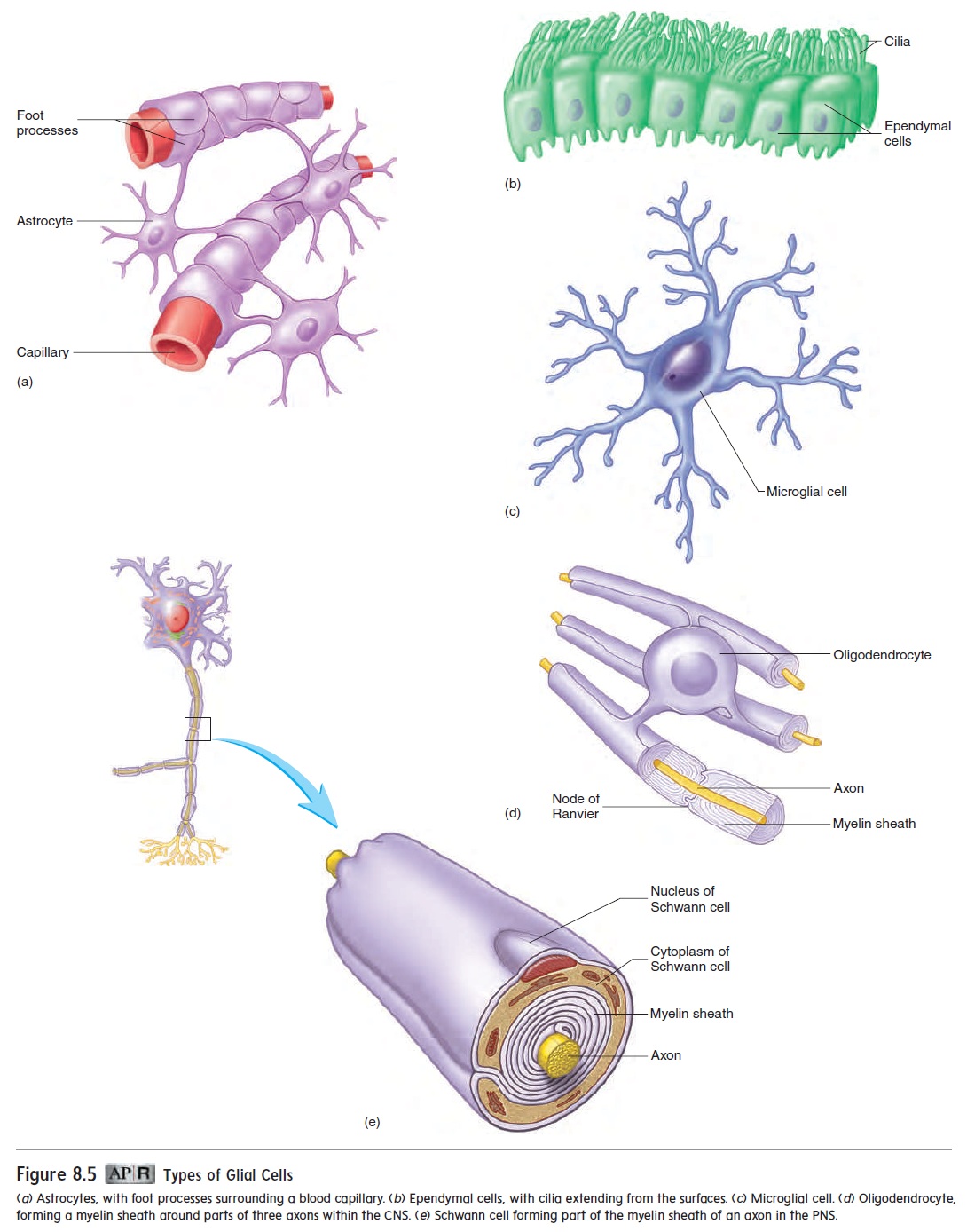 process can form a scar that blocks regeneration of damaged axons. Ependymal (ep-en′ di-măl) cells line the fluid-filled cavities (ventricles and canals) within the CNS. Some ependymal cells produce cerebrospinal fluid, and others, with cilia on the surface, help move the cerebrospinal fluid through the CNS. Microglia (mı̄-krog′ lē-ă) act as immune cells of the CNS. They help protect the brain by removing bacteria and cell debris. Oligodendrocytes (ol′ i-gō-den′ drō-sı̄tz) in the CNS and Schwann cells in the PNS provide an insulating material that surrounds axons (figure 8.5 and table 8.1).

Myelin sheaths are specialized layers that wrap around the axons of some neurons. These myelin sheaths are formed by the cell process-es of oligodendrocytes in the CNS and Schwann cells in the PNS (figure 8.5). Axons with these myelin sheaths are called myelinatedaxons (figure 8.6a). Each oligodendrocyte process or Schwann cellrepeatedly wraps around a segment of an axon to form a series of tightly wrapped cell membranes. Myelin is an excellent insulator that prevents almost all ion movement across the cell membrane. Gaps in the myelin sheath, called nodes of Ranvier (ron′ vē-ā), occur about every millimeter between the oligodendrocyte segments or between individual Schwann cells. Ion movement can occur at the nodes of Ranvier. Myelination of an axon increases the speed and efficiency of action potential generation along the axon. The details of action potentials are described fully in the next section.

Unmyelinated axons lack the myelin sheaths; however, these axons rest in indentations of the oligodendrocytes in the CNS and the Schwann cells in the PNS (figure 8.6b). A typical small nerve, which consists of axons of multiple neurons, usually contains more unmyelinated axons than myelinated axons.

White matter consists of bundles of parallel axons with theirmyelin sheaths, which are whitish in color. White matter of the CNS forms nerve tracts, or conduction pathways, which propagate action potentials from one area of the CNS to another. In the PNS, bundles of axons and associated connective tissue form nerves.