❖ Physical quantities are classified into two type three are fundamental and derived quantities.

❖ Fundamental base quantities are which cannot be expressed in terms of any other physical quantities. These are length, mass, time electric current, temperature, luminous intensity and amount of substance.

❖ Quantities that can be expressed in terms of fundamental quantities are called derived quantities. For example area, volume, velocity, acceleration, force etc.

2. How will you measure the diameter of the Moon using parallax method?

❖ Once the distance ‘D’ of a planet is determined the diameter ‘d’ angular size of the moon can be estimated by parallax method.

❖ Two diametrically opposite points M and N of moon are viewed through telescope from a point A on the earth. The angle α between the two directions viewed is measured. Then by considering MN as arc of length d of a circle with centre at A and distance D as radius, we can write. 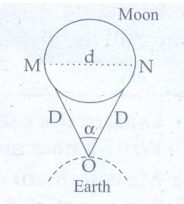 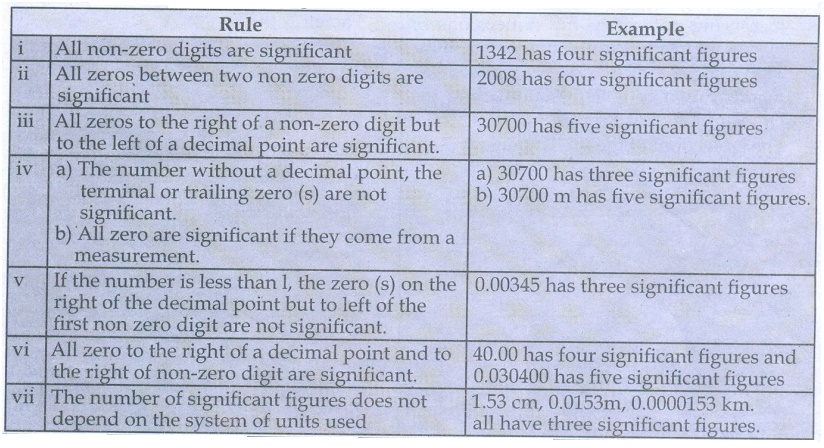 i. All non-zero digits are significant

ii. All zeros between two non zero digits are significant

iii. All zeros to the right of a non-zero digit but to the left of a decimal point are significant.

iv. a) The number without a decimal point, the terminal or trailing zero (s) are not significant.

b) All zero are significant if they come from a measurement.

v. If the number is less than 1, the zero (s) on the right of the decimal point but to left of the first non zero digit are not significant.

vii. The number of significant figures does not depend on the system of units used

4. What are the limitations of dimensional analysis?

1. This method gives no information about the dimensionless constants in the formula like1, 2………… π, e, etc.

2. This method cannot decide whether the given quantity is a vector or a scalar.

3. This method is not suitable to derive relations involving trigonmetric, exponential and logarithmic functions.

4. It cannot be applied to an equation involving more than three physical quantities.

5. Define precision and accuracy. Explain with one example.

Accuracy is a measure of the closeness of the measured value to the true value.

The precision of an instrument gives the minimum value that can be measured by it.

If a measurement is precise, that does not necessarily mean that it is accurate. How ever if the measurement is consistently accurate, it is also precise.