1. i) Explain the use of screw gauge and vernier caliper in measuring smaller distances.

i) Measurement of small distances :

● The screw gauge is an instrument used for measuring accurately the dimensions of objects up to a maximum of about 50 mm.

● The principle of the instrument is the magnification of linear motion using the circular motion of a screw. 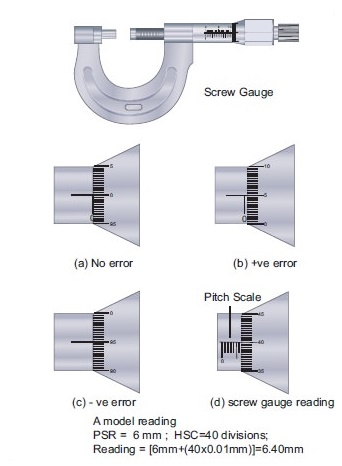 ● A vernier caliper is a versatile instrument for measuring the dimensions of an object namely diameter of a hole, or a depth of a hole.

● The least count of the vernier caliper is 0.1 mm. 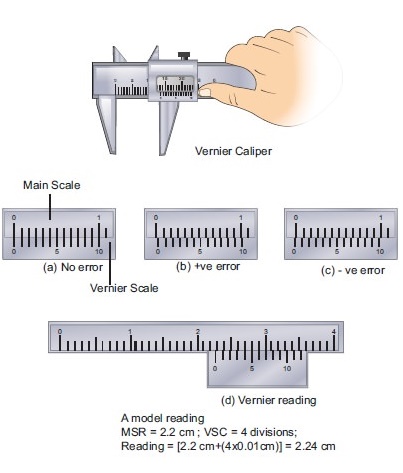 ii) Triangulation method for the height of an accessible object

● Let AB=h be the height of the tree or tower to be measured. Let C be the point of observation at distance x from place a range finder at C and measure the angle of elevation. <ABC = θ as shown in Figure.

Knowing its distance x, the height h can be determined. 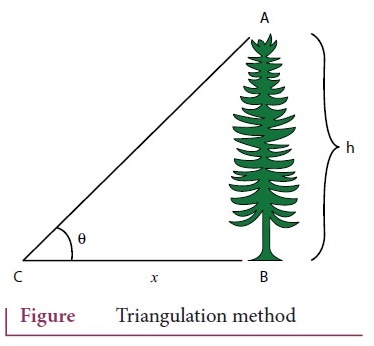 ● The word RADAR stands for Radio Detection and Ranging. A radar can be used to measure accurately the distance of a nearby planet such as Mars.

● In this method, radio waves are sent from transmitters, after reflection from the planet, they are detected by the receiver.

● By measuring, the time interval (t) between the instants the radio waves are sent and received, the distance of the planet can be determined as

This method can also be used to determine the height, at which an aeroplane flies from the ground. 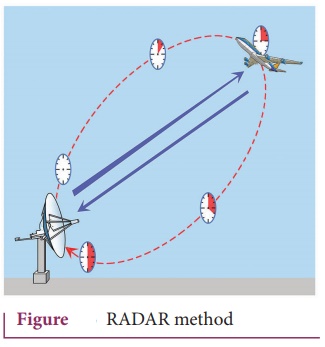 2. Explain in detail the various types of errors.

The uncertainty in a measurement is called an error. Random error, systematic error and gross error are the three possible errors.

● Systematic errors are reproducible inaccuracies that are consistently in the same direction.

These occur often due to a problem that persists throughout the experiment. Systematic errors can be classified as follows.

● When an instrument is not calibrated properly at the time of manufacture, instrumental errors may arise.

● If a measurement is made with a meter scale whose end is worn out, the result obtained will have errors.

● These errors can be corrected by choosing the instrument carefully.

2) Imperfections in experimental technique or procedure

● These errors arise due to the limitation in the experimental arrangement.

● As an example while performing experiments with a calorimeter, if there is no proper insulation, there will be radiation losses.

● This results in errors and to overcome these, necessary correction has to be applied.

These errors are due to individuals performing the experiment, may be due to incorrect initial setting up of the experiment or carelessness of the individual making the observation due to improper precautions.

4) Errors due to external causes

The change in the external conditions during an experiment can cause error in measurement. For example, change in temperature, humidity, or pressure during measurements may affect the result of the measurement.

● Random error may arise due to random and unpredictable variations in experimental conditions like pressure, temperature, voltage supply etc.

● Errors may also be due to personal errors by the observer who performs the experiment. Random errors are sometimes called "chance error".

● When different readings are obtained by a person every time he repeats the experiment, personal error occurs.

● If number of trial readings are taken in an experiment.

The arithmetic mean is

● The error caused due to shear carelessness of an observer is called gross error.

These errors can be minimized only when an observer is careful and mentally alert.

A number of measured quantities may be involved in the final calculation of an experiment. Different type of instruments might have been used for taking readings. Then we may have to look at the errors in measuring various quantities, collectively.

The error in the final result depends on

i) The errors in the individual measurements

ii) On the nature of mathematical operations performed to get the final result. So we should know the rules to combine the errors. .

The various possibilities of the propagation of combination of errors in different mathematical operations are discussed below:

(i) Error in the sum of two quantities

Let ΔA and ΔB be the absolute errors in the two quantities A and B respectively. Then,

The error ΔZ in Z is then given by

ii) Error in the product of two quantities.

Let ∆A and ∆B be the absolute errors in the two quantities A, and B, respectively. Consider the product Z=AB

4. Write short notes on the following.

a) Unit: An arbitrarily chosen standard of measurement of a quantity, which is accepted internationally is called unit of the quantity.

b) Rounding off: Calculators are widely used now-a-days to do calculations. The result given by a calculator has too many figures. In no case should the result have more significant figures than the figures involved in the data used for calculation. The result of calculation with numbers containing more than one uncertain digit should be rounded off.

Rules for Rounding off : 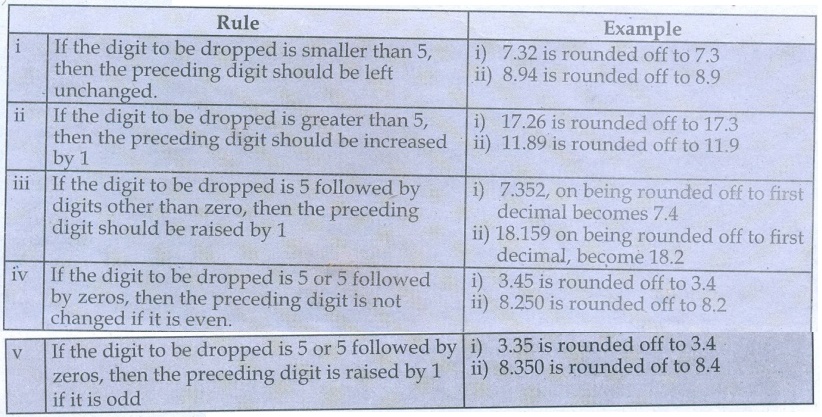 i) Dimensionless Variables : Physical quantities which have no dimensions, but have variable values are called dimensionless variables. Examples are specific gravity, Strain, refractive index etc.

5. Explain the principle of homogeniety of dimensions. What are its uses? Give example.

Principle of homogeneity of dimensions:

The principle of homogeneity of dimensions states that the dimensions of all the terms in a physical expression should be the same.

Uses : This method is used to

(i) Convert a physical quantity from one system of units to another.

(ii) Check the dimensional correctness of a given physical equation.

(i) To Convert a physical quantity from one system of units to another.

Example : Convert 76cm of mercury pressure into Nm-2 using the method of dimensions.

The dimensional formula of pressure P is (ML−1T−2)

ii) To check the dimensional correctness of a given physical equation

Apply dimensional formula on both sides

(Quantities of same dimension only can be added)

The dimensions of both sides are same. Hence the equation is dimensionally correct.

Here k is the dimensionless constant. Rewriting the above equation with dimensions.