1. Give two important characteristics of physiscorption

1. It is instantaneous and non specific 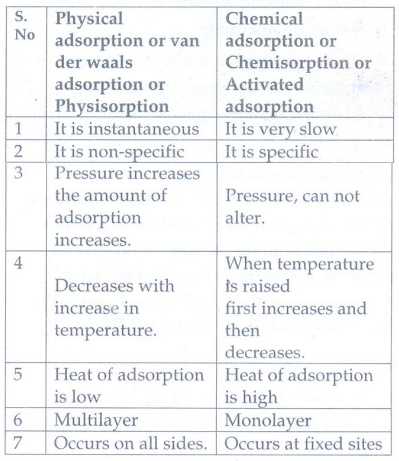 4. Decreases with increase in temperature.

5. Heat of adsorption is low

3. Pressure can not alter.

4. When temperature is raised first increases and then decreases.

5. Heat of adsorption is high

3. In case of chemisorption, why adsorption first increases and then decreases with temperature?

• Increase in temperature will provide the molecule necessary activation energy for chemical bond formation hence the rate of adsorption increases.

4. Which will be adsorbed more readily on the surface of charcoal and why? NH3 or O2 ?

• The critical temperature of ammonia gas is quite higher than carbon dioxide.

• Therefore it is easily combines with the surface of charcoal.

• Therefore NH3 will be more readily adsorbed on the surface of the charcoal than CO2.

5. Heat of adsorption is greater for chemisorptions than physisorption. Why?

• In adsorbed state the adsorbate is held on the surface of the adsorbent by strong chemical bond and it is much stronger than physisorption.

• Hence heat of adsorption is greater.

6. In a coagulation experiment 10 mL of a colloid (X) is mixed with distilled water and 0.01M solution of an electrolyte AB so that the volume is 20 mL. It was found that all solutions containing more than 6.6 mL of AB coagulate with in 5 minutes. What is the flocculation values of AB for sol (X)?

A minimum of 6.6mL of AB is required to coagulate the sol. The moles of AB in the sol is

7. Peptising agent is added to convert precipitate into colloidal solution. Explain with an example.

• Addition of suitable electrolytes to the precipitated particles give colloidal solution.

• The process is termed as peptisation and the electrolyte added is called peptising agent.

AgCl precipitate is converted to AgCl colloid by adding an peptising agent HCl.

8. What happens when a colloidal sol of Fe(OH)3 and As2S3 are mixed?

9. What is the difference between a sol and a gel?

• Due to solvation the interaction between the dispersed phase and dispersed medium is strong in the lyophillic colloidal sols.

• In lyophobic sol the stability is due to charge. The interaction between the dispersed phase and dispersion medium is very little. Hence lyophillic colloidal sols are more stable than lyophobic colloidal sol.

11. Addition of Alum purifies water. Why?

Addition of alum coagulate the suspended impurities in water and the drinking water is purified.

12. What are the factors which influence the adsorption of a gas on a solid?

i) Nature of adsorbent

i. Nature of adsorbent

• Higher the surface area of adsorbent, higher is the amount adsorbed.

• Permanent gases are having low critical temperature, can not be liquefied easily and adsorbed slowly. Eg. H2, N2 and O2

• In Physisorption, when pressure increases the amount of adsorption increases.

• Pressure can not alter the amount of chemisorption.

• Physisorption decreases with increase in temperature.

• When temperature is raised chemisorption first increases and then decreases

13. What are enzymes? Write a brief note on the mechanism of enzyme catalysis.

The following mechanism is proposed for the enzyme catalysis

Where E is the enzyme

S is the substrate (reactant)

P is the product. 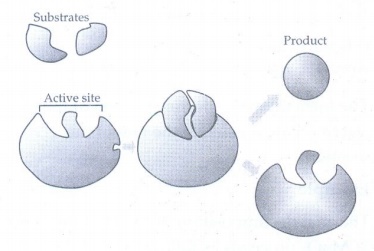 14. What do you mean by activity and selectivity of catalyst?

Activity: The reactants must get adsorbed strongly on the catalyst to become active. The activity depends on the strength of chemisorption.

Selectivity: it is ability of a catalyst to direct a reaction to yield a particular product selectively.

15. Describe some feature of catalysis by Zeolites.

• Extra cations are present in the framework, to balance the extra negative charge.

• It is shape selective.

• Reactant shape selectivity: When bulkier molecules in a reactant mixture are prevented from reaching the active sites within the zeolite crystal

• Transition state selectivity: If the transition state of a reaction is large compared to the pore size of the zeolite, then no product will be formed.

• Product selectivity: It is encountered when certain product molecules one too big to diffuse out of the zeolite pores

• Zeolites carrying protons are used in the petrochemical industry

16. Give three uses of emulsions.

2. The cleansing action of soap is due to the formation of emulsion of soap molecules with dirt and grease

3. Latex is the emulsion of natural rubber with negative particles. By heating rubber with sulphur, vulcanized rubbers are produced for tyres, tubes

17. Why does bleeding stop by rubbing moist alum

Blood is a colloidal form. When alum is rubbed to the bleeding part of the body the coagulation of blood takes place and the bleeding is arrested.

18. Why is desorption important for a substance to act as good catalyst?

• The formed product should leave from the surface of the catalyst to create free surface for other reactant molecule.

• If the desorption does not occur then the other reactants are left with no space on the surface of the catalyst and the yield will be poor.

• Hence desorption is important for a substance to act as good catalyst.

19. Comment on the statement: Colloid is not a substance but it is a state of substance.

The size of the colloidal particle is between 1 - 200 nm. Any particle is present between this size are behaves as colloid. Hence it is a state of substance and not a substance.

20. Explain any one method for coagulation

When colloidal sols with opposite charges are mixed mutual coagulation takes place. It is due to migration of ions from the surface of the particles

21. Write a note on electro osmosis

The movement of dispersion medium under the influence of electric potential is called electro osmosis.

A sol is electrically neutral. The medium carries an equal but opposite charge to that of dispersed particles.

Under the influence of electric field the medium moves in a direction opposite to that of the sol particles.

22. Write a note on catalytic poison

• The substances which decreases or completely destroys the activity of catalyst in a catalysed reaction are known as catalytic poisons.

• In the Haber's process, the Fe catalyst is poisoned by H2S.

23. Explain intermediate compound formation theory of catalysis with an example

iii) The intermediate reacts with other reactant or decompose to give products and the catalyst is regenerated.

C is the catalyst

The formation and decomposition of the intermediate accelerate the rate of the reaction.

Thermal decomposition of KClO3 in presence of MnO2 proceeds as follows.

MnO3 is an intermediate.

24. What is the difference between homogenous and hetrogenous catalysis? 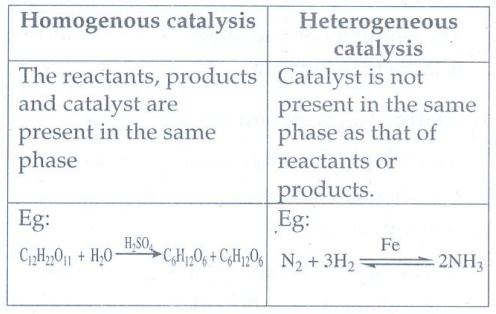 The reactants, products and catalyst are present in the same phase

Catalyst is not present in the same phase as that of reactants or products.

1. Reactant molecules diffuse from bulk to the catalyst surface.

2. The reactant molecules are adsorbed on the surface of the catalyst.

3. The adsorbed reactant molecules are activated and form activated complex which is decomposed to form the products

4. The product molecules are desorbed.

5. The product diffuse away from the surface of the catalyst.