Solid surfaces have the ability to attract the contacting species due to free valency or residual force on them.

Solid surfaces have the ability to attract the contacting species due to free valency or residual force on them.

• Adsorbent is the material on which adsorption takes place.

• Adsorbed substance is called an adsorbate.

• The surface of separation of the two phases where the concentration of adsorbed molecule is high is known as interface.

• The process of removing an adsorbed substance from the surface is called desorption.

• The gaseous molecules like He, Ne,O2 ,N2 ,SO 2 and NH3 and solutions of NaCl or KCl can be adsorbed by suitable adsorbents. These are referred as adsorbates.

• Silica gel and metals like Ni,Cu, Pt, Ag and Pd and certain colloids can act as adsorbents.

2. Adsorption is a spontaneous process and it is always accompanied by decrease in free energy. When ∆G reaches zero, the equilibrium is attained.

3. When molecules are adsorbed, there is always a decrease in randomness of the molecules. ie., ∆S < 0, and T∆S is negative. Hence, adsorption is exothermic.

M.C. Bain introduced a term ‘sorption’ to represent the simultaneous adsorption and absorption. T. Graham used a term occlusion for sorption of gases on metal surfaces.

(b) Adsorption of gases on charcoal.

The following table 10.1 illustrates the distinction between chemical and physical adsorption. 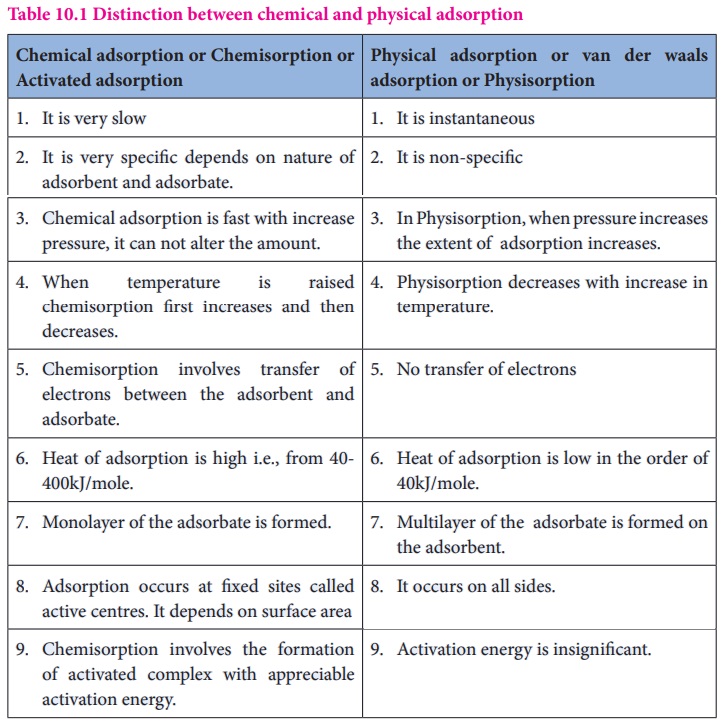 • It is very slow

• It is very specific depends on nature of adsorbent and adsorbate.

• Chemical adsorption is fast with increase pressure, it can not alter the amount.

• When temperature is raised chemisorption first increases and then decreases.

• Chemisorption involves transfer of electrons between the adsorbent and adsorbate.

• Monolayer of the adsorbate is formed.

• In Physisorption, when pressure increases the extent of adsorption increases.

• Physisorption decreases with increase in temperature.

• No transfer of electrons

• Heat of adsorption is low in the order of 40kJ/mole.

• Multilayer of the adsorbate is formed on the adsorbent.

• It occurs on all sides.

The adsorption is well understood by considering the various factors affecting it.

Qualitatively, the extent of surface adsorption depends on the following factors

(i) Nature of adsorbent

(iv) Concentration at a given temperature.

The nature of adsorbate can influence the adsorption. Gases like SO2 ,NH3 ,HCl and CO2 are easily liquefiable as they have greater van der waal’s force of attraction. On the other hand, permanent gases like H 2 ,N2 and O2 can not be liquefied easily. These permanent gases are having low critical temperature and adsorbed slowly, while gases with high critical temperature are adsorbed readily.