Enzymes are complex protein molecules with three dimensional structures. They catalyse the chemical reaction in living organism. They are often present in colloidal state and extremely specific in catalytic action. Each enzyme produced in a particular living cell can catalyse a particular reaction in the cell.

Some common examples for enzyme catalysis

1) The peptide glycyl L-glutamyl L-tyrosin is hydrolysed by an enzyme called pepsin.

3) The yeast contains the enzyme zymase which converts glucose into ethanol.

5) The enzyme urease present in soya beans hydrolyses the urea.

The following mechanism is proposed for the enzyme catalysis

Where E is the enzyme, S the substrate (reactant), ES represents activated complex and P the products. 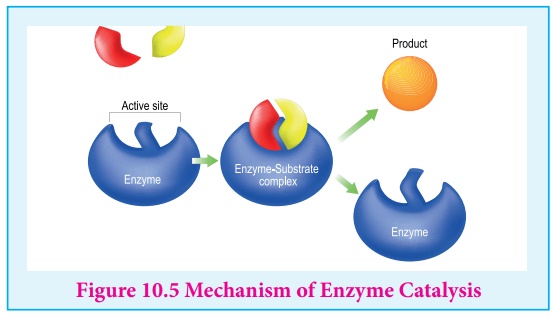 (i) Effective and efficient conversion is the special characteristic of enzyme catalysed reactions. An enzyme may transform a million molecules of reactant into product in a minute.

For this reaction, the activation energy is 18k cal/mole without a catalyst.

With colloidal platinum as a catalyst the activation energy is 11.7kcal /mole

But with the enzyme catalyst the activation energy of this reaction is less than 2kcal/mole.

• During high fever, as body temperature rises the enzymatic activity may collapse and lead to danger.

4. The rate of enzyme catalysed reactions varies with the pH of the system.

The rate is maximum at a pH called optimum pH.

5. Enzymes can be inhibited i.e. poisoned.

Activity of an enzyme is decreased and destroyed by a poison.

The physiological action of drugs is related to their inhibiting action.

Example: Sulpha drugs. Penicillin inhibits the action of bacteria and used for curing diseases like pneumonia, dysentery, cholera and other infectious diseases.

6. Catalytic activity of enzymes is increased by coenzymes or activators. 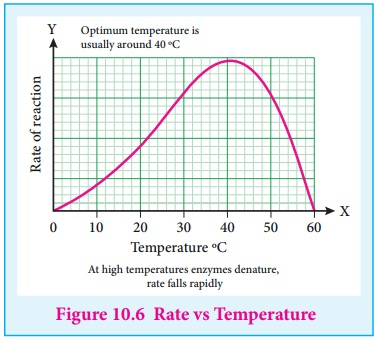 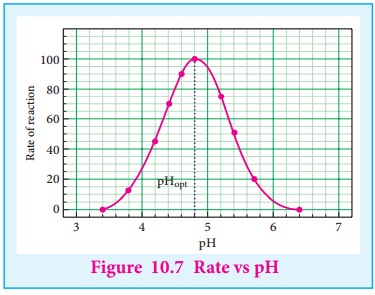