3) Colloidal solutions are heterogeneous in nature having two distinct phases

The colour of a sol is not always the same as the colour of the substance in the bulk. For example bluish tinge is given by diluted milk in reflected light and reddish tinge in transmitted light.

Colour of the sol, generally depends on the following factors.

• Wavelength of source of light.

• Size and shape of colloidal particle

• whether the observer views the reflected light or transmitted light.

3) Colloidal solutions are heterogeneous in nature having two distinct phases.

Though experiments like dialysis, ultrafiltration and ultracentrifuging clearly show the heterogeneous nature in the recent times colloidal solution are considered as border line cases.

Colloidal solutions are quite stable i.e. they are not affected by gravity.

When the colloidal solution is dilute, it is stable. When the volume of medium is decreased coagulation occurs. Generally, density of sol decreases with decrease in the concentration.

It is very interesting to know the various shapes of colloidal particles. Here are some examples

Colloids have optical property. When a homogeneous solution is seen in the direction of light, it appears clear but it appears dark, in a perpendicular direction. 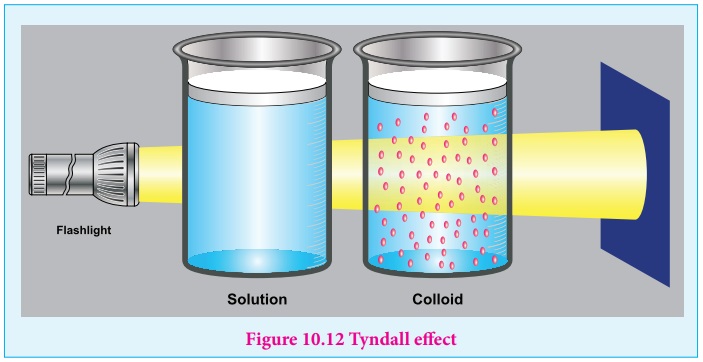 But when light passes through colloidal solution, it is scattered in all directions. This effect was first observed by Faraday, but investigations are made by Tyndall in detail, hence called as Tyndall effect.

The colloidal particles absorb a portion of light and the remaining portion is scattered from the surface of the colloid. Hence the path of light is made clear.

Robert Brown observed that when the pollen grains suspended in water were viewed through ultra microscope, they showed a random, zigzag ceaseless motion.

This is called Brownian movement of colloidal particles.

This can be explained as follows

The colloidal sol particles are continuously bombarded with the molecules of the dispersion medium and hence they follow a zigzag, random, continuous movement.

2. to confirm kinetic theory which considers the ceaseless rapid movement of molecules that increases with increase in temperature.

3. to understand the stability of colloids: As the particles in continuous rapid movement they do not come close and

hence not get condensed. That is Brownian movement does not allow the particles to be acted on by force of gravity. 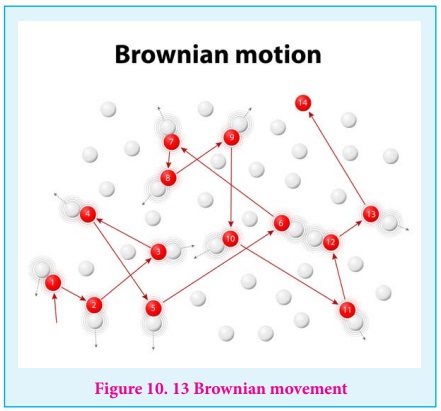 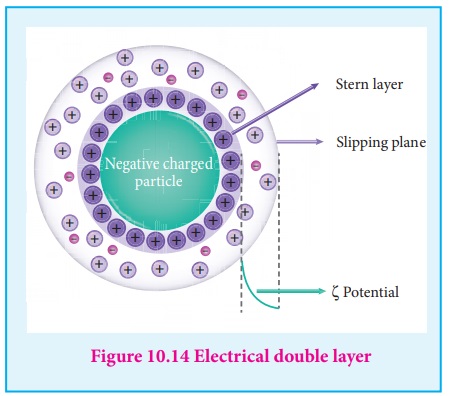 As the particles nearby are having similar charges, they cannot come close and condense.

Hence this helps to explain the stability of a colloid.

When electric potential is applied across two platinum electrodes dipped in a hydrophilic sol, the dispersed particles move toward one or other electrode. 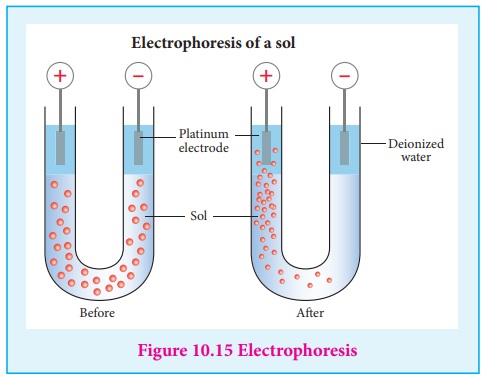 Few examples of charges of sols detected by electrophoresis are given below:

A sol is electrically neutral. Hence the medium carries an equal but opposite charge to that of dispersed particles. When sol particles are prevented from moving, under the influence of electric field the medium moves in a direction opposite to that of the sol particles. This movement of dispersion medium under the influence of electric potential is called electro osmosis.

The flocculation and settling down of the sol particles is called coagulation.

Various method of coagulation are given below:

(i) Addition of electrolytes

(i) Addition of electrolytes

A negative ion causes the precipitation of positively charged sol and vice versa.

In the electrophoresis, charged particles migrate to the electrode of opposite sign. It is due to neutralization of the charge of the colloids. The particles are discharged and so they get precipitated.

When colloidal sols with opposite charges are mixed mutual coagulation takes place. It is due to migration of ions from the surface of the particles.

When boiled due to increased collisions, the sol particles combine and settle down.

A small amount of gelatine sol is added to gold sol to protect the gold sol.

Zsigmondy introduced the term ‘gold number’ as a measure of protecting power of a colloid. Gold number is defined as the number of milligrams of hydrophilic colloid that will just prevent the precipitation of 10ml of gold sol on the addition of 1ml of 10% NaCl solution. Smaller the gold number greater the protective power.