The final control we consider in depth is secure e-mail. Think about how much you use e-mail and how much you rely on the accuracy of its contents.

The final control we consider in depth is secure e-mail. Think about how much you use e-mail and how much you rely on the accuracy of its contents. How would you react if you received a message from your instructor saying that because you had done so well in your course so far, you were excused from doing any further work in it? What if that message were a joke from a classmate? We rely on e-mail's confidentiality and integrity for sensitive and important communications, even though ordinary e-mail has almost no confidentiality or integrity. In this section we investigate how to add confidentiality and integrity protection to ordinary e-mail.

E-mail is vital for today's commerce, as well a convenient medium for communications among ordinary users. But, as we noted earlier, e-mail is very public, exposed at every point from the sender's workstation to the recipient's screen. Just as you would not put sensitive or private thoughts on a postcard, you must also acknowledge that e-mail messages are exposed and available for others to read.

Sometimes we would like e-mail to be more secure. To define and implement a more secure form, we begin by examining the exposures of ordinary e-mail.

Confidentiality and content forgery are often handled by encryption. Encryption can also help in a defense against replay, although we would also have to use a protocol in which each message contains something unique that is encrypted. Symmetric encryption cannot protect against forgery by a recipient, since both sender and recipient share a common key; however, public key schemes can let a recipient decrypt but not encrypt. Because of lack of control over the middle points of a network, senders or receivers generally cannot protect against blocked delivery.

If we were to make a list of the requirements for secure e-mail, our wish list would include the following protections.

message integrity (what the receiver sees is what was sent)

sender authenticity (the receiver is confident who the sender was)

nonrepudiation (the sender cannot deny having sent the message)

Not all these qualities are needed for every message, but an ideal secure e-mail package would allow these capabilities to be invoked selectively.

The standard for encrypted e-mail was developed by the Internet Society, through its architecture board (IAB) and research (IRTF) and engineering (IETF) task forces. The encrypted e-mail protocols are documented as an Internet standard in documents 1421, 1422, 1423, and 1424 [LIN93, KEN93, BAL93, KAL93a]. This standard is actually the third refinement of the original specification.

One of the design goals for encrypted e-mail was allowing security-enhanced messages to travel as ordinary messages through the existing Internet e-mail system. This requirement ensures that the large existing e-mail network would not require change to accommodate security. Thus, all protection occurs within the body of a message.

Because the protection has several aspects, we begin our description of them by looking first at how to provide confidentiality enhancements. The sender chooses a (random) symmetric algorithm encryption key. Then, the sender encrypts a copy of the entire message to be transmitted, including FROM:, TO:, SUBJECT:, and DATE: headers. Next, the sender prepends plaintext headers. For key management, the sender encrypts the message key under the recipient's public key, and attaches that to the message as well. The process of creating an encrypted e-mail message is shown in Figure 7-43. 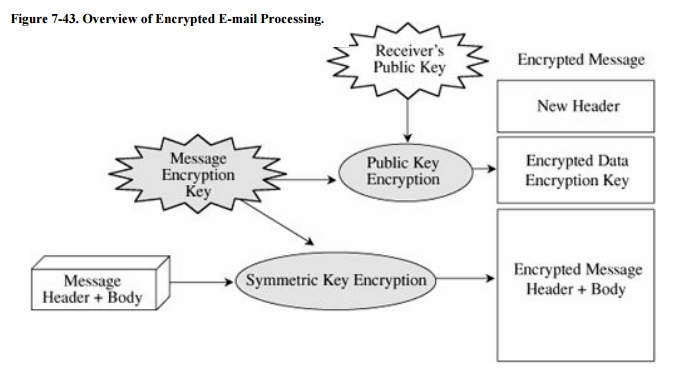 Encryption can potentially yield any string as output. Many e-mail handlers expect that message traffic will not contain characters other than the normal printable characters. Network e-mail handlers use unprintable characters as control signals in the traffic stream. To avoid problems in transmission, encrypted e- mail converts the entire ciphertext message to printable characters. An example of an encrypted e-mail message is shown in Figure 7-44. Notice the three portions: an external (plaintext) header, a section by which the message encryption key can be transferred, and the encrypted message itself. (The encryption is shown with shading.) 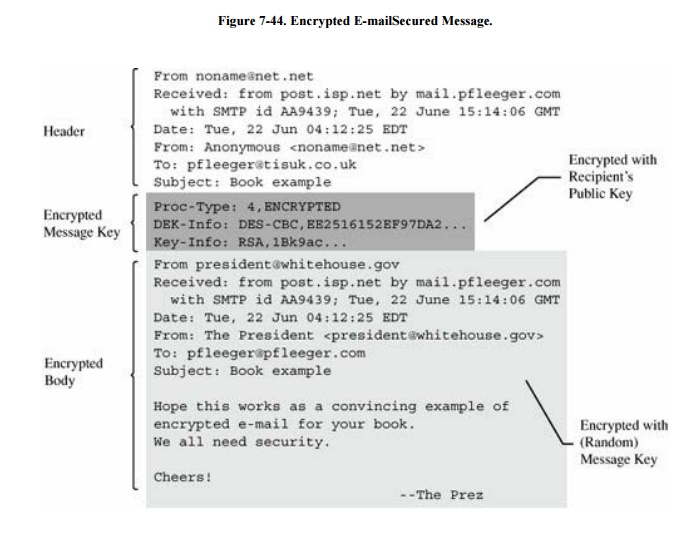 In addition to confidentiality, we may want various forms of integrity for secure e-mail. 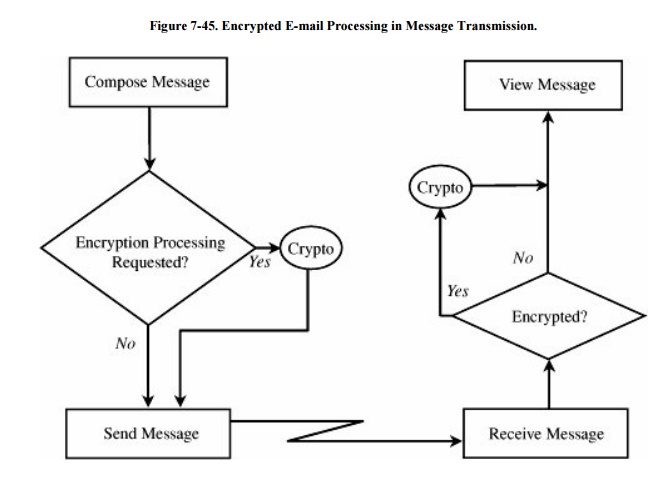 S/MIME (discussed later in this section) can accommodate the exchange of other than just text messages: support for voice, graphics, video, and other kinds of complex message parts.

Encrypted e-mail provides strong end -to-end security for electronic mail. Triple DES, AES, and RSA cryptography are quite strong, especially if RSA is used with a long bit key (1024 bits or more). The vulnerabilities remaining with encrypted e-mail come from the points not covered: the endpoints. An attacker with access could subvert a sender's or receiver's machine, modifying the code that does the privacy enhancements or arranging to leak a cryptographic key.

Encrypted e-mail programs are available from many sources. Several universities (including Cambridge University in England and The University of Michigan in the United States) and companies (BBN, RSA-DSI, and Trusted Information Systems) have developed either prototype or commercial versions of encrypted e-mail.

PGP stands for Pretty Good Privacy. It was invented by Phil Zimmerman in 1991. Originally a free package, it became a commercial product after being bought by Network Associates in 1996. A freeware version is still available. PGP is widely available, both in commercial versions and freeware, and it is heavily used by individuals exchanging private e-mail.

PGP addresses the key distribution problem with what is called a "ring of trust" or a user's "keyring." One user directly gives a public key to another, or the second user fetches the first's public key from a server. Some people include their PGP public keys at the bottom of e-mail messages. And one person can give a second person's key to a third (and a fourth, and so on). Thus, the key association problem becomes one of caveat emptor: "Let the buyer beware." If I am reasonably confident that an e-mail message really comes from you and has not been tampered with, I will use your attached public key. If I trust you, I may also trust the keys you give me for other people. The model breaks down intellectually when you give me all the keys you received from people, who in turn gave you all the keys they got from still other people, who gave them all their keys, and so forth.

You sign each key you give me. The keys you give me may also have been signed by other people. I decide to trust the veracity of a key-and-identity combination, based on who signed the key.

PGP does not mandate a policy for establishing trust. Rather, each user is free to decide how much to trust each key received.

The PGP processing performs some or all of the following actions, depending on whether confidentiality, integrity, authenticity, or some combination of these is selected:

Create a random session key for a symmetric algorithm.

Encrypt the message, using the session key (for message confidentiality).

Encrypt the session key under the recipient's public key.

Generate a message digest or hash of the message; sign the hash by encrypting it with the sender's private key (for message integrity and authenticity).

Transmit the message to the recipient.

The recipient reverses these steps to retrieve and validate the message content.

S/MIME is very much like PGP and its predecessors, PEM (Privacy-Enhanced Mail) and RIPEM. The Internet standards documents defining S/MIME (version 3) are described in [HOU99] and [RAM99]. S/MIME has been adopted in commercial e-mail packages, such as Eudora and Microsoft Outlook.

The principal difference between S/MIME and PGP is the method of key exchange. Basic PGP depends on each user's exchanging keys with all potential recipients and establishing a ring of trusted recipients; it also requires establishing a degree of trust in the authenticity of the keys for those recipients. S/MIME uses hierarchically validated certificates, usually represented in X.509 format, for key exchange. Thus, with S/MIME, the sender and recipient do not need to have exchanged keys in advance as long as they have a common certifier they both trust.

S/MIME works with a variety of cryptographic algorithms, such as DES, AES, and RC2 for symmetric encryption.

S/MIME performs security transformations very similar to those for PGP. PGP was originally designed for plaintext messages, but S/MIME handles (secures) all sorts of attachments, such as data files (for example, spreadsheets, graphics, presentations, movies, and sound). Because it is integrated into many commercial e-mail packages, S/MIME is likely to dominate the secure e-mail market.