S/MIME (Secure/Multipurpose Internet Mail Extension) is a security enhancement to the MIME Internet e-mail format standard, based on technology from RSA Data Security. S/MIME is defined in a number of documents, most importantly RFCs 3369, 3370, 3850 and 3851.

S/MIME (Secure/Multipurpose Internet Mail Extension) is a security enhancement to the MIME Internet e-mail format standard, based on technology from RSA Data Security. S/MIME is defined in a number of documents, most importantly RFCs 3369, 3370, 3850 and 3851.

MIME is an extension to the RFC 822 framework that is intended to address some of the problems and limitations of the use of SMTP (Simple Mail Transfer Protocol) or some other mail transfer protocol and RFC 822 for electronic mail. Following are the limitations of SMTP/822 scheme:

2.     SMTP cannot transmit text data that includes national language characters because these are represented by 8-bit codes with values of 128 decimal or higher, and SMTP is limited to 7-bit ASCII.

3.     SMTP servers may reject mail message over a certain size.

4.     SMTP gateways that translate between ASCII and the character code EBCDIC do not use a consistent set of mappings, resulting in translation problems.

6.     Some SMTP implementations do not adhere completely to the SMTP standards defined in RFC 821. Common problems include:

o   Deletion, addition, or reordering of carriage return and linefeed

o   Padding of lines in a message to the same length

MIME is intended to resolve these problems in a manner that is compatible with existing RFC 822 implementations. The specification is provided in RFCs 2045 through 2049.

1.     Five new message header fields are defined, which may be included in an RFC 822 header. These fields provide information about the body of the message.

3.     Transfer encodings are defined that enable the conversion of any content format into a form that is protected from alteration by the mail system.

In this subsection, we introduce the five message header fields. The next two subsections deal with

3. The five header fields defined in MIME are as follows:

o   MIME-Version: Must have the parameter value 1.0. This field indicates that the message conforms to RFCs 2045 and 2046.

o   Content-Type: Describes the data contained in the body with sufficient detail

o   Content-Transfer-Encoding: Indicates the type of transformation that has been used to represent the body of the message in a way that is acceptable for mail transport.

o   Content-Description: A text description of the object with the body; this is useful when the object is not readable (e.g., audio data).

The bulk of the MIME specification is concerned with the definition of a variety of content types. This reflects the need to provide standardized ways of dealing with a wide variety of information representations in a multimedia environment.

Below lists the content types specified in RFC 2046. There are seven different major types of content and a total of 15 subtypes 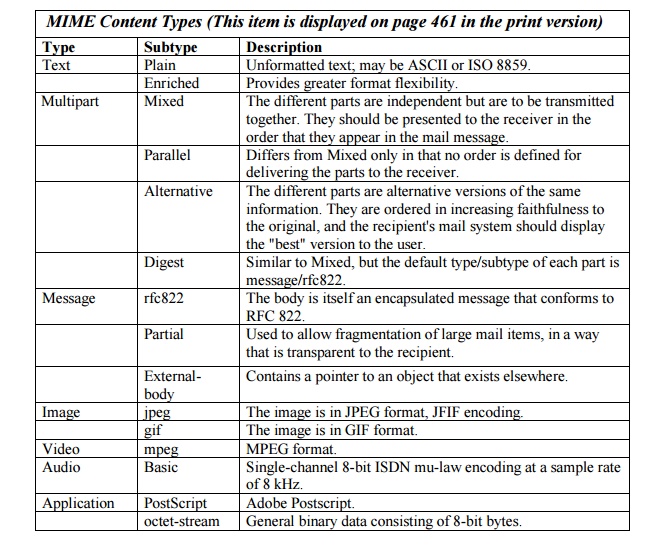 For the text type of body, no special software is required to get the full meaning of the text, aside from support of the indicated character set. The primary subtype is plain text, which is simply a string of ASCII characters or ISO 8859 characters. The enriched subtype allows greater formatting flexibility. The multipart type indicates that the body contains multiple, independent parts. The Content-Type header field includes a parameter, called boundary, that defines the delimiter between body parts.

The multipart/digest subtype is used when each of the body parts is interpreted as an RFC 822 message with headers. This subtype enables the construction of a message whose parts are individual messages. For example, the moderator of a group might collect e-mail messages from participants, bundle these messages, and send them out in one encapsulating MIME message.

The message type provides a number of important capabilities in MIME. The message/rfc822 subtype indicates that the body is an entire message, including header and body. Despite the name of this subtype, the encapsulated message may be not only a simple RFC 822 message, but also any MIME message.

The message/partial subtype enables fragmentation of a large message into a number of parts, which must be reassembled at the destination. For this subtype, three parameters are specified in the Content-Type: Message/Partial field: an id common to all fragments of the same message, a sequence number unique to each fragment, and the total number of fragments.

The application type refers to other kinds of data, typically either uninterpreted binary data or information to be processed by a mail-based application.

The other major component of the MIME specification, in addition to content type specification, is a definition of transfer encodings for message bodies. The objective is to provide reliable delivery across the largest range of environments.

The MIME standard defines two methods of encoding data. The Content-Transfer-Encoding field can actually take on six values. For SMTP transfer, it is safe to use the 7bit form. The 8bit and binary forms may be usable in other mai transport contexts. Another Content-Transfer-Encoding value is x-token, which indicates that some other encoding scheme is used, for which a name is to be supplied. The two actual encoding schemes defined are quoted-printable and base64.

The quoted-printable transfer encoding is useful when the data consists largely of octets that correspond to printable ASCII characters. In essence, it represents nonsafe characters by the hexadecimal representation of their code and introduces reversible (soft) line breaks to limit message lines to 76 characters.

The base64 transfer encoding, also known as radix-64 encoding, is a common one for encoding arbitrary binary data in such a way as to be invulnerable to the processing by mail transport programs.

An important concept in MIME and S/MIME is that of canonical form. Canonical form is a format, appropriate to the content type, that is standardized for use between systems. This is in contrast to native form, which is a format that may be peculiar to a particular system.