Many enzymes act on nucleic acids. A group of specific enzymes acts in concert to ensure the faithful replication of DNA, and another group directs the transcription of the base sequence of DNA into that of RNA. Other enzymes, called nucleases, catalyze the hydrolysis of the phosphodiester backbones of nucleic acids. Some nucleases are specific for DNA; others are specific for RNA. Cleavage from the ends of the molecule (by exonucleases) is known, as is cleavage in the middle of the chain (by endonucleases). Some enzymes are specific for single-stranded nucleic acids, and others cleave double-stranded ones. One group of nucleases, restriction endonucleases, has played a crucial role in the development of recombinant DNA technology.

Restriction enzymes were discovered in the course of genetic investigations of bacteria and bacteriophages (phages for short; from the Greek phagein,“to eat”), the viruses that infect bacteria. The researchers noted that bacte-riophages that grew well in one strain of the bacterial species they infected frequently grew poorly (had restricted growth) in another strain of the same species. Further work showed that this phenomenon arises from a subtle differ-ence between the phage DNA and the DNA of the strain of bacteria in which phage growth is restricted. This difference is the presence of methylated bases at certain sequence-specific sites in the host DNA and not in the viral DNA. 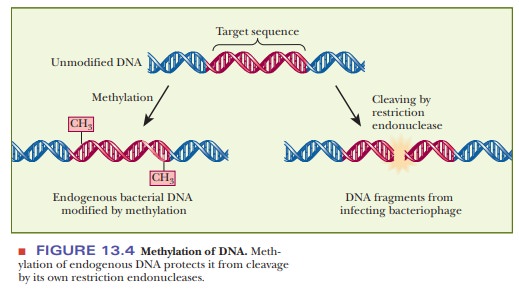 The growth-restricting host cells contain cleavage enzymes, the restriction endonucleases, that produce double-chain breaks at the unmethylated specific sequences in phage DNA; the cells’ own corresponding DNA sequences, in which methylated bases occur, are not attacked, as shown in Figure 13.4. These cleavage enzymes consequently degrade DNA from any source but the host cell. The most immediate consequence is a slowing of the growth of the phage in that bacterial strain, but the important thing for our discussion is that DNA from any source can be cleaved by such an enzyme if it contains the target sequence. More than 800 restriction endonucleases have been discovered in a variety of bacterial species. More than 100 specific sequences are recognized by one or more of these enzymes. Table 13.1 shows several target sequences. 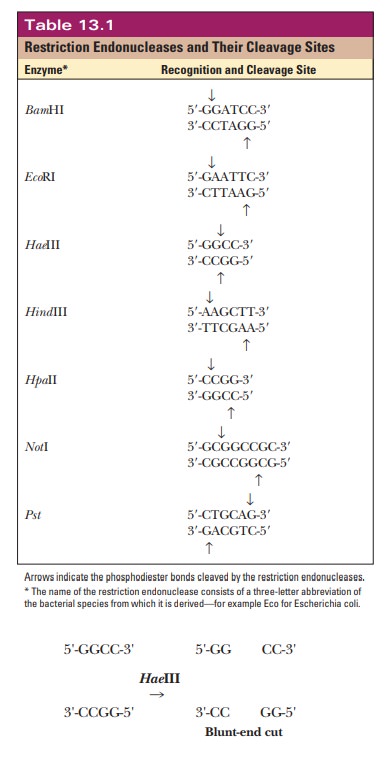 Each restriction endonuclease hydrolyzes only a specific bond of a specific sequence in DNA. The sequences recognized by restriction endonucleases- their sites of action-read the same from left to right as they do from right to left (on the complementary strand). The term for such a sequence is a palindrome. (“Able was I ere I saw Elba” and “Madam, I’m Adam” are well-known linguistic palindromes). A typical restriction endonuclease called EcoRI is isolated from E. coli (each restriction endonuclease is designated by an abbreviation of thename of the organism in which it occurs). The EcoRI site in DNA is 5'-GAATTC-3', where the base sequence on the other strand is 3'-CTTAAG- 5'. The sequence from left to right on one strand is the same as the sequence from right to left on the other strand. The phosphodiester bond between G and A is the one hydrolyzed. This same break is made on both strands of the DNA. There are four nucleotide residues-two adenines and two thymines in each strand- between the two breaks on opposite strands, leaving sticky ends, which can still be joined by hydrogen bonding between the complementary bases. With the ends held in place by the hydrogen bonds, the two breaks can then be resealed covalently by the action of DNA ligases (Figure 13.5). If no ligase is present, the ends can remain separated, and the hydrogen bonding at the sticky ends holds the molecule together until gentle warming or vigorous stirring effects a separation. Some enzymes, such as HaeIII, cut in a way that leave a blunt end. 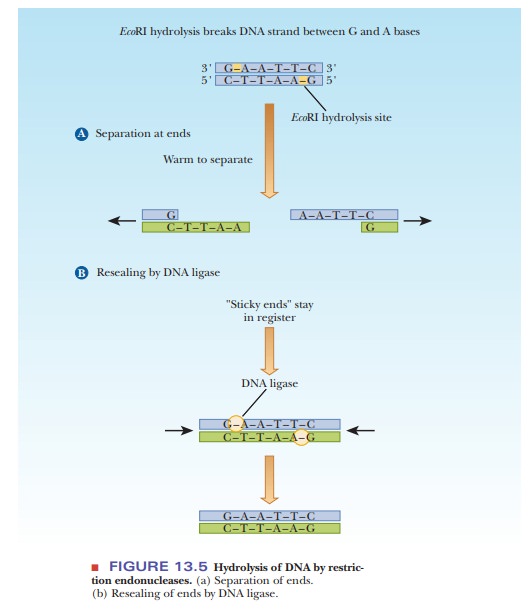 To make life more challenging for molecular biologists, some enzymes can also cut with less than absolute specificity. This is called star (*) activity and can often be seen if the enzyme concentration is too high or the enzyme is incubated with the DNA too long.

Why are sticky ends important?

As we will see in the next section, the production of sticky ends by a restriction enzyme is very important to the process of creating recombinant DNA. Once DNA is cut with a particular enzyme, the sticky ends fit back together. At that point it does not matter whether the pieces came from the original piece of DNA. In other words, pieces of DNA from different sources can be put together as long as they were both cut with the same restriction enzyme.

Restriction endonucleases are enzymes produced by bacteria that hydro-lyze the phosphodiester backbone of DNA at specific sequences.

The sequences targeted by restriction endonucleases are palindromes, meaning their sequence reads the same on both strands going in the same direction.

Most restriction enzymes cut DNA in a way that leaves sticky ends that are very useful for recombining DNA from different sources.