It has been suggested that tissue samples be taken from all convicted felons to allow for identification of their presence at future crime sites by DNA fingerprinting.

It has been suggested that tissue samples be taken from all convicted felons to allow for identification of their presence at future crime sites by DNA fingerprinting. This may seem very desirable, but some ethical and constitutional questions must first be answered. Nevertheless, DNA testing has been used to determine whether people currently in custody might have been involved in unsolved crimes. One crime frequently examined in this way is rape, because body fluids are usually left behind. Many unsolved crimes are being solved, and some convicted prisoners are being found innocent. In at least one bizarre case, a felon was found innocent of the crime for which he was in jail, only to be rearrested in a few weeks because his DNA matched samples found on rape victims in three other cases. 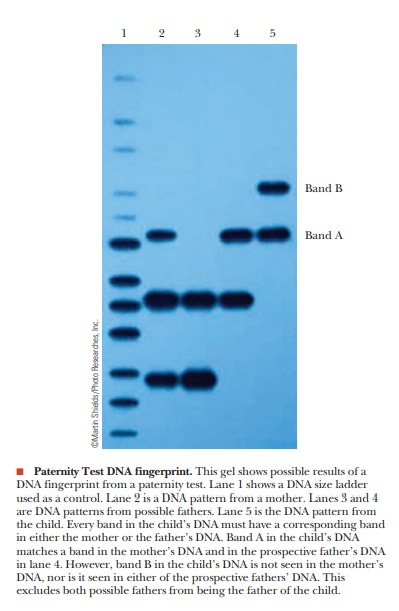 The power of DNA testing cannot be overemphasized. In the trial of O. J. Simpson, the identity of the DNA was never questioned, although the defense successfully raised questions as to whether the evidence had been planted. In most cases, DNA evidence results in the release of innocent suspects in a crime. When the DNA matches, however, the rate of plea bargaining goes up, and the crimes are solved without long and expensive court trials.

Establishing paternity is a natural application for DNA testing. The DNA markers found in a child must arise from either the mother or the father. A man who is suspected of being the father of a particular child is immediately excluded from consideration if that child’s DNA contains markers that are not found in the DNA of the mother or the suspect father. It is more difficult to prove conclusively that a person is the father of a particular child because it is usually too expensive to test enough markers to pro-vide conclusive proof. However, in cases in which there are only two or three candidate fathers, it is usually possible to determine the correct one.