The idea of genetic engineering in humans often upsets people because they are fearful of “playing God.”

The idea of genetic engineering in humans often upsets people because they are fearful of “playing God.” Genetic manipulations in plants appear to cause less controversy, although many people are still concerned about the practice. Nevertheless, many types of modifications have been made, and some have been introduced with little fanfare and have shown some signs of success. Several examples are listed here. It is important to realize that many of the modifications that have been made using genetic engineering are just controlled versions of the selective breeding used for centuries to improve crop and animal production.

Disease resistance. Because most high-production crops involvespecialized strains, many are more susceptible to fungal disease and insect damage. As a consequence, many herbicides and insec-ticides are applied liberally during the growing season. In many cases, other plants have natural resistance to these pests. When the gene that produces the resistance can be isolated, it can be transferred into other plants. There has been limited success in transferring such resistance to crop species. In 2000, the public became more aware of genetically modified (GM) food crops because of news about Bt corn, a crop carrying a bacterial gene that produces a toxin poisonous to certain caterpillars. The Bt gene, from Bacillus thuringensis, has been put into corn and cot-ton to increase crop yields by killing the caterpillars that would otherwise eat those crops. It also reduces the amount of pesticides needed to grow the crops. On the negative side is the poten-tial harm to other species. For example, environmental groups oppose the planting of Bt corn because of its effect on the mon-arch butterfly in lab tests. 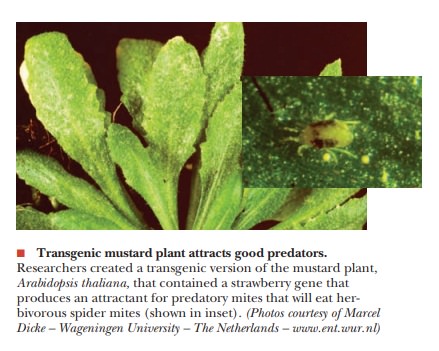 Nitrogen fixation. Nitrogen fixation is most easily accomplished bybacteria that grow in nodules on the roots of certain legumes, such as beans, peas, and alfalfa. We now realize that the genes of the nitrogen-fixing bacteria actually become shared with the genes of the host plant. Much research is going on to determine whether these genes could be incorporated into other plants, which would reduce the amount of nitrogen fertilizer needed for maximal plant growth and crop production.

Frost-free plants. Many marine organisms, such as fish found inthe Antarctic, produce a so-called antifreeze protein, a pro-tein characterized by its hydrophobic surface, which prevents the formation of ice crystals at low temperature. In plants exposed to freezing temperatures, ice crystals in their tissues actually cause the frost damage. Insertion of the gene for the antifreeze protein into strawberries and potatoes, for exam-ple, has resulted in crops that are stable during late spring frost or in areas with very short growing seasons. Much con-troversy has ensued over these crops because, in each case, a foreign gene from a nonplant species was introduced into a plant. This type of cross-species gene modification causes widespread concern, even though the taste and texture of the modified product is indistinguishable from those of foods produced by unmodified plants.

Tomatoes with a long shelf life. The Flavr Savr tomato has agenetic modification, but one in which no new gene has been introduced. Rather, one of the plant’s own genes has been deactivated. The gene in question is the one that allows the tomato plant to produce ethylene, a key compound in the ripening process. Because this gene has been deactivated, the tomatoes mature on the plant until they just begin to show some pink color-the exact stage at which tomatoes are picked and sent to market. Typically, fields of unmodified tomatoes need to be picked as many as nine times in a sea-son, because the tomatoes all ripen at different rates. When an unmodified tomato ripens, it continues to make ethylene, which leads to overripening, softening, and deterioration. Fields of the modified tomatoes can be picked once or twice, and the harvested fruits can be made to ripen as needed by exposing them to exogenous ethylene gas. Because the Flavr Savr tomato does not make its own ethylene, the shelf life of the ripe, ready-to-eat tomato is increased. The financial sav-ing made possible by less time spent picking tomatoes and the extended shelf life results in a cheaper and better product. Best of all, the taste is indistinguishable from that of unmodi-fied tomatoes.

Increased milk production. Much controversy exists over provid-ing cows with supplemental bovine somatotropin (BST), also called growth hormone, a hormone that increases metabolism and milk production in dairy cows. The controversy centers on human consumption of the hormone. However, BST is a pep-tide hormone, so it is hydrolyzed in the digestive tract and is not absorbed directly into the human bloodstream. Furthermore, all milk must contain some of this hor-mone, because the cow cannot produce milk without it. A more soundly based concern about BST supplementation in dairy cows is that the cows given extra BST often develop mastitis, an inflammation of the udder caused by bacterial infection. Masti-tis is frequently treated with high doses of antibiotics, and some of these antibiotics could end up in the milk, causing problems for people with certain food sensitivity.