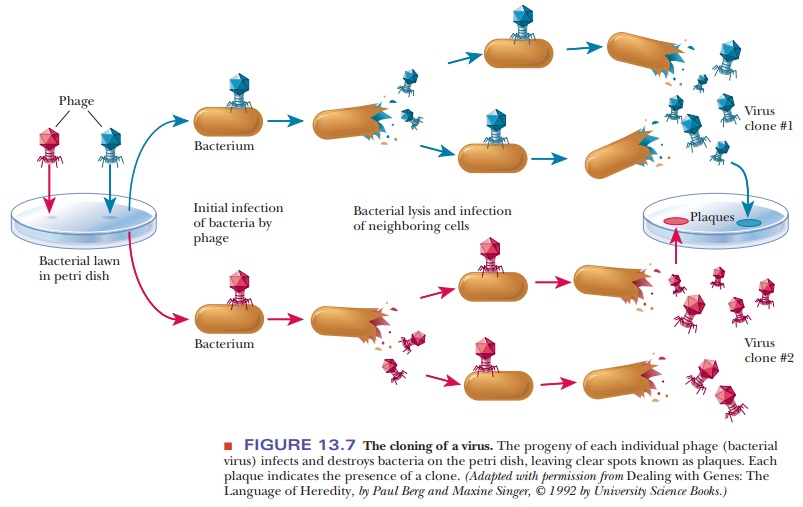 DNA molecules containing covalently linked segments derived from two or more DNA sources are called recombinant DNA. (Another name for recombinant DNA is chimeric DNA, named after the chimera, a monster in Greek mythology that had the head of a lion, the body of a goat, and the tail of a serpent.) The production of recombinant DNA was made possible by the isolation of restriction endonucleases.

If samples of DNA from two different sources are digested with the same restriction enzyme and then mixed, in some cases the sticky ends that anneal to one another are from different sources. The nicks in the covalent structure can be sealed with DNA ligases, producing recombinant DNA (Figure 13.6).

Unfortunately, when two different kinds of DNA are combined using restric-tion enzymes and DNA ligase, relatively few product molecules are collected. Further experiments with the DNA will require large amounts to work with, and this is made possible by inserting the DNA into a viral or bacterial source. The virus is usually a bacteriophage; the bacterial DNA typically is derived from a plasmid, a small circular DNA molecule that is not part of the main circu-lar DNA chromosome of the bacterium. Using DNA from a viral or bacterial source as one of the components of a recombinant DNA enables scientists to take advantage of the rapid growth of viruses and bacteria and to obtain greater amounts of the recombinant DNA. This process of making identical copies of DNA is called cloning.

The term clone refers to a genetically identical population, whether of organisms, cells, viruses, or DNA molecules. Every member of the population is derived from a single cell, virus, or DNA molecule. It is particularly easy to see how individual bacteriophages and bacterial cells can produce large numbers of progeny. Bacteria grow rapidly, and large populations can be obtained relatively easily under laboratory conditions. Viruses also grow easily. We shall examine each of these examples in turn.

A virus can be considered a genome with a protein coat, usually consisting of many copies of one kind of protein or, at most, a small number of different kinds of proteins. The viral genome can be double-stranded or single-stranded DNA or RNA. For purposes of this discussion, we confine our attention to DNA viruses with double-stranded DNA. In the cloning of bacteriophages, a “lawn” of bacteria covering a petri dish is infected with the phage. Each individual virus infects a bacterial cell and reproduces, as do its progeny when they infect and destroy other bacterial cells. As the virus multiplies, a clear spot, called a plaque, appears on the petri dish, marking the area in which the bacterial cellshave been killed (Figure 13.7). The plaque consists of the progeny viruses that are clones of the original. 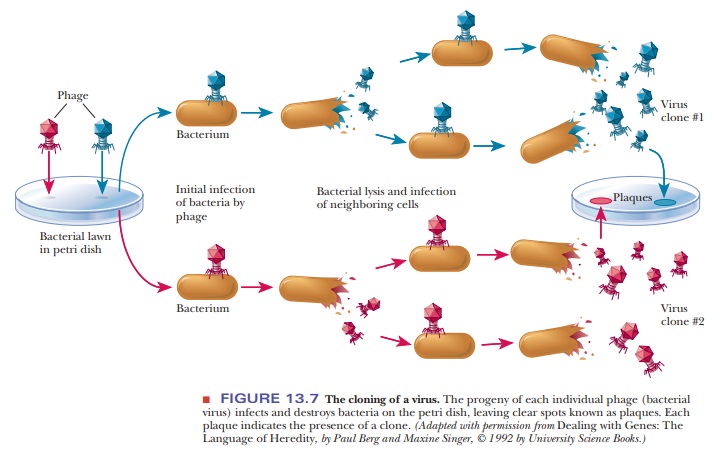 To clone individual cells, whether from a bacterial or a eukaryotic source, a small number of cells is spread thinly over a suitable growth medium in a dish. Spreading the cells thinly ensures that each cell will multiply in isolation from the others. Each colony of cells that appears on the dish will then be a clone derived from a single cell (Figure 13.8). Because large quantities of bacteria and bacte-riophages can be grown in short time intervals under laboratory conditions, it is useful to introduce DNA from a larger, slower-growing organism into bacteria or phages and to produce more of the desired DNA by cloning. If, for example, we want to take a portion of human DNA, which would be hard to acquire, and clone it in a virus, we can treat the human DNA and the virus DNA with the same restriction endonuclease, mix the two, and allow the sticky ends to anneal. If we then treat the mixture with DNA ligase, we have produced recombinant DNA. To clone it, we incorporate the chimeric DNA into virus particles by adding viral coat protein and allowing the virus to assemble itself. The virus particles are spread on a lawn of bacteria, and the cloned segments in each plaque can then be identi-fied (Figure 13.9). The bacteriophage is called a vector, the carrier for the gene of interest that was cloned. The gene of interest is called many things, such as the “foreign DNA,” the “insert,” “geneX,” or even “YFG,” for “your favorite gene.” 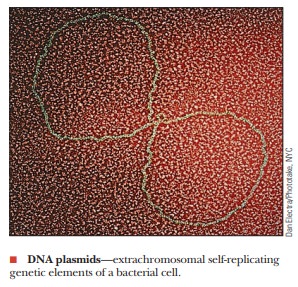 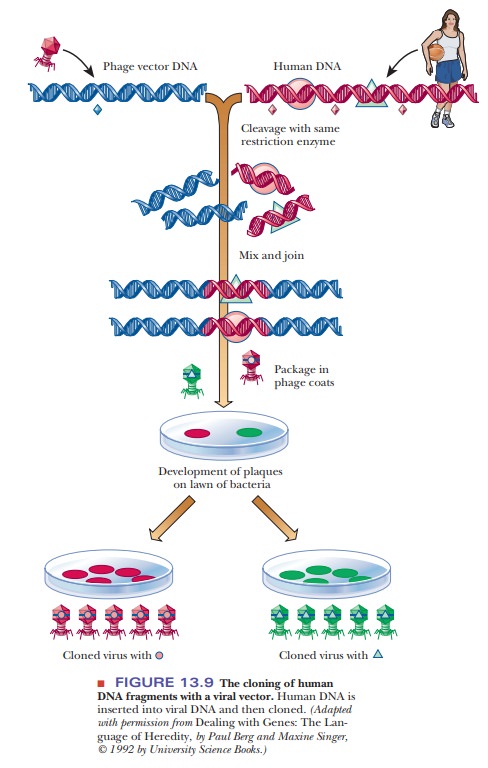 This DNA, which usually exists as a closed circle, replicates independently of the main bacterial genome and can be transferred from one strain of a bacterial species to another by cell-to-cell contact. The foreign gene can be inserted into the plasmid by the successive actions of restriction endonucleases and DNA ligase, as was seen in Figure 13.6. When the plasmid is taken up by a bacterium, the DNA insert goes along for the ride (Figure 13.10). The bacteria that contain the DNA insert can then be grown in fermentation tanks under conditions that allow them to divide rapidly, amplifying the inserted gene many thousandfold.

While the theory of cloning DNA into a plasmid is straightforward, there are several considerations for a successful experiment. When bacteria take up a plasmid, we say they have been transformed. Transformation is the process whereby new DNA is incorporated into a host. Bacteria are encouraged to take up foreign DNA by a couple of methods. One is to heat-shock the bacteria at 42°C, followed by placing them on ice. Another is to place them in an electric field, a technique called electroporation.

How are we to know which of the bacteria have taken up the plasmid? Because bacteria divide quickly, we would not want all the bacteria to grow-rather, only the ones that have the plasmid. This process is called selection. Each plasmid chosen for cloning must have some type of selectable marker that lets us know that the growing bacterial colonies contain the plasmid. These markers are usually genes that confer resistance to antibiotics. After transformation, the bacteria are plated on a medium containing the antibiotic to which the plas-mid carries resistance. 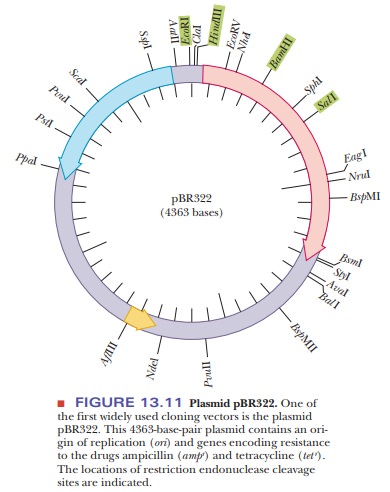 In that way, only the bacteria that took up the plasmids will grow (Figure 13.10). One of the first plasmids used for cloning is pBR322 (Figure 13.11). This simple plasmid was created from a naturally occurring one found in E. coli. Like all plasmids, it has an origin of replication, so it can rep-licate independently of the rest of the genome. It has genes that confer resis-tance to two antibiotics, tetracycline and ampicillin. The genes are indicated tet rand ampr. The pBR322 plasmid has several restriction enzyme sites. Thenumber and location of restriction sites is very important to a cloning experi-ment. The foreign DNA must be inserted at unique restriction sites so that the use of restriction enzymes opens up the plasmid at only one point. Also, if the restriction site chosen is inside one of the selection markers, the resistance to the antibiotic is lost upon insertion of the foreign DNA. This was, in fact, the original way selection was done with plasmids. Foreign DNA was inserted using restriction sites in the tetr gene. Selection was achieved by noting the loss of the ability of bacteria to grow on a medium containing tetracycline.

One of the early stumbling blocks to cloning was finding the right plasmid, one that had restriction sites that matched those enzymes needed to cut out the foreign DNA. As the technology to design plasmids improved, they were created with regions that had many different restriction sites in a small space. This region was called a multiple cloning site (MCS) or a polylinker (Figure 13.12). A popular cloning vector series is based on the pUC plasmids (Figure 13.13). The acronym pUC stands for universal cloning plasmid. Each of these cloning vectors has an extensive MCS, which helps solve another problem with cloning-the directionality of the inserted DNA. 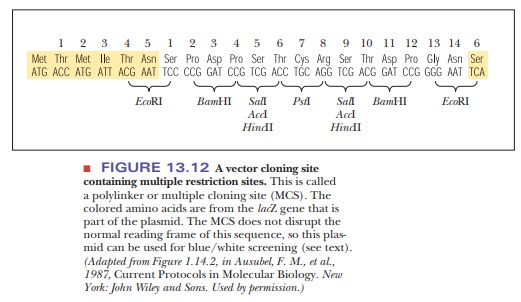 Depending on what is to be done with the cloned DNA, controlling its orientation in the vector may be important. If only one restriction enzyme is used, such as BamH1, then the foreign DNA can enter the plasmid in either of two directions. However, if the foreign DNA is cut out of its source at one end with BamH1 and at the other end with HindIII, and if these same two restriction enzymes are used to open up the plasmid, then the ends match in only one direction (Figure 13.13). 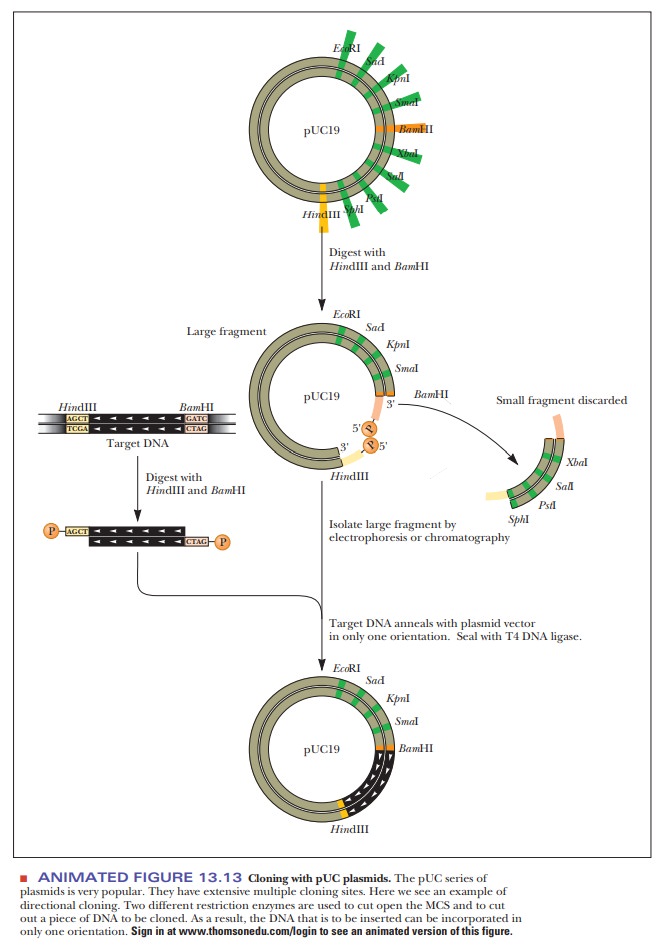 The use of the pUC plasmids also aids in the selection procedure. The older plasmids that were based on pBR322 had the shortcoming that the foreign DNA was inserted into the tetracycline resistance gene. This meant that the only way to spot bacteria that had taken up a plasmid that had also taken up the insert was that the bacteria would not grow on a medium containing tet-racycline. This lack of growth by the successful clone made it challenging to go back and find the proper bacterial colonies. The pUC plasmids, however, have a characteristic that alleviates this procedure-they contain the lacZ gene, which is the basis for a selection technique called blue/white screening. The lacZ gene codes for theα-subunit of the enzymeβ-galactosidase, which is used to cleave disaccharides, such as lactose. 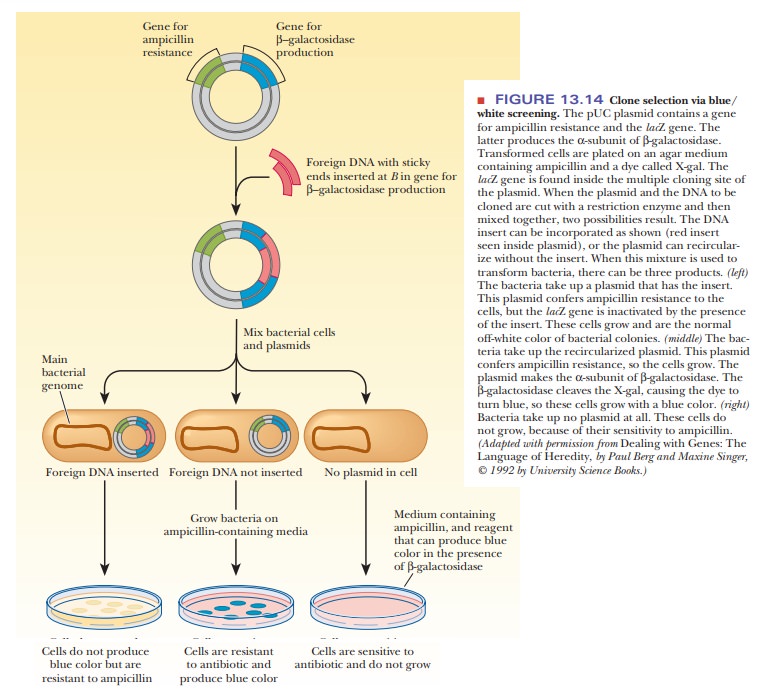 The MCS is located inside the lacZ gene, so that, when foreign DNA is inserted, it inactivates the gene. Figure 13.14 shows how this characteristic is useful. The pUC plasmid is cut open in its MCS by restriction enzymes, and the foreign DNA (red) is cut out of its source with the same enzymes. These are then combined and joined together with DNA ligase to yield two products in the ligation reaction. The desired product is the plasmid that now contains the foreign DNA. The other is a plasmid that has reclosed upon itself without the inserted DNA. This type is much less common when two different restriction enzymes are used to open the plasmid, but it still occurs infrequently. When this mixture is used to trans-form the bacteria, there are three possible products: (1) bacteria that took up the plasmid with the insert, (2) bacteria that took up the plasmid without the insert, and (3) bacteria that took up no plasmid at all. The mixture of bacteria from the transformation is plated on a medium containing ampicillin and a dye, such as X-gal. β-Galactosidase hydrolyzes a bond in the X-gal molecule, turning it blue. The bacteria to be transformed are mutants that make a defec-tive version of the β-galactosidase that lacks the α-subunit. If the bacteria take up no plasmid at all, they lack the ampicillin-resistance gene and do not grow. If the bacteria take up a plasmid lacking the insert, they have a functional lacZ gene and produce the α-subunit of β-galactosidase. These colonies produce active β-galactosidase, which cleaves the dye, X-gal. These colonies grow with a blue color. If the bacteria take up a plasmid that contains the insert, the lacZ gene is inactivated. These colonies are the off-white color of normal bacterial colonies on agar.

DNA can be combined by using restriction enzymes that create sticky ends in the DNA. This recombinant DNA has a target DNA sequence that the experimenter is interested in.

The target DNA sequence is carried in some type of vector, usually a bac-terial plasmid or a virus.

Organisms that are carrying the target DNA are identified through a pro-cess called selection. Selection often involves antibiotic resistance.