RNA interference (RNAi) was first discovered in a nematode worm (Caenorhabditis elegans). Double-stranded RNA (dsRNA) was found to cause gene silencing in a sequence-specific way.

RNA interference (RNAi) was first discovered in a nematode worm (Caenorhabditis elegans). Double-stranded RNA (dsRNA) was found to cause gene silencing in a sequence-specific way.

Researchers had long thought that RNA would be the perfect way to control gene expression, because the right sequence of RNA should bind to DNA and interfere with its transcription. While checking on the efficiency of antisense RNA as a suppressor of gene expression, researchers discovered that dsRNA was more than 10 times as effective at shutting off transcription of a gene. In addition, suppression by RNAi was shown to be transmissible to other cells of the organism and to the progeny in C. elegans. RNAi has since been found as a natu-ral phenomenon in plants as a way of targeting viral RNAs for destruction. It has also been seen in Drosophila and, most recently, in mammals. It is now believed that RNAi is a natural regulatory mechanism for controlling gene expression. It may also be a pro-tection mechanism against oncogenes that produce too much of a harmful product.

The process starts with an enzyme that is a member of the RNase III class, called Dicer. This enzyme binds to dsRNA and cleaves it into small interfering RNA (siRNA) of between 22 and 25 nucleotides, as shown in the figure.

The siRNAs then bind to a protein complex called RNA-induced silencing complex (RISC). The siRNA–RISC complex then binds to target mRNAthat has the same sequence as part of the siRNA and degrades it. In this way, the sequence of the dsRNA controls the degrada-tion of an mRNA target. We are still learning how this may have arisen naturally. Perhaps an endogenous RNA-dependent RNA polymerase senses that too much of a particular mRNA is being made. It could then create the opposite strand, thereby forming the dsRNA. This would then trigger the eventual destruction of the mRNA. The same logic could apply to a defense mechanism against viruses. 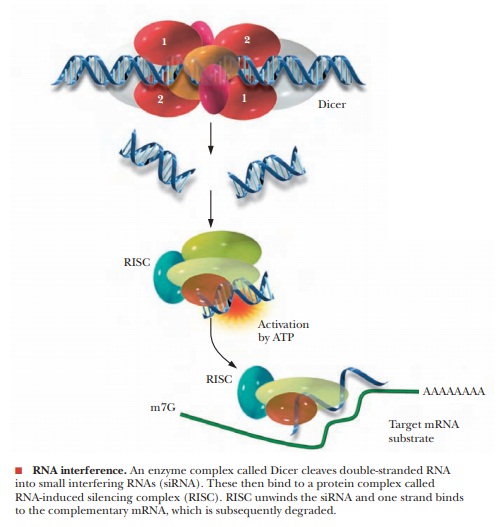 Regardless of RNAi’s natural purpose, it has become the fastest-growing new field in molecular biology. Many companies have sprung up overnight that produce RNAi kits and dsRNAs to use to initiate reactions. The technique is quickly becoming the newest way to knock out specific genes to see what then happens to the organism. All it takes is a knowledge of the gene sequence, and the correct dsRNA can then be used to produce siRNAs to shut off the gene. Researchers using RNAi have been better able to map the thousands of genes in certain organisms, such as C. elegans. As an example of the power of the technique, researchers just mapped the gene for an enzyme involved in the metabolism of vitamin K. This enzyme, vitamin K epoxide reduc-tase (VKOR), is the target of a widely prescribed anticoagulant.The enzyme has been known for 40 years, but attempts to purify it and locate it on the human chromosome had met with no success. Using information from the Human Genome Project, researchers were able to map human chromosomes and to come up with 13 genes that had characteristics that could mean that they were the VKOR gene. Using RNAi, the correct one was iso-lated in a few weeks, a major breakthrough for researchers that had been studying this enzyme for decades.

Medical researchers are very hopeful about the possibilities for this technique. Given the specificity of RNAi, mutant alleles that are the basis of diseases could be knocked out with the right sequence of dsRNA given as a trigger for the Dicer enzyme to pro-cess. For example, if one allele is mutated but the other is normal, RNAi could knock out the mutated one while not affecting the normal one.