Molecular biologists have taken the idea one step further and have incorporated affinity chromatography ligand-binding sites directly into a protein to be expressed.

Affinity chromatography was introduced as an example of a powerful technique for protein purification. Molecular biologists have taken the idea one step further and have incorporated affinity chromatography ligand-binding sites directly into a protein to be expressed. A protein is created that contains not only the amino acid sequence of the desired polypeptide but also some extra amino acids at the N-terminus or C-terminus. These new proteins are called fusion proteins. The figure indicates how this might work. An expression vector that has a promoter for T7 polymerase, followed by a start sequence ATG, is used. A his-tag sequence that follows the ATG codes for six histidine residues. Following the his-tag is a sequence that is specific for a proteolytic enzyme called enterokinase. Finally comes the MCS, where the gene of interest can be cloned. After the desired gene is cloned into this vector, it is transformed into bacteria and expressed. 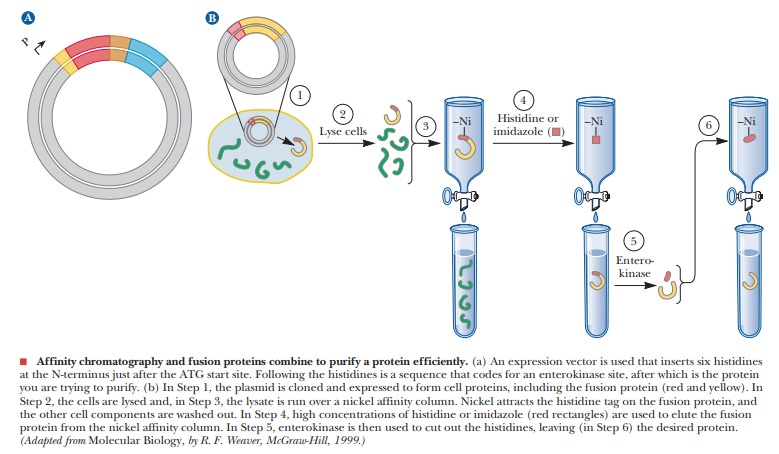 The fusion proteins that are translated have the initial methionine, six histidines, the enterokinase-specific amino acid sequence, and then the desired protein. This technique is used with a his-tagged fusion protein. A nickel affinity column is set up, which is very specific for histidine residues. The cells are lysed and passed over the column. All the proteins pass through except the fusion protein, which binds tightly to the nickel column. The fusion protein can be eluted with imidazole, a histidine analog. Enterokinase is then added to cleave off the his-tag, leaving the desired protein. Under ideal circumstances, this can be an almost perfect, one-step purification of the protein.