Genetic engineering techniques have made it possible to prepare many proteins with the amino acid sequences found in humans.

Genetic engineering techniques have made it possible to prepare many proteins with the amino acid sequences found in humans. This is done by isolating the gene that encodes the protein and then incorporating the gene into a bacterium or into eukaryotic cells grown in tissue culture. Recent work in the cloning of cows and sheep has been justified in part as a potential source of human proteins that might be produced in the animals’ milk. In the process of establishing systems for the commercial production of any protein product, it is always easier to isolate and purify the proteins if they are present in the extracellular fluid surrounding the cells that produced them.

Frequently, bacterial systems are used to produce human proteins. Bacteria are very cheap to grow and easy to work with. Experimental systems using eukaryotic cells are much more difficult and expensive, in spite of the fact that eukaryotic cells offer the advantage of being able to add sugar residues to glyco-proteins and perhaps help the proteins fold into their biologi-cally active conformations. Still, using bacteria and recombinant DNA for protein production has its complications. Growing pro-teins in bacteria requires the addition of the Shine–Dalgarno sequence  to the mRNA to ensure its binding to the ribosome. The genetic manipulations necessary to make the product in a foreign host often result in a protein that is slightly modified, usually by having a few extra amino acids on the N-ter-minus. The presence of the extra amino acids complicates the process of approval by the FDA, because there is more concern about side effects.

Some notable successes in human protein production include the following:

Insulin (see text) is traditionally isolated from horses and swine, and it has been used to treat type I diabetes melli-tus. However, after many years of use, about 5% of diabetics develop a severe allergy to the foreign protein. These peo-ple can now be treated with bacteria-derived human insulin, which costs only about 10% more than the animal-derived hormones. 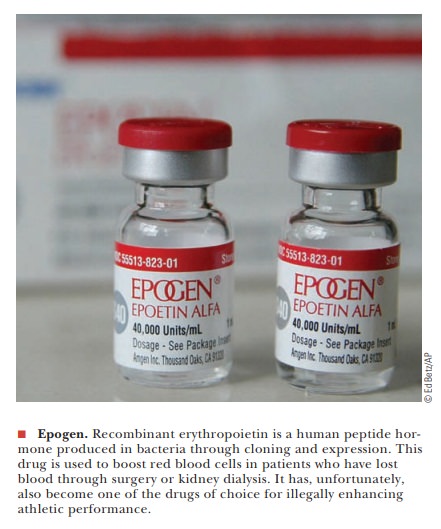 In the past, human growth hormone (HGH) has been obtained only by extraction from the pituitary glands of cadavers, a practice that carries the risk of the cells being contaminated with HIV or other diseases. HGH is used for therapy in genetic dwarfs and for muscle-wasting diseases, including AIDS. HGH is a relatively large protein hormone, with more than 300 amino acids, but it is a simple protein with no sugar residues, so it was relatively easy to clone into bacte-ria. It is interesting to note that the availability of increased amounts of safe HGH has resulted in the emergence of a black market in the sale of the hormone for muscle building in athletes.

Two proteins, tissue plasminogen activator (TPA) and entero-kinase (EK), are known to dissolve blood clots. If they are injected into the body within a critical period after a heart attack or stroke, either of these two proteins can prevent or minimize the disastrous effects of blood clots in the heart or brain. Without genetic recombination, enough of these proteins would never be available for this treatment to be of practical use. Currently, two different companies are produc-ing the two proteins.

Erythropoietin (EPO) is a hormone that stimulates the bone marrow to produce erythrocytes, commonly referred to as red blood cells (RBCs). This relatively small protein is lost during kidney dialysis; a healthy kidney also filters this hor-mone from the blood but then reabsorbs it back into the body. People with chronic kidney failure who are on dialysis while awaiting a kidney transplant thus suffer an additional problem of being chronically anemic from having too few RBCs. Such individuals must receive regular blood transfu-sions, which carries the risk of disease and possible allergic reaction. A genetically engineered erythropoietin, Epogen, is now available from Amgen; it is the most commercially suc-cessful example of a human hormone coming from genetic research. EPO is also one of the most successful examples of a recombinant protein that has had its original purpose sub-verted. Because some endurance athletes have used EPO to boost their levels of RBCs, giving them a big advantage over their competitors, a black market for EPO now exists in the sports industry. The situation came to a head during the 1998 Tour de France when a team doctor was arrested crossing the border into France while carrying countless vials of EPO. The EPO was eventually traced to a theft from a hospital. The team was ejected from the race, and the international govern-ing body of cycling has invested hundreds of thousands of dollars to combat EPO usage, including developing an assay for recombinant EPO.