When an apple is cut, it turns brown after sometime.

When an apple is cut, it turns brown after sometime. Do you know the reason behind this colour change? It is because of a chemical reaction called oxidation. We come across oxidation reactions in our daily life. For example 1) burning of LPG gas 2) rusting of iron 3) Oxidation of carbohydrates, lipids, etc. into CO2 and H2O to produce energy in the living organisms.

Both these reactions are redox reactions as per the classical concept.

In the first reaction which is responsible for the rusting of iron, the oxygen adds on to the metal, iron. In the second reaction, hydrogen is removed from Hydrogen sulphide (H2S). Identity which species gets reduced.

Consider the following two reactions in which the removal of oxygen and addition of hydrogen take place respectively. These reactions are called redox reactions.

It is defined as the imaginary charge left on the atom when all other atoms of the compound have been removed in their usual oxidation states that are assigned according to set of rules. A term that is often used interchangeably with oxidation number is oxidation state

1) The oxidation state of a free element (i.e. in its uncombined state) is zero.

2) For a monatomic ion, the oxidation state is equal to the net charge on the ion.

Example : The oxidation number of sodium in Na+ is +1.

The oxidation number of chlorine in Cl – is –1.

3) The algebric sum of oxidation states of all atoms in a molecule is equal to zero, while in ions, it is equal to the net charge on the ion.

4) Hydrogen has an oxidation number of +1 in all its compounds except in metal hydrides where it has – 1 value.

Oxidation number of hydrogen in hydrogen chloride (HCl) is + 1.

Oxidation number of hydrogen in sodium hydride (NaH) is –1.

5) Fluorine has an oxidation state of – 1 in all its compounds.

6) The oxidation state of oxygen in most compounds is –2. Exceptions are peroxides, super oxides and compounds with fluorine. 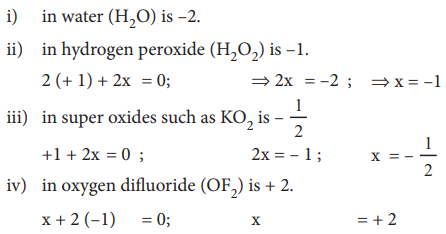 Calculation of oxidation number using the above rules. 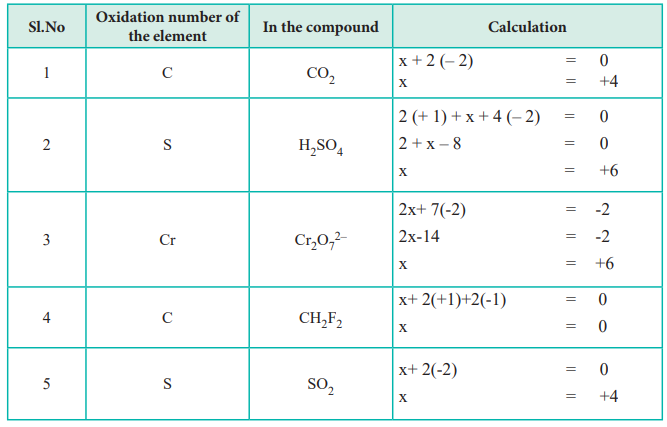 Redox reactions are classified into the following types.

Redox reactions in which two substances combine to form a single compound are called combination reaction.

Place a zinc metal strip in an aqueous copper sulphate solution taken in a beaker. Observe the solution, the intensity of blue colour of the solution slowly reduced and finally disappeared.

The zinc metal strip became coated with brownish metallic copper. This is due to the following metal displacement reaction. 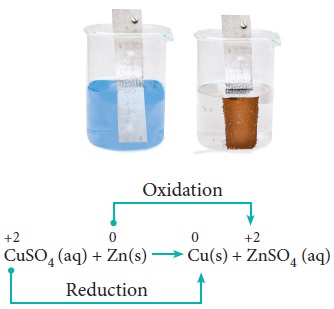 In some redox reactions, the same compound can undergo both oxidation and reduction. In such reactions, the oxidation state of one and the same element is both increased and decreased. These reactions are called disproportionation reactions. 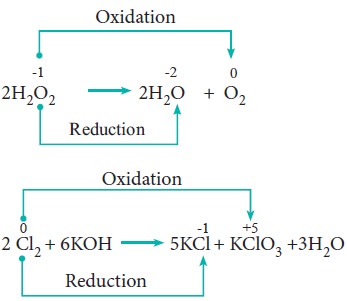 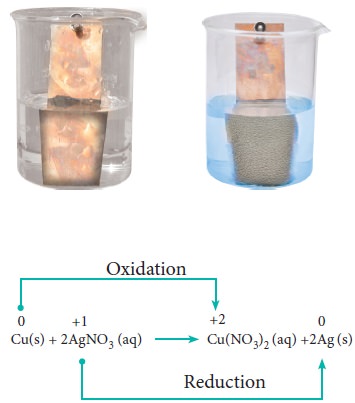 It indicates that between copper and silver, copper has the tendency to release electrons and silver to accept electrons.

From the above experimental observations, we can conclude that among the three metals, namely, zinc, copper and silver, the electron releasing tendency is in the following order.

This kind of competition for electrons among various metals helps us to design (galvanic) cells. In XII standard we will study the galvanic cell in detail.

Balancing (the Equation) of Redox Reactions

The two methods for balancing the equation of redox reactions are as follows.

In this method, the number of electrons lost or gained in the reaction is calculated from the oxidation numbers of elements before and after the reaction. Let us consider the oxidation of ferrous sulphate by potassium permanganate in acid medium. The unbalanced chemical equation is,

a. The oxidation number of Mn in KMnO4 changes from +7 to +2 by gaining five electrons.

b. The oxidation number of Fe in FeSO4 changes from +2 to +3 by loosing one electron.

Now, based on the reactant side, balance the products (ie oxidised and reduced).The above equation becomes

Step 4 Balance the other elements except H and O atoms. In this case, we have to balance K and S atoms but K is balanced automatically.

Therefore the difference 8-S atoms in reactant side, has to be balanced by multiplying H2SO4 by '8' The equation now becomes,

Therefore, multiply H2O molecules in the product side by '8'

The oxygen atom is automatically balanced. This is the balanced equation.

This method is used for ionic redox reactions.

Using oxidation number concept, find out the reactants which undergo oxidation and reduction.

Write two separate half equations for oxidation and reduction reaction,

Let us consider the same example which we have already discussed in oxidation number method.

The ionic form of this reaction is,

The two half reactions are,

Balance the atoms and charges on both sides of the half reactions.

Addition of two half reactions gives the balanced equation represented by equation (6).