Earlier, we learnt that the stoichiometry concept is useful in predicting the amount of product formed in a given chemical reaction.

Earlier, we learnt that the stoichiometry concept is useful in predicting the amount of product formed in a given chemical reaction. If the reaction is carried out with stoichiometric quantities of reactants, then all the reactants will be converted into products. On the other hand, when a reaction is carried out using non-stoichiometric quantities of the reactants, the product yield will be determined by the reactant that is completely consumed. It limits the further reaction from taking place and is called as the limiting reagent. The other reagents which are in excess are called the excess reagents.

Recall the analogy that we used in stoichiometry concept i.e. kesari preparation,

As per the recipe requirement, 2 cups of sugar are needed for every cup of rava. Consider a situation where 8 cups of sugar and 3 cups of rava are available (all other ingredients are in excess), as per the cooking recipe, we require 3 cups of rava and 6 cups of sugar to prepare 18 cups of kesari. Even though we have 2 more cups of sugar left, we cannot make any more quantity of Kesari as there is no rava available and hence rava limits the quantity of Kesari in this case. Extending this analogy for the chemical reaction in which three moles of sulphur are allowed to react with twelve moles of fluorine to give sulfur hexafluoride.

As per the stoichiometry,

Urea, a commonly used nitrogen based fertilizer, is prepared by the reaction between ammonia and carbon dioxide as follows.

1. If the entire quantity of all the reactants is not consumed in the reaction

which is the limiting reagent ?

The balanced equation is

= number of moles of urea formed × molar mass of urea

Excess reagent leftover at the end of the reaction is carbon dioxide.

= number of moles of CO2 left over × molar mass of CO2 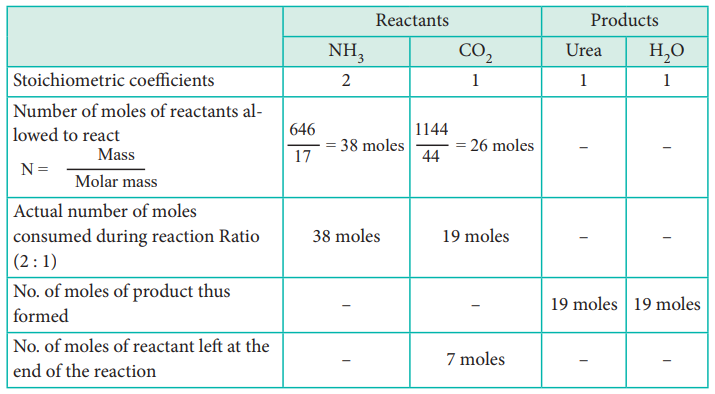