How much does an individual atom weigh?

How much does an individual atom weigh? As atoms are too small with diameter of 10–10 m and weigh approximately 10–27 kg, it is not possible to measure their mass directly. Hence it is proposed to have relative scale based on a standard atom.

The C-12 atom is considered as standard by the IUPAC (International Union of Pure and Applied Chemistry), and it's mass is fixed as 12 amu (or) u. The amu (or) unified atomic mass is defined as one twelfth of the mass of a Carbon-12 atom in its ground state. 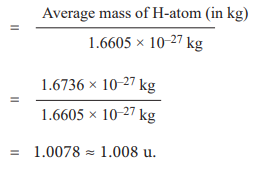