Often we use special names to express the quantity of individual items for our convenience.

Often we use special names to express the quantity of individual items for our convenience. For example, a dozen roses means 12 roses and one quire paper means 25 single sheets. We can extend this analogy to understand the concept of mole that is used for quantifying atoms and molecules in chemistry. Mole is the SI unit to represent a specific amount of a substance.

To understand the mole concept, let's calculate the total number of atoms present in 12 g of carbon -12 isotope or molecules in 158.03 g of potassium permanganate and 294.18 g of potassium dichromate.

Table 1.2 Calculation of number of entities in one mole of substance. 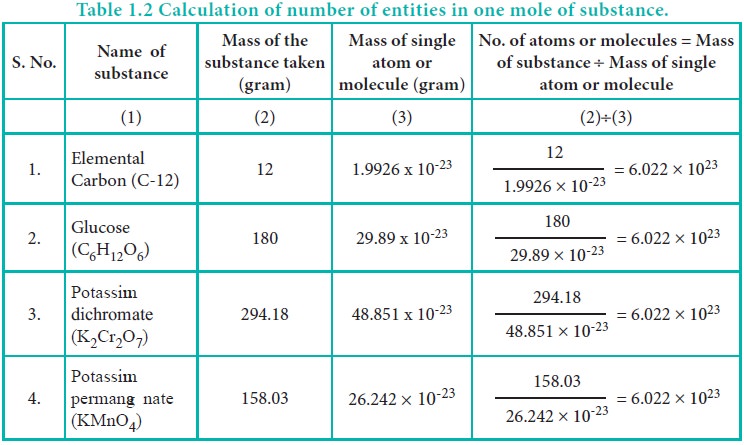 From the calculations we come to know that 12 g of carbon-12 contains 6.022x1023 carbon atoms and same numbers of molecules are present in 158.03 g of potassium permanganate and 294.18 g of potassium dichromate. Similar to the way we use the term ‘dozen’ to represent 12 entities, we can use the term ‘mole’ to represent 6.022 x 1023 entities (atoms or molecules or ions)

The total number of entities present in one mole of any substance is equal to 6.022 x 1023. This number is called Avogadro number which is named after the Italian physicist Amedeo Avogadro who proposed that equal volume of all gases under the same conditions of temperature and pressure contain equal number of molecules. Avogadro number does not have any unit.

In a chemical reaction, atoms or molecules react in a specific ratio. Let us consider the following examples

He is known for the Avogadro's hypothesis. In honour of his contributions, the number of fundamental particles in a mole of substance was named as Avogadro number. Though Avogadro didn't predict the number of particles in equal volumes of gas, his hypothesis did lead to the eventual determination of the number as 6.022 x 1023 Rudolf Clausius, with his kinetic theory of gases, provided evidence for Avogadro's law.

Molar mass is defined as the mass of one mole of a substance. The molar mass of a compound is equal to the sum of the relative atomic masses of its constituents expressed in g mol-1.

The volume occupied by one mole of any substance in the gaseous state at a given temperature and pressure is called molar volume. 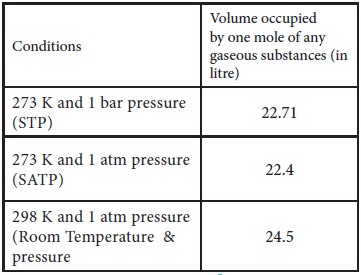