In this unit, we are exposed to, • The two aspects of treating light as a ray and a wave. • The behaviour and propagation of light. • The concepts related to mirrors, lenses, prisms etc. • The different optical instruments like microscope, telescope etc. • The terms like magnification and resolving power etc. • The various phenomena that support the wave nature of light.

An age is called dark, not because the light fails to shine, but because people refuse to see.

There are two ways of spreading light: to be the candle or the mirror that reflects it.

In this unit, the students are exposed to,

• The ray aspect of light.

• The phenomenon of reflection and refraction of light.

• The determination of speed of light.

• The different phenomena like dispersion and scattering of light.

• The two aspects of treating light as a ray and a wave.

• The behaviour and propagation of light.

• The various phenomena that support the wave nature of light. 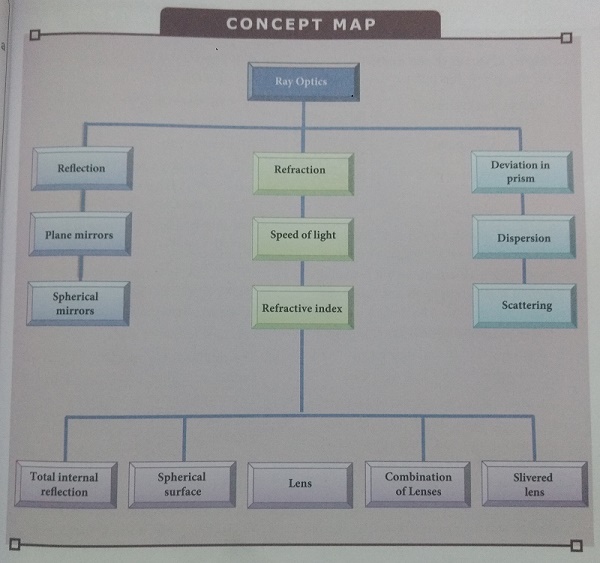 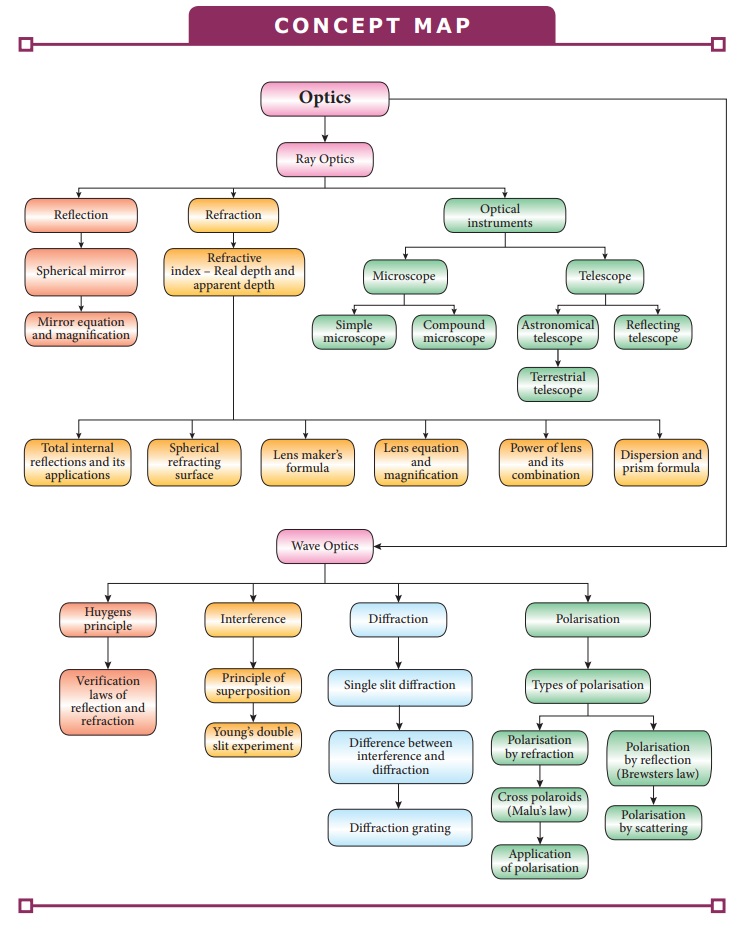 Light is mystical. Yet, its behaviour is so fascinating. It is difficult to comprehend light to a single entity. In this unit, we learn it in two different scientific aspects called ray optics and wave optics. Ray optics deals with light that is represented as a ray travelling in straight lines. Here, the geometrical constructs get the permanence to understand some of the characteristics of light and the phenomena associated with it. There are several other phenomena which can only be explained using wave optics, which we study in the next Unit. There is also a quantum aspect of light which we can study as quantum optics in graduate level courses.

Light travels in a straight line in a medium. Light may deviate in its path only when it encounters another medium or an obstacle.

The bouncing back of light into the same medium when it encounters a reflecting surface is called reflection of light. Polished surfaces can reflect light. Mirrors which are silver coated at their back can reflect almost 90% of the light falling on them. The angle of incidence i and the angle of reflection r are measured with respect to the normal drawn to the surface at the point of incidence of light. According to law of reflection,

(a) The incident ray, reflected ray and normal to the reflecting surface all are coplanar (ie. lie in the same plane).

The law of reflection is shown in Figure 6.1. 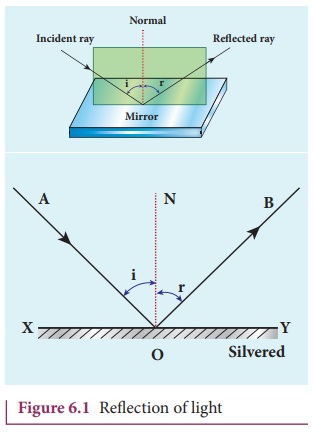 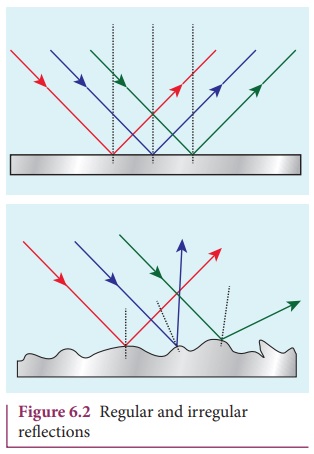 Angle of deviation due to reflection 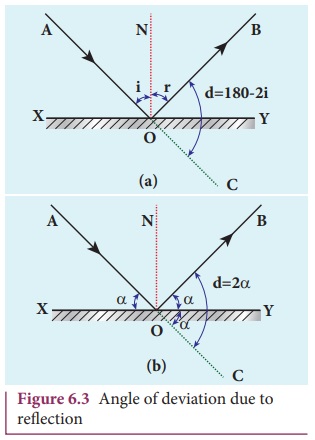 For the reflecting surface AB, the incident ray IO and the reflected ray OR1 subtend angle i with the normal N as angle of incidence is equal to angle of reflection as shown in figure .

When the surface AB is tilted to A’B’ by an angle θ, the normal N ‘ is also is tilted by the same angle θ. Remember the position of incident ray IO remains unaltered. But, in the tilted system the angle of incidence is now i+θ and the angle of reflection is also i+θ. Now, OR2 is the reflected ray. The angle between OR2 and OR1 is, 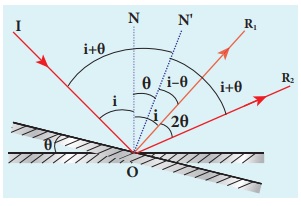 Another ray AD incident normally on the mirror at D is reflected back along DA. When BO and AD are extended backwards, they meet at a point A’ . Thus, the rays appear to come from a point A’ which is behind the plane mirror. The object and its image in a plane mirror are at equal perpendicular distances from the plane mirror which can be shown by the following explanation.

In Figure 6.4, Angle ∠AON = angle ∠DAO [Since they are alternate angles]

The triangles ∆ODA and ∆ODA’ are congruent

Characteristics of the image formed by plane mirror

(i) The image formed by a plane mirror is virtual, erect, and laterally inverted.

(iii) The image distance far behind the mirror is equal to the object distance in front of it.

(iv) If an object is placed between two plane mirrors inclined at an angle θ, then the number of images n formed is as,

Real and virtual images by a plane mirror

When a real object is placed at a point O in front of a plane mirror it produces divergent rays in all directions as shown in Figure 6.5(a). After reflection from the plane mirror they appear to come out from a point I behind the mirror. This image cannot be formed on a screen as the image is behind the mirror. This type of image which cannot be formed on the screen but can only be seen with the eyes is called virtual image.

On the other hand, if convergent rays are incident on a plane mirror, the rays after reflection pass through a point I in front of the mirror and form an image as shown in Figure 6.5(b). This image can be formed on a screen as the image is in front of the mirror. This type of image which canbe formed on a screen and can also be seen with the eyes is called real image. 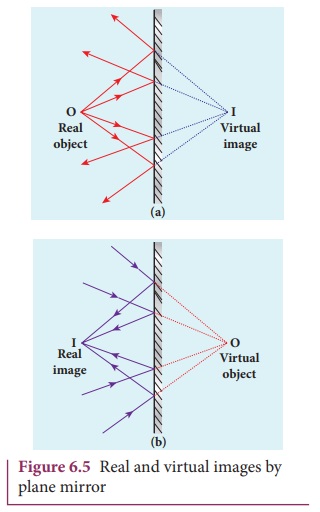 The above discussion is consolidated in Table 6.1. These concepts will be very much useful in deciding about the nature of object and image in ray optics.

Table 6.1 Conditions for nature of objects and images 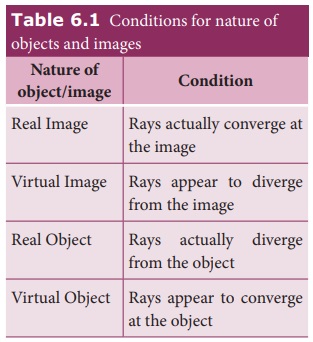 Virtual Image: Rays appear to diverge from the image

Virtual Object: Rays appear to converge at the object

What is the height of the mirror needed to see the image of a person fully on the mirror? 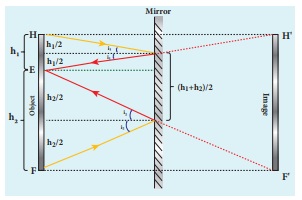 Does the height depend on the distance between the person and the mirror?