The terminologies of spherical mirrors also hold good very much for thin lens except for focal length.

As the thin lens is formed by two spherical surfaces, the lens may separate two different media. i.e. the media to the left and right of the lens may be different. Hence, we have two focal lengths. 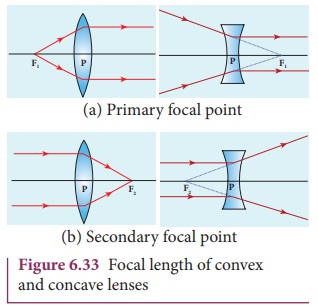 The primary focus F1 is defined as a point where an object should be placed to give parallel emergent rays to the principal axis as shown in Figure 6.33(a). For a convergent lens, such an object is a real object and for a divergent lens, it is a virtual object. The distance PF1 is the primary focal length f1.

If the media on the two sides of a thin lens have same refractive index, then the two focal lengths are equal. We will mostly be using the secondary focus F2 in our further discussions.

The sign conventions for thin lenses differ only in the signs followed for focal lengths.

(b) The focal length of the thin lens is taken as positive for a converging lens and negative for a diverging lens.

The other sign conventions for object distance, image distance, radius of curvature, object height and image height (except for the focal lengths as mentioned above) remain the same for thin lenses as that of spherical mirrors. 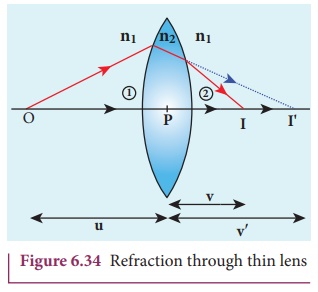 respectively and P be the pole as shown in figure 6.34. Consider a point object O on the principal axis. The ray which falls very close to P, after refraction at the surface

forms image at I'. Before it does so, it is again refracted by the surface

. Therefore the final image is formed at I.

The general equation for the refraction at a spherical surface is given from Equation (6.59),

For the refracting surface

For the refracting surface 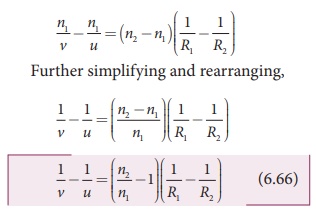 If the object is at infinity, the image is formed at the focus of the lens. Thus, for u = ∞, v = f. Then the equation becomes.

The above equation is called the lens maker’s formula, because it tells the lens manufactures what curvature is needed to make a lens of desired focal length with a material of particular refractive index. This formula holds good also for a concave lens. By comparing the equations (6.66) and (6.67) we can write,

This equation is known as lens equation which relates the object distance u and image distance v with the focal length f of the lens. This formula holds good for a any type of lens.

Let us consider an object OO' of height h1 placed on the principal axis with its height perpendicular to the principal axis as shown in Figure 6.35. The ray OP passing through the pole of the lens goes undeviated. The inverted real image II ‘ formed has a height h2. 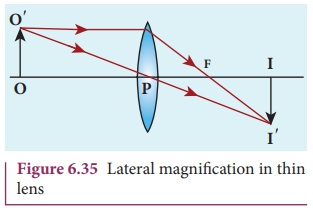 The lateral or transverse magnification m is defined as the ratio of the height of the image to that of the object.

From the two similar triangles ∆POO’ and ∆ PII ‘ , we can write,

Substituting this in the equation (6.70) for magnification,

A biconvex lens has radii of curvature 20 cm and 15 cm each. The refractive index of the material of the lens is 1.5. What is its focal length? Will the focal length change if the lens is flipped by the side?

For a biconvex lens, radius of curvature of the first surface is positive and that of the second surface is negative side as shown in the figure. 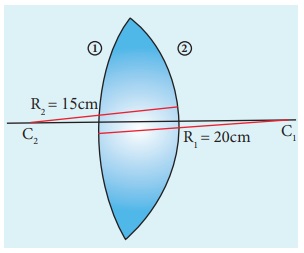 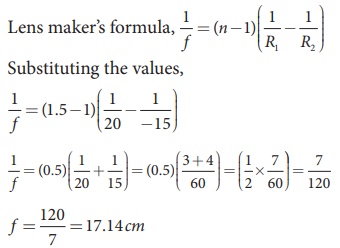 As the focal length is positive the lens is a converging lens.

If the lens is flipped back to front, 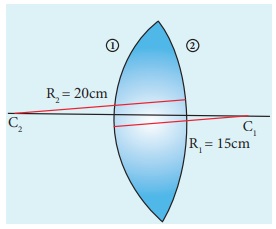 Thus, it is concluded that the focal length of the lens will not change if it is flipped side wise. This is true for any lens. Students can verify this for any lens.

Determine the focal length of the lens made up of a material of refractive index 1.52 as shown in the diagram. (Points C1 and C2  are the centers of curvature of the first and second surface.) 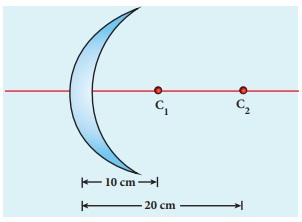 This lens is called convexo-concave lens 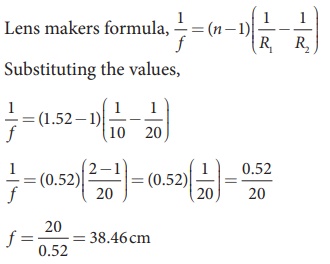 As the focal length is positive, the lens is a converging lens. 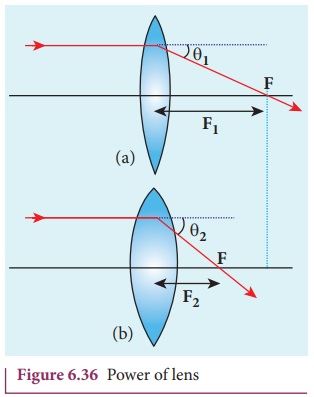 The unit of power is diopter D. 1 D = 1 m–1. Power is positive for converging lens and negative for diverging lens.

From the lens makers formula, equation (6.68), the equation for power can be written as,

If the focal length is 150 cm for a glass lens, what is the power of the lens?

As the power is positive, it is a converging lens.

of focal length f1 and f2 are placed coaxially in contact with each other so that they have a common principal axis. For an object placed at O beyond the focus of the first lens

on the principal axis, an image is formed by it at I'. This image I' acts as an object for the second lens

and the final image is formed at I as shown in Figure. 6.37. As these two lenses are thin, the measurements are done with respect to the common optical centre P in the middle of the two lenses. 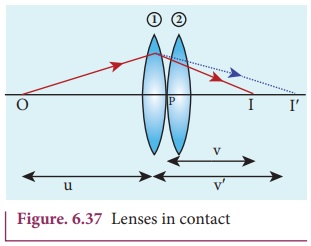 Let, PO be object distance u and PI' be the image distance (v’) for the first lens

and object distance for the second lens

and PI = v be the image distance for the second lens

If the combination acts as a single lens of focal length f so that for an object at the position O it forms the image at I then,

The above equation can be extended for any number of lenses in contact as,

The above equation can be written as power of the lenses as, 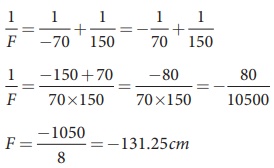 As the focal length is negative, the combination of two lenses is a diverging system of lenses.

The power of combination is,

When two thin lenses are separated by a distance d common optical center cannot be chosen for them. Hence, they cannot be treated as a single thin lens. Actually, such a combination should be treated as a thick lens for which the theory is more involved (beyond the scope of present study). However, as a special case, only when the object is placed at infinity, the combination can be replaced by a single thin lens. The focal length and position of the equivalent lens can be derived by considering the concept of angle of deviation.

The incident and refracted rays subtend the angles, ∠AOP = α and ∠AIP = β with the principal axis respectively. 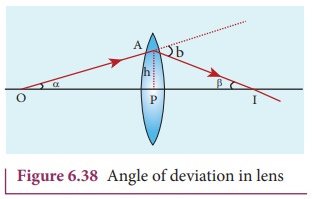 In the triangle ∆OAI, the angle of deviation δ can be written as,

If the height h is small as compared to PO and PI, the angles α, β and δ are also small. Then, 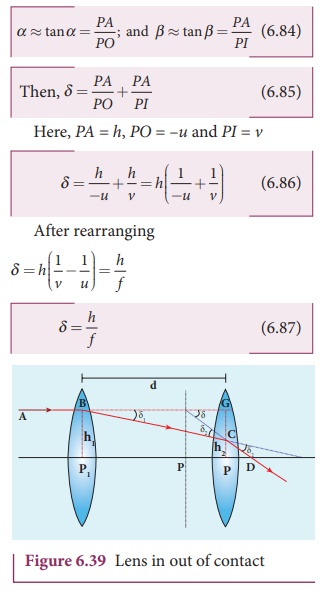 The above equation tells that the angle of deviation is the ratio of height to the focal length. Now, the case of two lenses of focal length f1 and f2 arranged coaxially but separated by a distance d can be considered as shown in Figure 6.39.

For a parallel ray that falls on the arrangement, the two lenses produce deviations δ1 and δ2 respectively and The net deviation δ is. 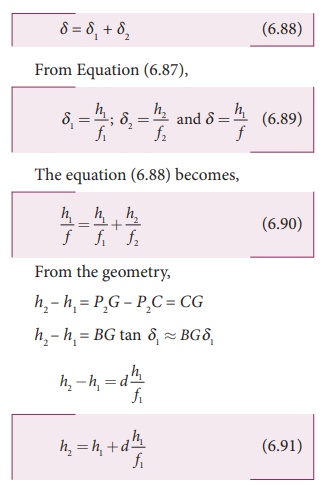 Substituting the above equation in Equation (6.90)

System of combination of lenses is commonly used in designing lenses for cameras, microscopes, telescopes and other optical instruments. They produce better magnification as well as sharpness of the images.

The above equation (6.93) is the position of the equivalent single lens from the second lens. Its position from the first lens is,

The Equation (6.92), (6.93) and (6.94) hold good only for the special case of parallel incident rays or object at infinity. We cannot use these equations if the object is at a finite distance. For finite distance of the object, the image positions must be calculated separately using the lens equation for the two lenses. 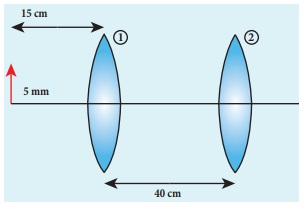 For the first lens, the lens equation is, 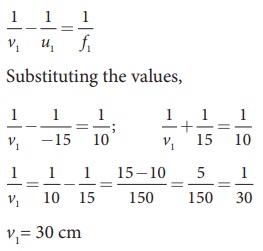 Let us find the height of this image.

As the height of the lens is negative, the image is inverted, real image.

For the second, the lens equation is, 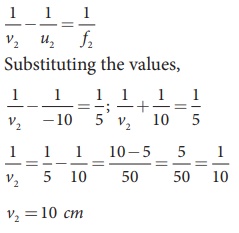 The image is formed 10 cm to the right of the second lens. 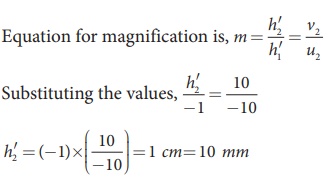 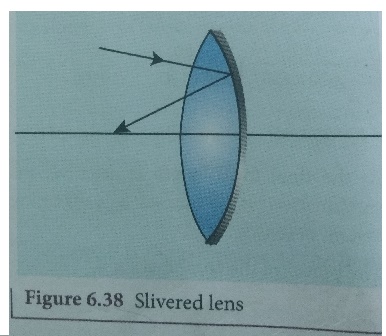 The power P of the silvered lens is,

Proper sign conventions are to be followed for equation (6.80).

Suppose the object distance u and image distance v are to be found, we can very well use the mirror equation (6.8), since the silvered lens is a modified mirror.

A thin bicnvex lens is made up of a glass of refractive index 1.5. The two surfaces have equal radii of curvature of 30 cm each. One of its surfaces is made reflecting by silvering it from outside. (a) What is the focal length and power of this silvered lens? (b) Where should an object be placed in front of this lens so that the image is formed on the object itself? 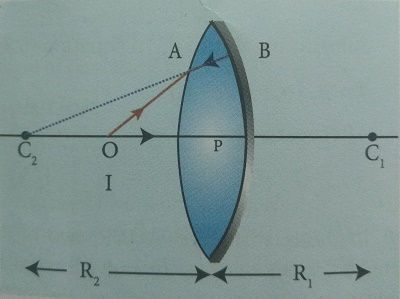 Now the focal length of the slivered lens is,

The silvered mirror behaves as a concave mirror with its focal length on left side.

To find the power of the silvered lens,

As the power is positive it is a converging system.

(b) Writing the mirror formula,

Here, both u and v are same (v = u) as the image coincides with the object.

The object is to be placed 15 cm to the left of the silvered lens.