1. What is angle of deviation due to reflection?

The angle between the incident ray and deviated ray of light is called angle of deviation.

2. Derive the relation between f and R for a spherical mirror.

i) Let C be the centre of curvature of the mirror. Consider a ray of light parallel to the principal axis is incident on the mirror at M. It passes through the principal focus F after reflection.

ii) The line CM is the normal to the mirror at M.

iv) If MP is the perpendicular from M on the principal axis, then The angles ∠MCP = i and. ∠MFP = 2i 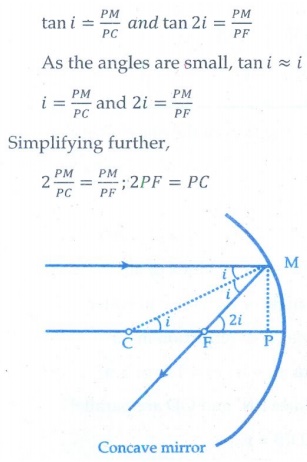 PF is focal length f and PC is the radius of curvature R.

This is the relation between f and R.

3. What are the Cartesian sign conventions for a spherical mirror?

(i) The incident light is taken as if it is travelling from left to right.

(ii) All the distances are measured from the pole of the mirror.

(iii) The distances measured to the right of pole along the principal axis are taken as positive.

(iv) The distances measured to the left of pole along the principal axis are taken as negative.

(v) Heights measured upwards perpendicular to the principal axis are taken as positive.

(vi) Heights measured downwards perpendicular to the principal axis are taken as negative.

Optical path of a medium is defined as the distance d’ light travels in vacuum in the same time it travels a distance d in the medium.

❖ Consider a medium of refractive index n and thickness d.

❖ Light travels with a speed v through the medium in a time t.

❖ In the same time, light can cover a greater distance d' in vacuum as it travels with greater speed c in vacuum. Then,

(i) The incident ray, refracted ray and normal to the refracting surface are all coplanar.

6. What is angle of deviation due to refraction?

The angle between the incident and deviated light is called angle of deviation.

❖ When light travels from rarer to denser medium it deviates towards normal.

❖ When light travels from denser to rarer medium it deviated away from normal.

7. What is principle of reversibility?

The principle of reversibility states that light will follow exactly the same path if its direction of travel is reversed. This is true for both reflection and refraction.

8. What is relative refractive index?

9. Obtain the equation for apparent depth. 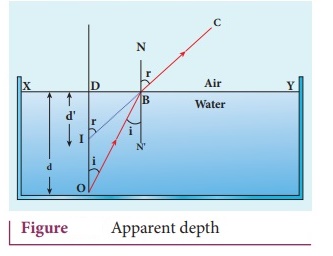 ❖ Let the light from the object O at the bottom of the tank passes from water to air to reach our eyes.

i = angle of incidence in water

r = angle of refraction in air

❖ Since diverging light entering the eye is very narrow, i & r are very small.

since i & r small angles

The bottom appears to be elevated by

The stars actually do not twinkle. They appear twinkling because of the movement of the atmospheric layers with varying refractive indices which is clearly seen in the night sky.

11. What is critical angle and total internal reflection?

The angle of incidence in the denser medium for which the angle of refraction is 90° (or) the refracted ray graces the boundary between the two media is called critical angle ic.

For any angle of incidence greater than the critical angle, the entire light is reflected back into the denser medium itself. This phenomenon is called total internal reflection.

12. Obtain the equation for critical angle.

From the definition of critical angle, using Snell's law we can write

The critical angle ic depends on the refractive index n of the medium.

13. Explain the reason for glittering of diamond.

1) Diamond appears dazzling because the total internal reflection of light happens inside the diamond.

2) The refractive index of only diamond is about 2.417. It is much larger than that for ordinary glass which is about only 1.5.

3) The critical angle of diamond is about 24.4°. It is much less than that of glass.

4) A skilled diamond cutter makes use of this larger range of angle of incidence, to ensure that light entering the diamond is total internally reflected from the many cut faces before getting out.

5) This gives a sparkling effect for diamond.

14. What are mirage and looming?

The refractive index of air increases with its density.

In hot places, air near the ground is hotter than air at a height. Hot air is less dense.

Hence, in still air the refractive index of air increases with height.

Because of this, light from tall objects like a tree, try to pass through a medium whose refractive index decreases towards the ground.

Hence, a ray of light successively deviates away from the normal at different layer of air and undergoes total internal reflection when the angle of incidence near the ground exceeds the critical angle.

This gives an illusion as if the light comes from somewhere below the ground. This phenomenon is called mirage.

Thus, the density and refractive index of air near the ground is greater than at a height.

Hence, an inverted image is formed little above the surface. This phenomenon is called looming.

It is also called as superior mirage, towering and stooping.

15. Write a short notes on the prisms making use of total internal reflection.

1) Prisms can be designed to reflect light by 90° or by 180° by making use of total internal reflection as shown in Figure. 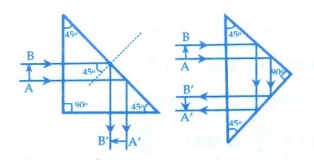 2) The critical angle ic for the material of the prism must be less than 45°.

4) Prisms are also used to produce invert image of a object on the same side (or) other side.

When light entering the water from outside is seen from inside the water, the view is restricted to a particular angle equal to the critical angle ic. The restricted illuminated circular area is called Snell's window.

17. How does an endoscope work?

i) Endoscopes work on the phenomenon of total internal reflection which has bundle of optical fibres is an instrument used by doctors to see inside of a patient's body.

ii) The optical fibres are inserted in to the body through mouth, nose or a special hole made in the body.

iii) Even operations could be carried out with the endoscope cable which has the necessary instruments attached at their ends.

18. What are primary focus and secondary focus of a lens?

i) The primary focus F1 is defined as a point where a point source kept produces a parallel emergent rays to the principal axis after passing through lens.

ii) All the distances are measured from the pole of the lens.

iii) The distances measured to the right of pole along the principal axis are taken as positive.

iv) The distances measured to the left of pole along the principal axis are taken as negative.

vi) The sign of focal length is not decided on the direction of measurement of the focal length from the pole of the lens.

The focal length of the thin lens is taken as positive for a converging (convex) lens and negative for a diverging (concave) lens.

This equation is known as lens equation.

21. Obtain the equation for lateral magnification for thin lens.

2) The ray OP passing through the pole of the lens goes undeviated.

3) The inverted real image II’ formed has a height h’.

4) The lateral or transverse magnification m is defined as the ratio of the height of the image to that of the object.

From the two similar triangles ∠POO’ and ∠PII’ , we can write

Substituting this in the equation (1) for magnification

The Power of a lens is the measure of its deviating ability on an incident light.

The power of a lens is a measure of the degree of convergence or divergence of light falling on it.

The power of a lens P is defined as the reciprocal of its focal length.

The unit of power is dioptre (D) (or) m-1 power is positive for converging lens and negative for diverging lens.

23. Derive the equation for effective focal length for lenses in contact.

i) Consider two lenses (1) and (2) of focal length f1 and f2 are placed coaxially in contact with each other so that they have a common principal axis.

ii) For an object placed at O beyond the focus of the first lens (1) on the principal axis, an image is formed by it at I'.

iii) This image I' acts as an object for the second lens (2) and the final image is formed at I as shown in Figure. 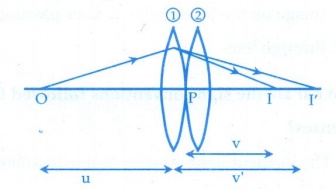 Adding the above two equations

If the combination acts as a single lens of focal length F so that for an object at the position O it forms the image at I then,

The above equation can be extended for any number of lenses in contact as,

The above equation can be written as power of the lenses as,

Where, P is the net power of the lens combination of lenses in contact.

27. What is angle of minimum deviation?

The angle of deviation decreases with increase in angle of incidence and reaches a minimum value and then continues to increase.

The minimum value of angle of deviation is called angle of minimum deviation D.

Dispersion is splitting of white light into its constituent colours. This band of colours of light is called its spectrum.

29. How are rainbows formed?

Rainbow is an example of dispersion of sun light through droplets of water during rainy days.

1) When sunlight falls on the water drop suspended in air, it splits into its constituent seven colours.

3) Primary rainbow is formed when light entering the drop undergoes one total internal reflection inside the drop before coming out from the drop.

5) A secondary rainbow appears outside of a primary rainbow and develops when light entering a raindrop undergoes two total internal reflections.

30. What is Rayleigh’s scattering?

If the scattering of light is by atoms and molecules which have size a very much less than that of the wave length λ of light (a << λ ), then the scattering is called Rayleigh's scattering.

According to Rayleigh scattering law violet colour which has the shortest wavelength gets more scattered than the other colours. The next scattered colour is blue. As our eyes are more sensitive to blue colour than violet colour, the sky appears blue during day time.

32. What is the reason for reddish appearance of sky during sunset and sunrise?

During sunrise and sunset, the light from sun travels a greater distance through the atmosphere. Hence, According to Rayleigh scattering law the blue light which has shorter wavelength is scattered away and the less-scattered red light of longer wavelength manages to reach our eyes. So the sky appear reddish during sunset and sunrise.

33. Why do clouds appear white?

If light is scattered by large particles like dust and water droplets present in the atmosphere which have size a greater than the wavelength  λ of light, a >> λ, the intensity of scattering is equal for all the colours. It is happening in clouds which contains large amount of dust and water droplets. Thus, in clouds all the colours get equally scattered irrespective of wavelength. This is the reason for the whitish appearance of cloud.