The following assumptions are made while considering refraction at spherical surfaces.

(a) The incident light is assumed to be monochromatic (single colour)

(b) The incident ray of light is very close to the principal axis (paraxial rays).

The sign conventions are similar to that of the spherical mirrors. 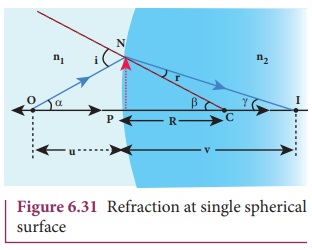 Light from O falls on the refracting surface at N. The normal drawn at the point of incidence passes through the centre of curvature C. As n2>n1, light in the denser medium deviates towards the normal and meets the principal axis at I where the image is formed.

Snell’s law in product form for the refraction at the point N could be written as,

As the angles are small, sine of the angle could be approximated to the angle itself.

As these angles are small, tan of the angle could be approximated to the angle itself. 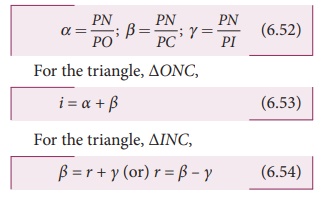 If the first medium is air then, n1 = 1 and the second medium is taken just as n2 = n, then the equation is reduced to,

Locate the image of the point object O in the situation shown. The point C denotes the centre of curvature of the separating surface. 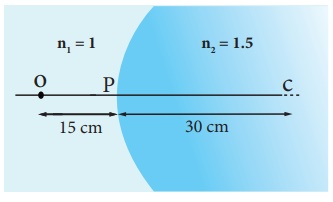 Equation for single spherical surface is, 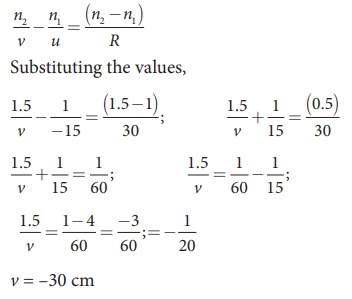 The image is a virtual image formed 30 cm to the left of the spherical surface.

Let us, consider an extended object OO’ is kept perpendicular to the principal axis to the left of the single spherical surface as shown in Figure 6.32. The image formed on the other side of the surface is II ‘ . Consider a ray from O’ in the first medium towards C in the second medium. As this ray is incident normal to the spherical surface, it goes undeviated in the second medium.The position of image may be located using the Equation (6.60). 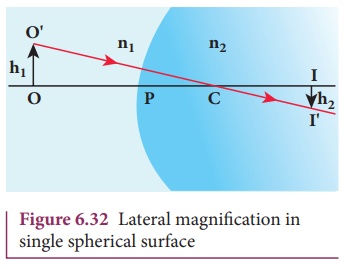 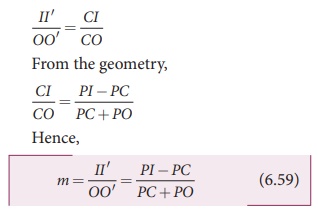 We can also arrive at an equation for lateral magnification involving the refractive indices of the two media.

Let us consider the equation for single spherical surface as, 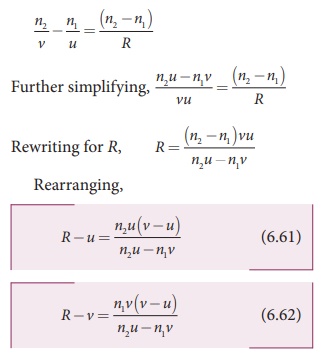 Find the size of the image formed in the given figure.

Equation for single spherical surface is, 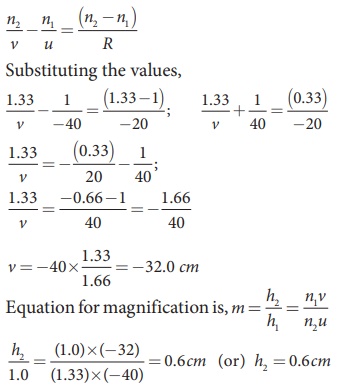 The erect virtual image of height 0.6 cm is formed at 32.0 cm to the left of the single spherical surface.