Light travels with the highest speed in vacuum. The speed of light in vacuum is denoted as c .

Apparatus: The apparatus used by Fizeau for determining speed of light in air is shown in Figure 6.13. The light from the source S was first allowed to fall on a partially silvered glass plate G kept at an angle of 45º to the incident light from the source. The light then was allowed to pass through a rotating toothed-wheel with N teeth and N cuts of equal widths whose speed of rotation could be varied through an external mechanism (not shown in the Figure). The light passing through one cut in the wheel will get reflected by a mirror M kept at a long distance d, about 8 km from the toothed wheel. If the toothed wheel was not rotating, the reflected light from the mirror would again pass through the same cut and reach the eyes of the observer through the partially silvered glass plate.

Working: The angular speed of rotation of the toothed wheel was increased from zero to a value ω until light passing through one cut would completely be blocked by the adjacent tooth. This is ensured by the disappearance of light while looking through the partially silvered glass plate.

Expression for speed of light: The speed of light in air v is equal to the ratio of the distance the light travelled from the toothed wheel to the mirror and back 2d to the time taken t.

The distance d is a known value from the arrangement. The time taken t for the light to travel the distance to and fro is calculated from the angular speed ω of the toothed wheel.

The angular speed ω of the toothed wheel when the light disappeared for the first time is,

Here, θ is the angle between the tooth and the slot which is rotated by the toothed wheel within that time t. 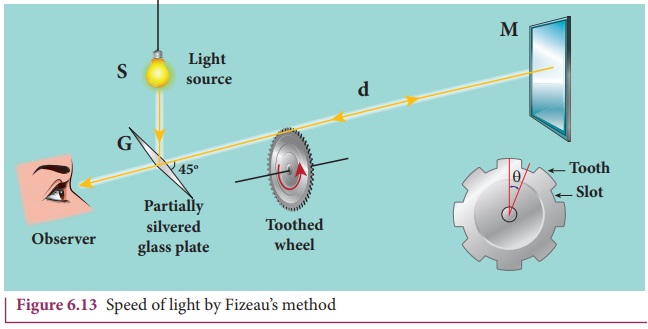 Substituting for θ in the equation 6.13. for ω,

Rewriting the above equation for t,

Fizeau had some difficulty to visually estimate the minimum intensity of the light when blocked by the adjacent tooth, and his value for speed of light was very close to the actual value. Later on, with the same idea of Fizeau and with much sophisticated instruments, the speed of light in air was determined as, v = 2.99792×108 m s–1.

After the disappearance of light for the first time while increasing the speed of rotation of the toothed-wheel from zero to ω, on further increase of speed of rotation of the wheel to 2ω, the light would appear again due to the passing of reflected light through the next slot. So, for every odd value of ω, light will disappear (stopped by tooth) and for every even value of ω light will appear (allowed by slot).

Speed of light through different media

Refractive index of a transparent medium gives an idea about the speed of light in that medium.

One type of transparent glass has refractive index 1.5. What is the speed of light through this glass? 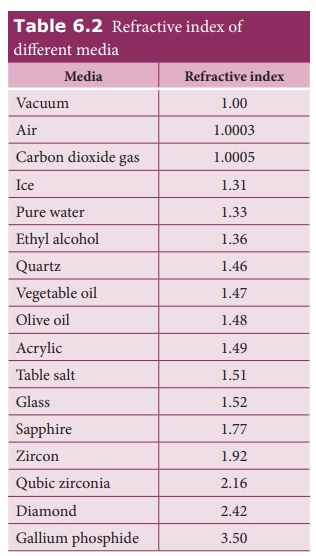 Optical path of a medium is defined as the distance d' light travels in vacuum in the same time it travels a distance d in the medium.

Let us consider a medium of refractive index n and thickness d. Light travels with a speed v through the medium in a time t. Then we can write,

In the same time, light can cover a greater distance d' in vacuum as it travels with greater speed c in vacuum as shown in Figure 6.14. Then we have, 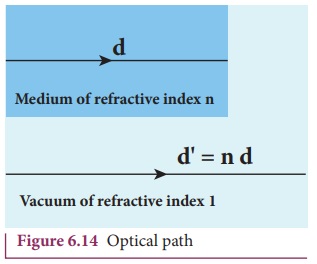 As the time taken in both the cases is the same, we can equate the time t as,

Light travels from air in to glass slab of thickness 50 cm and refractive index 1.5.

(i) What is the speed of light in glass?

(ii) What is the time taken by the light to travel through the glass slab?

(iii) What is the optical path of the glass slab?

speed of light in glass is,

Time taken by light to travel through glass slab is,