Probability theory is nothing but common sense reduced to calculation -Laplace

Probability theory is nothing but common sense reduced to calculation -Laplace

The history of random variables and how they evolved into mapping from sample space to real numbers was a subject of interest. The modern interpretation certainly occurred after the invention of sets and maps (1900), but as Eremenko says, random variables were used much earlier. Mathematicians felt the need to interpret random variables as maps. In 1812, Laplace published his book on Theory analytique des probabilities in which he laid down many fundamental results in statistics. The first half of this treatise was concerned with probability methods and problems and the second half with statistical applications. 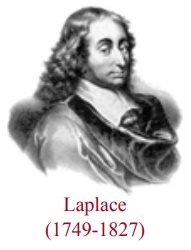 The concept of a sample space that completely describes the possible outcomes of a random experiment has been developed in volume 2 of I year higher secondary course.

In this chapter, we learn about a function, called random variable defined on the sample space of a random experiment and its probability distribution.