Parts of a Circle

Circles are geometric shapes you can see all around you. The significance of the concept of a circle can be well understood from the fact that the wheel is one of the ground-breaking inventions in the history of mankind.

Parts of a Circle

Circles are geometric shapes you can see all around you. The significance of the concept of a circle can be well understood from the fact that the wheel is one of the ground-breaking inventions in the history of mankind. 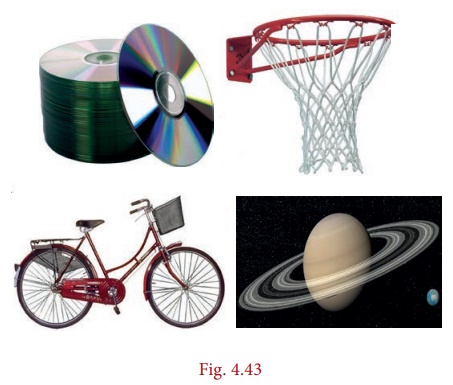 A line that cuts the circle in two points is called a secant of the circle.

A line segment whose end points lie on the circle is called a chord of the circle.

A circle notably differs from a polygon. A polygon (for example, a quadrilateral) has edges and corners while, a circle is a ‘smooth’ curve.

A chord of a circle that has the centre is called a diameter of the circle. The circumference of a circle is its boundary. (We use the term perimeter in the case of polygons).

In Fig.4.44, we see that all the line segments meet at two points on the circle. 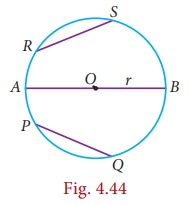 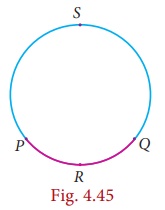 This continuous part of a circle is called an arc of the circle. Usually the arcs are denoted in anti-clockwise direction.

Now consider the points P and Q in the circle (Fig.4.45). It divides the whole circle into two parts. One is longer and another is shorter. The longer one is called major arc

and shorter one is called minor arc 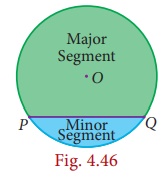 Now in (Fig.4.46), consider the region which is surrounded by the chord PQ and major arc 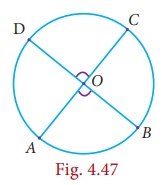 of a circle subtend the same angle at the centre, they are said to be congruent arcs and we write,

A diameter of a circle is:

• the line segment which bisects the circle.

• the largest chord of a circle.

• a line of symmetry for the circle.

• twice in length of a radius in a circle.

Circles with the same centre but different radii are said to be concentric.

Here are some real-life examples: 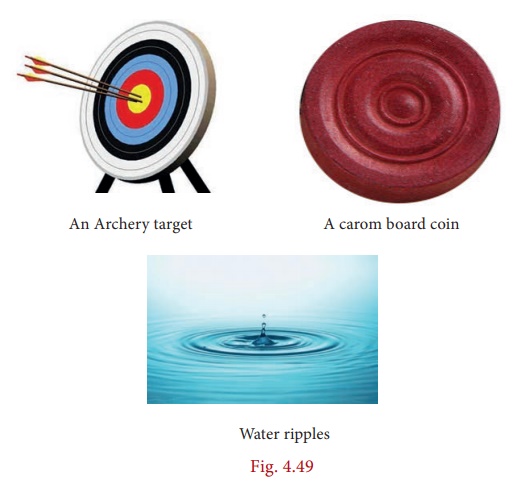 Two circles are congruent if they are copies of one another or identical. That is, they have the same size. Here are some real life examples:

Position of a Point with respect to a Circle

Consider a circle in a plane (Fig.4.51). Consider any point P on the circle. If the distance from the centre O to the point P is OP, then 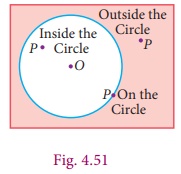 (iii) OP > radius(If the point P lies outside the circle)

So, a circle divides the plane on which it lies into three parts.

1. Every chord of a circle contains exactly two points of the circle.

2. All radii of a circle are of same length.

3. Every radius of a circle is a chord.

4. Every chord of a circle is a diameter.

5. Every diameter of a circle is a chord.

6. There can be any number of diameters for a circle.

8. A circle divides the plane into three disjoint parts.

9. A circle can be partitioned into a major arc and a minor arc.

10. The distance from the centre of a circle to the circumference is that of a diameter

1. How many sides does a circle have ? 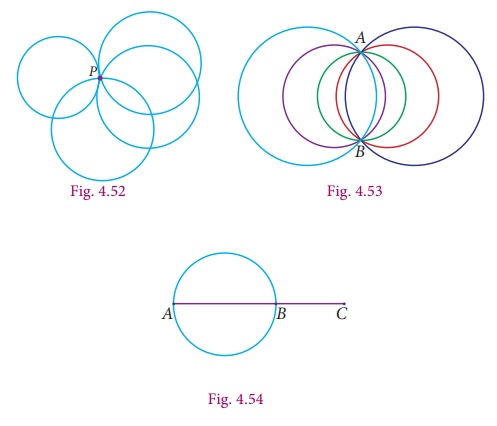 Now consider three collinear points A, B and C (Fig.4.14). Can we draw a circle passing through these three points? Think over it. If the points are collinear, we can’t? 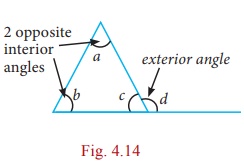 If the three points are non collinear, they form a triangle (Fig.4.55). Recall the construction of the circumcentre. The intersecting point of the perpendicular bisector of the sides is the circumcentre and the circle is circumcircle. 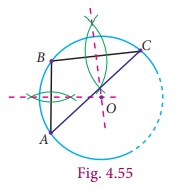 Therefore from this we know that, there is a unique circle which passes through A, B and C. Now, the above statement leads to a result as follows.

Theorem 6 There is one and only one circle passing through three non-collinear points.