Just we look at some real life situations where

• the motion of projectile, rocket, satellite and planets

• the charge or current in the electric circuit

• the conduction of heat on a rod or in a slab

• the vibrations of a wire or membrane etc

Differential Equations emanate from the problems in geometry, mechanics, physics, chemistry, and engineering studies. We have studied about “rates” in our early classes. This is also known as instantaneous rate of change which is denoted as dy/dx.

We give below some relations between the rate of change and unknown functions that occur in real life situations.

(a) The rate of change of y with respect to x is directly proportional to y :

(b) The rate of change of y with respect to x is directly proportional to the product of y2 and x :

(c) The rate of change of y with respect to x is inversely proportional to y :

A differential equation is an equation in which some derivatives of the unknown function occur.

In many cases the independent variable is taken to be time. 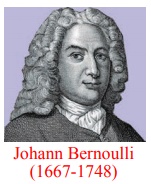 The subject of diﬀerential equations was invented along with calculus by Newton and Leibniz in order to solve problems in geometry and physics. It played a crucial part in the development of Newtonian physics by the Bernoulli family, Euler, and others. Some of the applications of differential equations in our daily life are found in mobile phones, motor cars, air flights, weather forecast, internet, health care, or in many other daily activities.

In this chapter, we introduce and discuss the first order ordinary differential equations and some methods to find their solutions.

• find the order and degree of the differential equations