Now, we consider the growth of a population (for example, human, an animal, or a bacteria colony) as a function of time t .

Let x(t) be the size of the population at any time t . Although x(t) is integer-valued, we approximate x(t) as a differentiable function and techniques of differential equation can be applied to determine x(t) . Assume that population grows at a rate directly proportional to the amount of population present at that time. Then, we obtain

The solution of the differential equation is x(t) = Cekt , where C is a constant of integration. The values of C and k are determined with the help of initial conditions. Thus, the population increases exponentially with time. This law of population growth is called Malthusian law.

By separating the variables, we obtain dx/x = kdt .

Assume that the population is tripled in t1 years.

It is assumed that the rate dA/dt at which the nuclei of a substance decays is proportional to the  amount A(t) of the substance remaining at time t.

Thus, the required differential equation is

where k is the constant of proportionality. Here k < 0 , since decay occurs.

From equations (1) and (2), we see that the differential equations are the same, but the difference is only in the interpretations of the symbols and the constants of proportionality. For growth as we expect in (1), k > 0 and in the case of (2) for decay, k < 0 .

A single differential equation can serve as a mathematical model for many different phenomena.

A radioactive isotope has an initial mass 200mg , which two years later is 50mg . Find the expression for the amount of the isotope remaining at any time. What is its half-life? (half-life means the time taken for the radioactivity of a specified isotope to fall to half its original value).

Let A be the mass of the isotope remaining after t years, and let −k be the constant of proportionality, where k > 0 . Then the rate of decomposition is modeled by dA/dt = −kA , where the minus sign indicates that the mass is decreasing. It is a separable equation. Separating the variables, we get dA / A = −kdt

is the mass of isotope remaining after t years.

The half-life th is the time corresponding to A = 100mg . 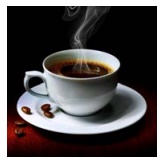 What happens to the temperature of the coffee? We observe that the cup of coffee will cool off until it reaches the room temperature.

Now consider taking a 35° glass of cold water from the refrigerator and kept it on the table in an 80°C room. What happens to the temperature of the cold water? Similarly, we can observe the water will warm up until it reaches room temperature.

Let T be the temperature of the body at any time t and with time 0 taken to be 8 p.m.

By Newton’s law of cooling,

It appears that the person was murdered at about 5.30 p.m.

Mixing problems occur quite frequently in chemical industry. Now we explain how to solve the basic model involving a single tank.

A substance S is allowed to flow into a certain mixture in a container at a constant rate, and the mixture is kept uniform by stirring. Further, in one such situation, this uniform mixture simultaneously flows out of the container at another rate. Now we seek to determine the quantity of the substance S present in the mixture at time t .

A tank contains 1000 litres of water in which 100 grams of salt is dissolved. Brine (Brine is a high-concentration solution of salt (usually sodium chloride) in water) runs in a rate of 10 litres per minute, and each litre contains 5grams of dissolved salt. The mixture of the tank is kept uniform by stirring. Brine runs out at 10 litres per minute. Find the amount of salt at any time t .

Let x(t) denote the amount of salt in the tank at time t . Its rate of change is dx/dt = in flow rate - out flow rate

This can be written as