Neurons in the hypothalamus produce sub-stances that migrate within the axons into the hypophysis and enter there into the bloodstream. This endocrine function of neurons is called neurosecretion. The sub-stances are produced in the perikarya and appear there as small secretory droplets (B1). The cells, which are genuine neurons with dendrites and axons, represent a tran-sitional stage between neurons and secretory cells. Both these cell types are of ectodermal origin and are closely related with respect to physiology and metabolism. Both of them produce a specific substance that they secrete in response to a nervous or humoral stimulus: the neurons (A2) release transmitter substances (neurotransmitters) and the secretory cells (A3) release their secretion. Transitional forms between the two cell types are the neurosecretory cells (A4) and the endocrine cells A5), both of which release their secretion into the blood-stream. 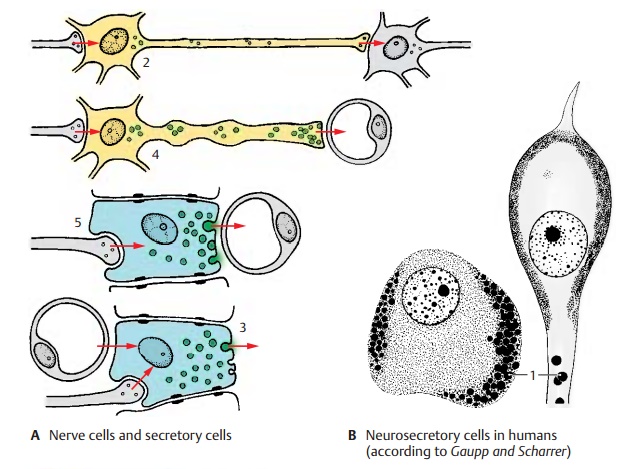 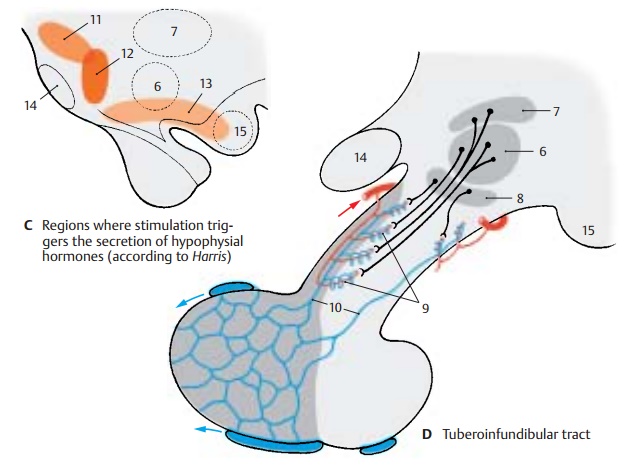 Corresponding to the structure of the hy-pophysis with an anterior lobe (adenohy-pophysis) and a posterior lobe (neurohy-pophysis), there are two different fiber sys-tems extending from the hypothalamus to the hypophysis, namely, the tuberoinfun-dibular tract and the hypothalamohypophy-sial tract. In both, the coupling of the neuralsystem with the endocrine system is achieved by the sequential arrangement of nerve fibers and capillaries (neurovascularchain).

The tuberoinfundibular tract (D) consists of thin nerve fibers that originate in the tuberal nuclei, namely, the ventromedial nu-cleus (D6), the dorsomedial nucleus (D7), andthe infundibular nucleus (D8), and extend into the hypophysial stalk. The substances produced in the perikarya enter from the axon terminals into the portal capillaries (D9) and pass through the portal veins (D10) into the capillary bed of the adenohy-pophysis. They are stimulating substances, releasing factors, which cause the release ofglandotropic hormones (messengers that affect other endocrine glands) by the ade-nohypophysis (see vol. 2).

The production of specific releasing factors cannot be attributed to individual hy-pothalamic nuclei. The regions from which an increased secretion can be induced by electrical stimulation (C) do not correspond to the tuberal nuclei. Stimulation of the pre-optic region (C11) results in an increased secretion of luteotropic hormone. Stimula-tion caudally to the optic chiasm (C12) leads to the release of thyrotropic hormone, and stimulation of the ventral hypothalamus (tuber cinereum to mamillary recess) (C13) leads to the release of gonadotropic hor-mone. In addition to releasing factors, inhib-iting factors, inhibiting factors have been identified that block the release of hor-mones in the adenohypophysis.

The hypothalamohypophysial tract (D) consists of the supraopticohypophysical tract and the paraventriculohypophysial tract which origi-nate in the supraoptic nucleus (D1) and in the paraventricular nucleus (D2), respec-tively. The fibers run through the hypophy-sial stalk into the hypophysial posterior lobe where they terminate at the capillaries. The hormones produced by the neurons of both hypothalamic nuclei migrate along this pathway to the axon terminals and enter from here into the bloodstream. Electricalstimulation of the supraoptic nucleus (C3)leads to an increased secretion of vasopres-sin (antidiuretic hormone), while stimula-tion of the paraventricular nucleus (C4) leads to an increased secretion of oxytocin. In this system, the neurons do not release stimulating substances that affect the secre-tion of a hormone by an endocrine gland (such as the glandotropic hormones or re-leasing factors of the tuberoinfundibular system), but they themselves produce hor-mones that have a direct effect on the target organs (effector hormones). The carrier sub-stances to which the hormones are bound during their migration in the axons can be demonstrated histologically. These Gomori-positive substances often cause swellings of the axons (Herring bodies) (B5).

The neurosecretory substances in axons and swellings appear in the electron-micro-scopic image as granules that are much larger than synaptic vesicles. At the capillar-ies of the neurohypophysis, the axons form club-shaped endings (AD6) containing small, clear synaptic vesicles in addition to the large granules. At the sites of contact with axon terminals, the capillary walls lack the glial covering layer that, in the central nervous system, forms the boundary be-tween ectodermal and mesodermal tissues and envelops all vessels. It is here that the neurosecretory product enters the bloodstream. At the terminal bulbs of the neurosecretory cells, there are also syn-apses (A7) of unknown origin, whichnevertheless certainly influence the release of the hormones. 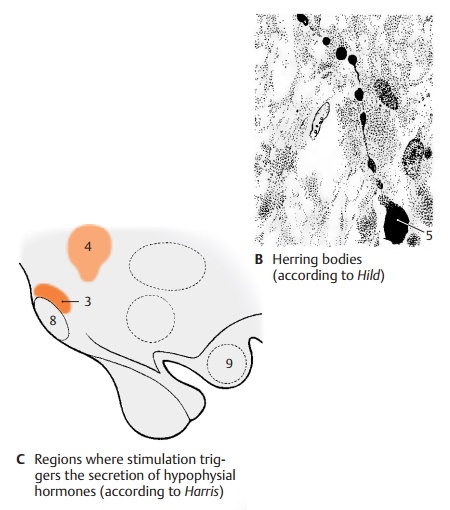 Presumably the regulation of neurosecretion is achieved not only via synaptic contacts but also via the bloodstream. The exceptionally rich vascularization of hypothalamic nuclei and the existence of endocellular capillaries support this hypothesis. This arrangement provides a pathway for humoral feedback and forms a regulatory circuit for control-ling the production and secretion of hor-mones, consisting of a neural limb (su-praopticohypophysial tract) and a humoral limb (circulation). 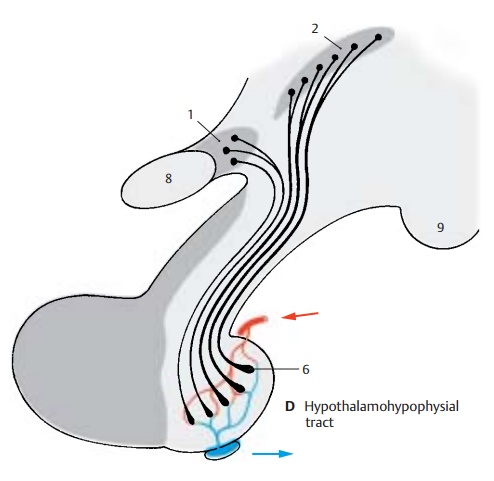