Development of the Prosencephalon

Brain and spinal cord develop from the neural tube which forms several brain ves-icles at its anterior segment, namely, the rhombencephalon (A1), mesencephalon (A2), diencephalon (A3), and telencephalon (A4).

Development of the Prosencephalon

Brain and spinal cord develop from the neural tube which forms several brain ves-icles at its anterior segment, namely, the rhombencephalon (A1),mesencephalon (A2), diencephalon (A3), and telencephalon (A4).The lateral walls of the vesicles thicken to become the brain substance proper in which the nerve cells and their processes differentiate. The developmental process begins in the rhombencephalon and spreads to the mesencephalon and dien-cephalon. Development of the telen-cephalon is greatly delayed. A thin-walled vesicle forms on each side so that the telen-cephalon becomes subdivided into three parts, namely, the two symmetrical hemi-spheres (A5) and the unpaired median por-tion (A6), which forms the anterior wall of the third ventricle (terminal lamina).

The vesicles of the telencephalon begin to cover the diencephalon. As they expand, particularly in caudal direction, the telodiencephalic boundarybecomes dis-placed. Initially, it represents the frontal border line (A7) but then runs more and more obliquely (A8) until it finally becomes the lateral border (A9) of the diencephalon. The diencephalon thus comes to lie be-tween the two hemispheres, having almost no outer surface. The three brain sections that are initially arranged one behind the other, namely, mesencephalon, dien-cephalon (red), and telencephalon (yellow), become largely positioned one within the other in the mature brain.

Only the floor of the diencephalon is visible at the surface of the brain; it forms the opticchiasm, the tuber cinereum, and the mamil-lary bodies at the base of the brain.The roof of the diencephalon becomes vis-ible only after cutting horizontally to re-move the corpus callosum (B). This exposes the roof of the third ventricle and the two thalami. The entire region is covered by avascularized connective tissue plate, the tela choroidea (D10), the removal of whichopens the third ventricle (C). Over the third ventricle and in the medial wall of the hemi-sphere, the brain tissue is extremely thin and becomes invaginated into the ventricu-lar cavity by protruding vascular loops. The vascular convolutions lying in the ventricle form the choroid plexus(D11) (production of cerebrospinal fluid). Upon removal of tela choroidea and choroid plexus, the thinned wall of the cerebral hemisphere is torn away and only the sepa-ration line remains as the choroid line (C12). The surface of the thalamus (C13) becomes exposed up to this separation line, while it is still covered laterally by the thinned wall of the hemisphere. The segment of the thinned wall of the hemisphere between the attachment of the plexus and the thalamostriate vein (C–E14) is called thelamina affixa (CD15). It adheres to the dorsalsurface of the thalamus and fuses with it in the mature brain (E16). The thalamostriate vein (C – E14), which runs between thalamus and caudate nucleus (C – E17), marks the boundary between diencephalon and telencephalon when viewed from above. 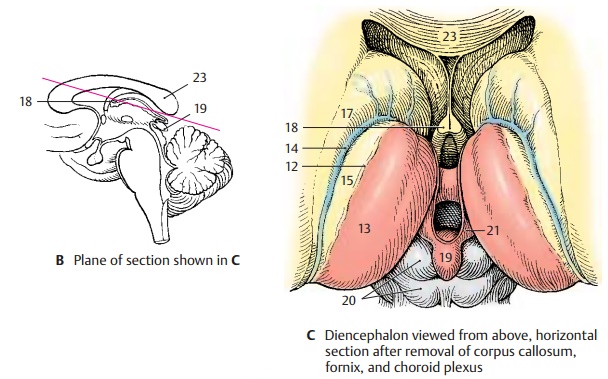