Ventral anterior nucleus (VA) (A4).It receives afferent fibers mainly from the internal segment of the globus pallidus (A5) (they probably originate in the caudate nucleus [A6]) and from the nonspecific thalamic nuclei.

Ventral anterior nucleus (VA) (A4).It receives afferent fibers mainly from the internal segment of the globus pallidus (A5) (they probably originate in the caudate nucleus [A6]) and from the nonspecific thalamic nuclei. Additional fibers are thought to stem from the substantia nigra, the interstitial nucleus of Cajal, and the reticular formation. The nucleus projects to the premotor cortex (A7) but depends only partially on the cortex because only half of its neurons die after injury to the cortical region. The ventral anterior nucleus is inte-grated into the ascending activation system; stimulation within the nuclear zone causes a change in electrical activity of the cortex. 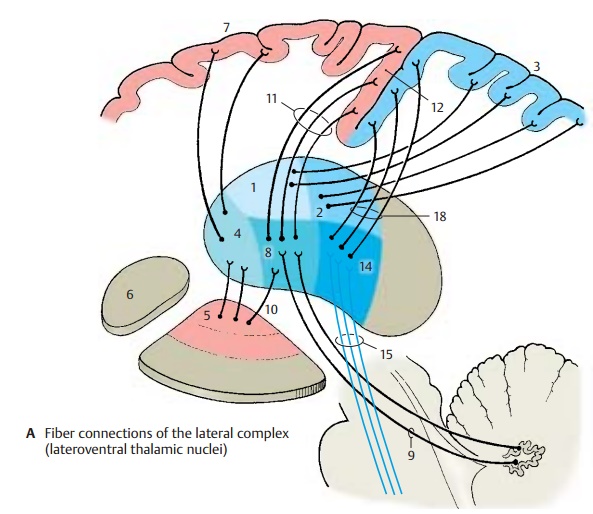 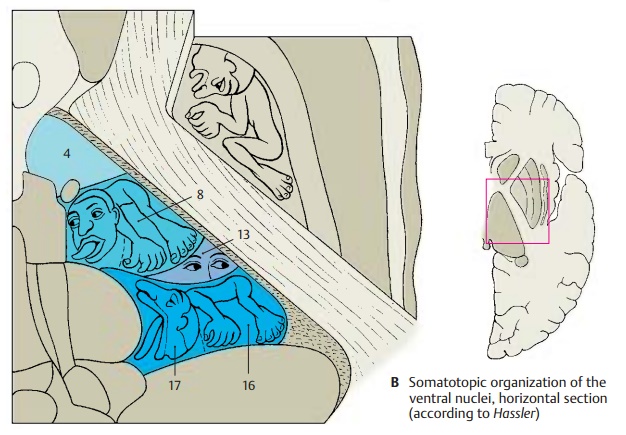 Ventral lateral nucleus (VL) (AB8).Themost important afferent system of the nu-cleus are the fibers of the crossed superior cerebellar peduncle (A9). In the anterior segment of the ventral lateral nucleus there terminate fibers from the globus pallidus (thalamic fasciculus) (A10). The efferent fibers (A11) extend to the cortex of the pre-central gyrus (A12). The somatotopic or-ganization of the ventral lateral nucleus is obvious in this system (AB8); the lateral part of the nucleus is connected to the leg region of the precentral cortex, the adjacent parts to the trunk and arm regions, and the medial part to the head region. Thus, thalamic nucleus and cortical area show a corresponding topical subdivision. Informa-tion from the cerebellum (body posture, coordination, muscle tone) reaches the motor cortex via the ventral lateral nucleus; the cerebellum influences voluntary move-ment in this way. A narrow caudal region of the nucleus is distinguished as ventral inter-mediate nucleus (B13). Forel’s dorsolateraltegmental fasciculus from the ipsilateral vestibular nuclei terminates here (head and gaze turn to the same side).

Ventral posterior nucleus (VP) (A14).Thenucleus is the terminus for the crossed, sec-ondary sensory pathways (A15). Originating from the nuclei of the posterior column, the medial lemniscus radiates into the lateral segment of the nucleus, the ven-tral posterolateral nucleus (VPL) (B16). Thefibers of the gracile nucleus lie laterally, those of the cuneate nucleus medially. The resulting somatotopic organization of the nucleus can also be demonstrated electro-physiologically; the lower limb is repre-sented laterally, trunk and upper limb me-dially. The secondary trigeminal fibers (lemniscus trigeminal) terminate in the me-dial segment of the nucleus, the ventral post-eromedial nucleus (VPM) (B17). They transmitsensory information from the head and oral cavity, thus completing the homunculus of the contralateral half of the body. The ter-minus of the secondary gustatory pathway  lies most medially. The pathways of the protopathic sensibility (see p. 324), namely, the spinothalamic tract and the trigeminal pain fibers, are thought to termi-nate bilaterally in the basal areas of the nu-cleus. The efferent fibers of the nucleus (A18) extend to the sensory postcentral area, the somatotopic organization of which results from the topical subdivision of the ventral posterior nucleus and its pro-jection to the cerebral cortex.

Functional Topography of the Ventral Nuclei (A, B)

Knowledge of the functional organization makes it possible to stop severe pain through stereotactic destruction within the ventral posterior nucleuswithout affectingtactile sensation. By destroying areas within the ventral lateral nucleus, motor distur-bances (hyperkinesis) can be eliminated without producing concomitant paralysis. The controlled stimulation required for these procedures yields clues regarding the representation of various body regions. As shown in the stimulation diagram (red sym-bols) (A), the representation of the body runs obliquely from dorsolateral (leg region, | ; arm region, – ) to mediobasal (head re-gion, (!)). Controlled stimulation of the ventral lateral nucleus (orange symbols) (B) results also in involuntary sound produc-tion (") or eruptively uttered sentences (!), thereby revealing which of the two thalami is the dominant one, depending on the dominant hemisphere (in right-handed persons, this is the left thalamus). 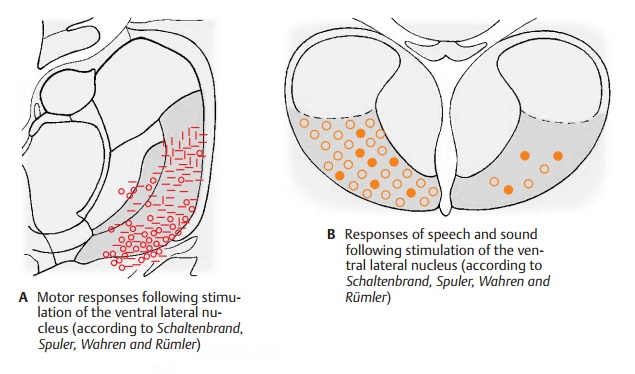