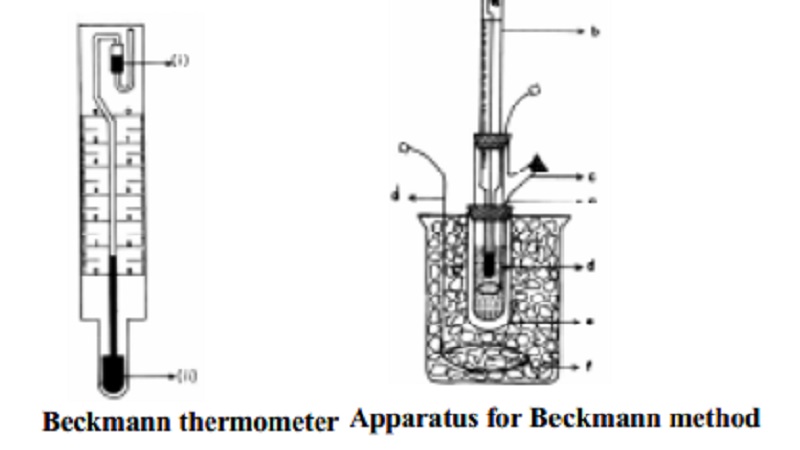 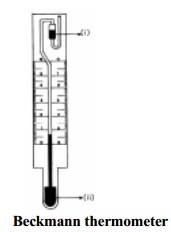 A simple Beckmann apparatus is shown in Fig.11.5. It consists of a freezing tube (a) with a side arm (c) through which a known amount of a solute can be introduced. A stopper carrying a Beckmann thermometer (b) and a stirrer (d) is fitted in to the freezing tube. To prevent rapid cooling of the contents of the freezing tube, A, a guard tube (e) surrounds the tube so that there is an air space between a and e. This assembly, as a whole, is placed in a wide vessel V which contains a freezing mixture (f) maintaining a low temperature around 5C below the freezing point of the pure solvent. 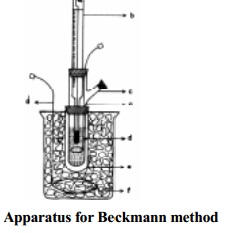 A known weight of the pure solvent is placed in the tube (a). It is cooled with gentle and continuous stirring. As a result of super cooling, the temperature of the solvent will fall by about 0.5 deg C below its freezing point. Vigorous stirring is then set in when solid starts separating and the temperature rises to the exact freezing point. This temperature remains constant, for some time, until all the liquid solvent gets solidified and is noted as To.

The tube (a) is taken out, warmed to melt the solid and a known weight of the solute is added through the side arm (c). When the solute is dissolved in to the solvent forming a solution, the tube (a) is put back in to the original position and the freezing point of the solution (T) is redetermined in the same manner as before. The difference between the two readings gives the freezing point depression (∆Tf).

Depression in freezing point ∆Tf = To-T. From this value, the molecular mass of the non-volatile solute can be determined using the expression and known Kf value. 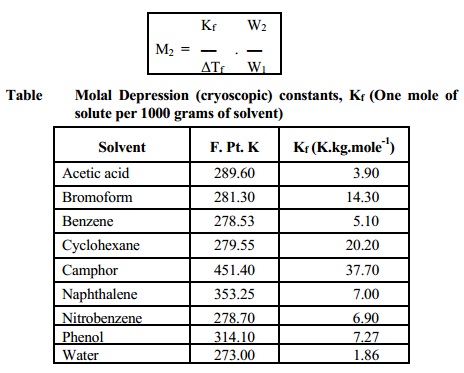