hRequirement for the servers to authenticate themselves to users.

The actual Kerberos protocol version 4 is as follows :

have an Authentication Server (AS)

users initially negotiate with AS to identify self

have a Ticket Granting server (TGS) 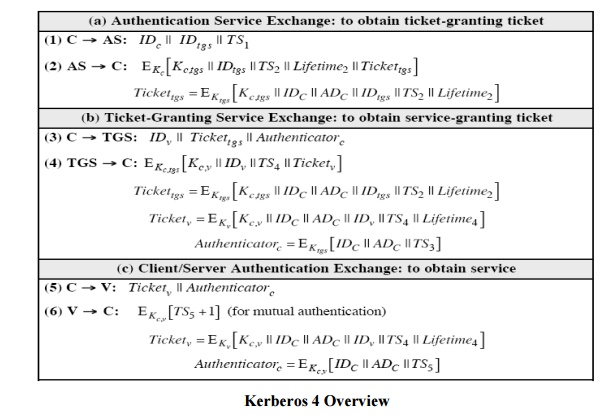 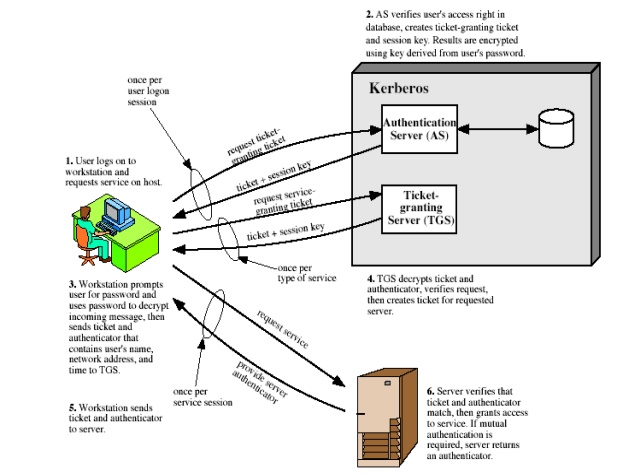 A full-service Kerberos environment consisting of a Kerberos server, a number of clients, and a

Such an environment is referred to as a Kerberos realm.

The concept of realm can be explained as follows. 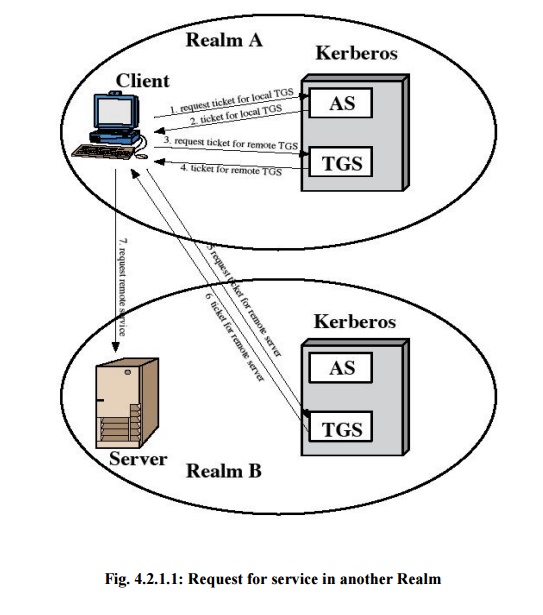 A read-only copy of the Kerberos database might also reside on other Kerberos computer systems.

However, all changes to the database must be made on the master computer system. Changing or accessing the contents of a Kerberos database requires the Kerberos master password.

Version 5 of Kerberos provides a number of improvements over version 4.

Differences between version 4 and 5

Version 5 is intended to address the limitations of version 4 in two areas: 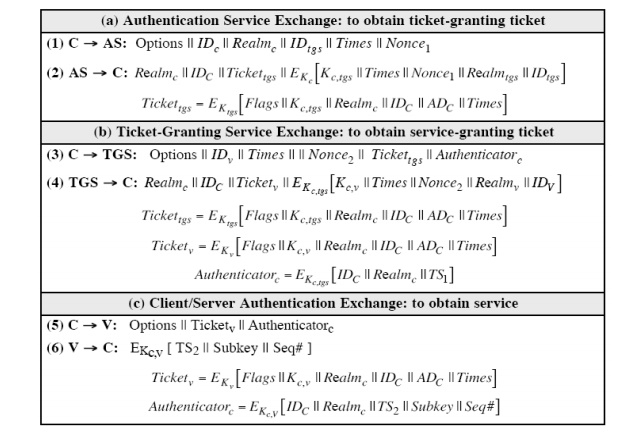 First, consider the authentication service exchange. Message (1) is a client request for a ticket-granting ticket. As before, it includes the ID of the user and the TGS. The following new elements are added:

Options: Used to request that certain flags be set in the returned ticket

Times: Used by the client to request the following time settings in the ticket: from: the desired start time for the requested ticket

Nonce: A random value to be repeated in message (2) to assure that the response is fresh and has not been replayed by an opponent

Message (2) returns a ticket-granting ticket, identifying information for the client, and a block encrypted using the encryption key based on the user's password.

This block includes the session key to be used between the client and the TGS, times specified in message (1), the nonce from message (1), and TGS identifying information.

The ticket itself includes the session key, identifying information for the client, the requested time values, and flags that reflect the status of this ticket and the requested options.

These flags introduce significant new functionality to version 5. For now, we defer a discussion of these flags and concentrate on the overall structure of the version 5 protocol.

Let us now compare the ticket-granting service exchange for versions 4 and 5. We see that message (3) for both versions includes an authenticator, a ticket, and the name of the requested service.

In addition, version 5 includes requested times and options for the ticket and a nonce, all with functions similar to those of message (1).

The authenticator itself is essentially the same as the one used in version 4.

Message (4) has the same structure as message (2), returning a ticket plus information needed by the client, the latter encrypted with the session key now shared by the client and the TGS.

Subkey: The client's choice for an encryption key to be used to protect this

specific application session. If this field is omitted, the session key from the ticket (Kc,v) is used.

Sequence number: An optional field that specifies the starting sequence number to be used by the server for messages sent to the client during this session. Messages may be sequence numbered to detect replays.

If mutual authentication is required, the server responds with message (6). This message includes the timestamp from the authenticator. Note that in version 4, the timestamp was incremented by one. This is not necessary in version 5 because the nature of the format of messages is such that it is not possible for an opponent to create message (6) without knowledge of the appropriate encryption keys.

The flags field included in tickets in version 5 supports expanded functionality compared to that available in version 4.