The human body consists of numerous tissues and organs that are diverse in structure and function.

The human body consists of numerous tissues and organs that are diverse in structure and function. Yet they function together, and in harmony, for the well being of the body as a whole. It is obvious that there has to be some kind of influence that monitors and controls the working of different parts of the body. Although there are other mechanisms that help in such control (e.g. hormones) the overwhelming role in directing the activities of the body rests with the nervous system. Neuroanatomy is the study of the structural aspects of the nervous system. It cannot be emphasised too strongly that the study of structure is meaningless unless correlated with function. Division of a study of the nervous system into neuroanatomy and neurophysiology is only a matter of convenience.

Divisions of the Nervous System

The brain consists of (a) the cerebrum, made up of two large cerebral hemispheres, (b) the cerebellum, (c) the midbrain, (d) thepons, and (e) the medulla oblongata. The midbrain, ponsand medulla together form the brainstem. The medulla is continuous, below, with the spinal cord.

The peripheral nerves include those that supply skin, muscles and joints of the body wall and limbs, and those that supply visceral structures e.g., heart, lungs, stomach etc. Each of these sets of peripheral nerves is intimately associated with the brain and spinal cord. The nerves supplying the body wall and limbs are often called cerebrospinal nerves. The nerves supplying the viscera, along with the parts of the brain and spinal cord related to them, constitute the autonomicnervous system. The autonomic nervous system is subdivided into two major parts: the sympathetic and the parasympathetic nervous systems.

How neuroanatomy is studied

The nervous system is made up, predominantly, of tissue that has the special property of being able to conduct impulses rapidly from one part of the body to another. The specialised cells that constitute the functional units of the nervous system are calledneurons. Within the brain and spinal cord neurons are supported by a special kind of connective tissue that is calledneuroglia.Nervous tissue, composed of neurons and neuroglia, is richly supplied with blood. It has been taught that lymph vessels are not present, but the view has recently been challenged.

The nervous system of man is made up of innumerable neurons. The total number of neurons in the human brain is estimated at more than 1012. The neurons are linked together in a highly intricate manner. It is through these connections that the body is made aware of changes in the environment, or of those within itself; and appropriate responses to such changes are produced e.g., in the form of movement or in the modified working of some organ of the body. The mechanisms for some of these relatively simple functions have come to be known as a result of a vast amount of work done by numerous workers for over a century. There is no doubt that higher functions of the brain, like those of memory and intelligence, are also to be explained on the basis of connections between neurons, but as yet little is known about the mechanisms involved. Neurons are, therefore, to be regarded not merely as simple conductors, but as cells that are specialised for the reception, integration, interpretation and transmission of information.

Nerve cells can convert information obtained from the environment into codes that can be transmitted along their axons. By such coding the same neuron can transmit different kinds of information. 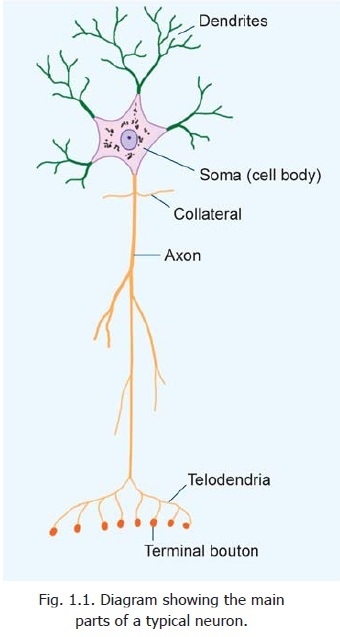 How the Nervous system can be affected by disease

Some knowledge of anatomy is an essential prerequisite for the practice of any clinical discipline, but no where is this more true than in the diagnosis of neurological disorders. The localisation of the areas of the nervous system involved in disease calls for a fairly thorough knowledge of the location of various masses of grey matter, and of the courses of various tracts.

In recent years, considerable advances in neurological diagnosis have become possible by the use of sophisticated imaging techniques like computed tomography (CT), and magnetic resonance imaging (MRI). In interpreting these images a thorough knowledge of the gross anatomy of the head, neck and brain (or of other regions concerned) is invaluable.

Damage to nervous tissue can occur in various ways. Any part of the brain or spinal cord may be damaged by direct injury (trauma). Apart from other obvious causes such injury may occur during child birth. If nervous tissue is deprived of blood even for a short period irreversible damage may result. Localised damage of this kind may occur if one of the arteries supplying the brain is blocked. This may occur by clotting of blood within the vessel (thrombosis). Such an event is more likely in older individuals in whom the arteries have undergone a degenerative change known as arteriosclerosis. A vessel can also be blocked by some extraneous material (e.g., clot, fat, air)reaching it from some other part of the body through the circulation. Such matter is called an embolus. Sometimes an artery may rupture, the blood leaking into brain tissue (haemorrhage) causing considerable damage. A haemorrhage in the brain is often fatal. Bleeding may be caused by rupture of small abnormal dilatations of arteries (aneurysms). Aneurysms may be congenital, or may be produced due to weakening of the arterial wall in the region.

Another cause of brain damage is the presence of any abnormal mass within the cranial cavity. As the cranial cavity cannot expand such a mass inevitably presses on brain tissue. Such a spaceoccupying lesion may be a tumour, a collection of pus, a collection of blood (in the epiduralspace) etc. Apart from producing general signs of increased intracranial tension, local effects are produced depending on the area involved.

Increased intracranial tension, specially when it is rapid in progression, can lead to further brain damage in a number of ways. Swelling of the brain (cerebral oedema) following trauma, or infection, can itself act like a space occupying lesion. Brain tissue is pressed against the wall of the cranial cavity leading to damage. Part of the brain may herniate through a wound in the skull.

As pressure on a region of brain tissue increases it can lead to occlusion of blood vessels and infarctions. When intracranial pressure increases to the level of arterial pressure blood flow ceases and brain death ensues.

Nervous tissue may be affected by infections, both acute and chronic. An infection in the brain is referred to as encephalitis; and that in the spinal cord is called myelitis. Defects in neural tissue may also be caused by maldevelopment (congenital anomalies), bydegeneration in old age, and by various metabolic disorders. Finally, alterations in nervous function may occur in the absence of recognisable structural changes. These are called functional disorders.

From the above it will be obvious that in some cases a neurological disorder will be of acute onset (as in trauma, vascular accidents, or acute infections). In such cases the patient may at first show signs indicative of widespread functional deficit quite out of proportion to the actual area involved. Deep unconsciousness (coma) is often present. In course of time, however, considerable recovery may take place, leaving residual defects dependent upon the area involved. In slowly developing diseases on the other hand, considerable structural damage may occur before symptoms become obvious. In the descriptions that follow we will deal only with signs and symptoms referable to the actual area of lesion.